Chase requested another breakfast for dinner Saturday night, so after much thought and a great collaborative effort, we came up with this scrumptious, lip smackin’ breakfast pizza.

We knew we wanted a whole wheat crust and a tofu scramble type topping. We thought long and hard about the proper sauce for the pizza and finally decided on … sausage gravy! Oh my goodness, I don’t know how Chase made it exactly but it was incredible. He cooked Lightlife sausage crumbles and pureed white beans (like the Tempeh Sausage Gravy from VWAV) and used all kinds of spices including red pepper flakes, garlic powder, black pepper, Mexican oregano, and fresh sage. He rolled out his crust and spread on the gravy – action shot. 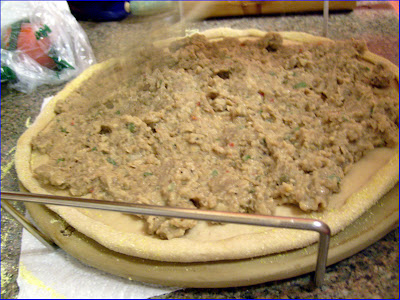 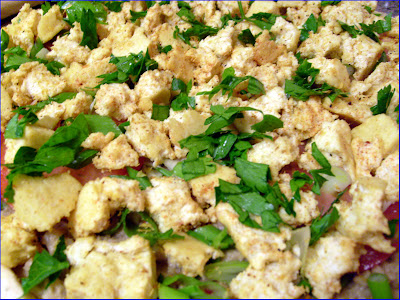 While the pizza baked, I made sweet potatoes and spinach. 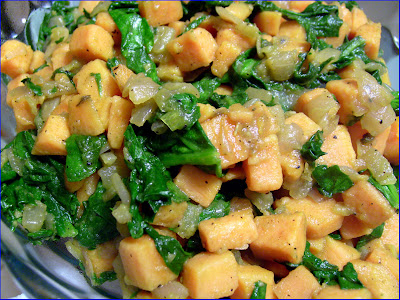 I made black beans earlier in the day to have with dinner. Chase and I both mentioned we like black beans on top of broccoli, so I steamed some broccoli too.

After 20 minutes we took the Breakfast Pizza out of the oven and made it into Breakfast Hippie Pizza by topping it with sprouts and toasted pumpkin seeds. Sunflower seeds would have been perfectly hippie, but I was out of those. 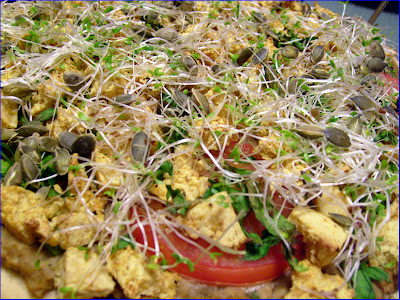 This pizza was so good I had to take lots of pictures. Chase cut the pizza into quarters and took one for his first piece. 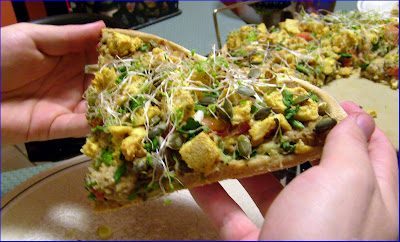 I had a normal size piece. 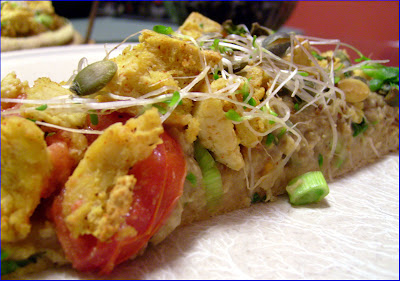 I can hardly convey how incredibly delicious this pizza was. What a great plate of food for me! 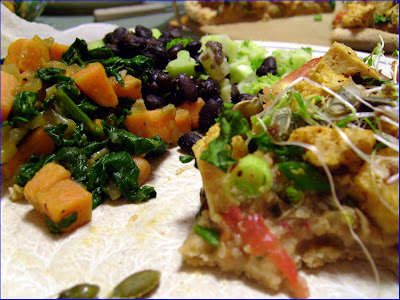 Chase was thrilled to have half of this protein packed pizza to take home. 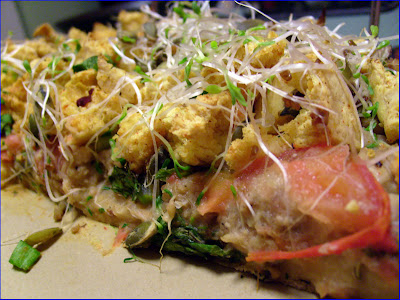 Okay, enough raving and on to dessert. I had been anxious to make Celine’s Peanut Butter Granola. Although I wasn’t sure how I would use it for dessert, granola was in keeping with the hippie theme so I made a double batch Saturday morning. I love anything peanutty and this granola has a wonderful hint of peanut flavor. I kicked it up a bit by adding in craisins and chopped peanuts. It’s so yummy. 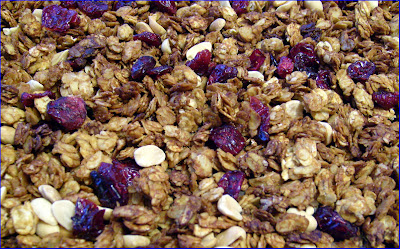 After running some errands, I stopped at my mailbox and was thrilled to find a gift from the ever so thoughtful and awesome vegan Bazu – a bag of butterscotch chips! (She also sent me some of her elderberries which are on standby to ward off the next virus that makes the rounds. Thanks again, Bazu!) I went through my recipes and decided Warm Butterscotch Banana Pudding would be the perfect way to inaugurate my butterscotch chips and complement the granola. It’s a tapioca pudding over a layer of sliced bananas. It thickened up nicely as it cooked, then I kept it in the fridge to thicken further as the recipe instructed. When we were ready for dessert, I retrieved the dish and got a big spoon and began to serve. I just suck at making pudding because it was so thick I put away the spoon, got a knife, and told Chase I was slicing him a piece of pudding! I decorated it with granola and served it. If it had a tasty crust underneath, it might have been okay. 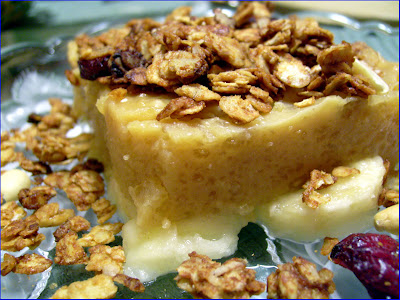 Chase wouldn’t eat it. The pudding was completely flavorless. I was so disappointed, especially since I had promised Bazu I would make something yummy with the precious butterscotch chips. Chase took his leftover pizza and the granola and went home. As I was cleaning up the kitchen, unable to stop thinking about another pudding failure, I remembered the recipe was entitled WARM pudding. I put Chase’s uneaten portion in the microwave for 30 seconds, stirred it a bit, and viola! I had a soft pudding with delicious butterscotch flavor. 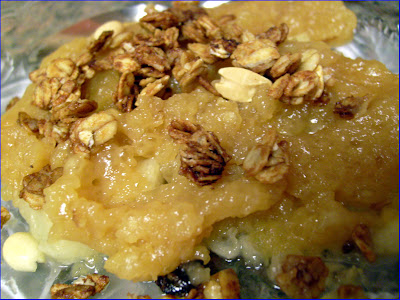 I don’t get why I can’t enjoy this pudding cold, but I accept it. If you like warm pudding, are fortunate enough to have access to vegan butterscotch chips, and want to use this recipe, I recommend serving it straight from the pot as soon as it’s ready. It’s super quick to make and is definitely tasty comfort food. But I’m saving the rest of my butterscotch chips for cookies!

Looks good! Good thing you remembered the pudding was suppose to be warm! I hate when things don't turn out right, but it's wonderful that it turned out in the end!

Ok, first of all, that pizza is unbelievable- I will HAVE to make it soon! By soon, I mean now. I love breakfast for dinner (and dinner for breakfast), so thank you and Chase for the idea!

Second, I'm glad you received the butterscotch chips, and that you had a chance to recoup the pudding! The second (warm) photo actually looks really good to me... perfect for cold nights.

Great idea on the breakfast pizza. The side dishes make it perfect!

Oh, how nice to get a package! Mmm, butterscotch! Nice try on the pudding! The photos make both look good, but I think I'd prefer it warm. Nice save! :)

Ok so that hippie pizza creation looks amazing! So unique and creative- I wish I could have just a bite.

I'm glad that the pudding and butterscotch chips were saved with the hot version!

Thanks for posting it! And that dessert looks delicious too. Oh my. I need a crew of cooking vegan ladies in my kitchen, asap! :P

Wow, even your craisins look psychedelic! That hippie pizza sounds amazing. You need to get Chase to recall the recipe and post it for us :-)
Can't wait to see what you do with the rest of the butterscotch chips!!

that pizza is calling my name yummm!!!

Can't wait to see what you do with the rest of the butterscotch chips!

the pudding looks really good, too bad that cold did not work.

wow! That pizza looks and sounds to die for.. seriously.. I want it NOW!
I wish I could come to your house for Sunday dinner. You always make such a fantastic spread.

Sorry your pudding disappointed.. but cool that you were able to save it.

Ahhh, everything sounds delicious (even the pudding! sorry it didn't work out as you had hoped), but the photographs won't load!! :0( I promise I'll leave a better comment later, when the photos on this post load? hopefully?

YUM your hippie pizza looks delicious -- something I'll have to try. Would make an excellent weird brunch thing I think. :-)

Isn't it funny how some foods are inedible cold or warm but delicious the opposite? I can't stand cold corn tortillas or warm juice, but warm corn tortillas and icy juice are so good!

Your side of sweet potatoes & spinach looks quite delicious; but it's the Breakfast Pizza that REALLY made my jaw drop in awe - yum!! Such fun topping choices too!!

Celine's PB Granola = phenomenal. It's quite delicious when made with other nut butters (such as cashew, almond, or hazelnut) as well!!

That's a shame about the Butterscotch-Banana Pudding - it sounds so decadent and luscious!! But at least it tasted somewhat satisfactory when heated up - oh well. I can't wait to see the butterscotch-chip-cookies that you'll make!! :0)

Haha I SHOULD have instructed readers to dip the sandwich in chocolate! What was I thinking?! I was ignoring my chocolate-covered-roots!

That looks incredible and very healthy. I've been meaning to make a pizza recipe lately. These pictures will kick me into gear!

It actually reminds me of this place in Boston called 'Veggie Planet' where they throw a bunch of tofu scramble and sauce on dough. But I can honestly say, the recipe you and Chase came up with looks a lot tastier. =)

The pizza looks so tasty and nutritious.

The pizza looks great. We got Vegan cheese in our supermarket out the blue and was almost on it's expiry date so I went mad with pizzas, macaroni cheeze etc every day for two weeks as it might be another 6 months before we see it again LOL

Hehe, I love hippie food. I make alot of it now that I work at Wheatsville :) The pizza is such a great idea, and I need to make that granola soon. I'm sorry about the pudding predicament. It looks and sounds great, though. Lucky you for getting butterscotch chips!

tofu, sweet potatoes, and pizza for breakfast? perfect. :) it looks so good, makes me want pizza and a tofu scramble!

your post reminded me of the peanut butter granola recipe. thanks! it sounds like a great recipe!

it's funny you mention the spring rolls - i've had them before too! i agree that they're good, possibly one of the better thai sauces i've tried (i scraped out and ate all the extra sauce from the dipping cup after i ran out of spring rolls!).

I don't think I've seen a pizza that delicious looking in a LONG LONG time. Especially with that much good-for-yous in it! Incredible. -Amy@Wheeler's

I'm Laura, an editor with BlogHer Ads. If you're ever interested in putting ads on your site, I'd love to talk with you!

I would be a hippie anyday for that hippie breakfast pizza! And I will happily eat Chase's portion of the butterscotch pudding...

This pizza looks amazing, I am so going to try making a version. I know I've said this before, but Chase is one lucky kid.

it looks so good; I'd try your recipe
stephanie
lacroquette.canalblog.com

Oh me oh my, how I loved butterskotch in my pregan days. Peanuts and bananas! Wow!

Hippie food is amazing. Unless its Happy Meat.