Some of you may remember Chase’s pet rabbit, Smokey. Chase got him about a year ago when he just a baby bunny. 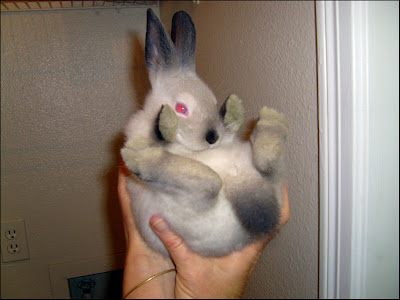 Smokey stayed with me this weekend while Chase’s air conditioner was being repaired and while he tended to a hectic work and summer school schedule. This is Smokey today. 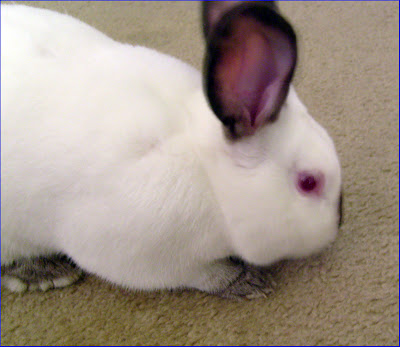 It was hard to get a good shot of him. He liked to jump back and forth over my legs, lick my ankles, then jump some more. Chase says that means he loves me. He’s a beautiful rabbit. He’s very quiet and very sweet and will stare right into your eyes. He also helped me do six loads of Chase’s laundry!

Coincidently, my internet went out yesterday morning. I checked all the cords to make sure Smokey hadn’t unplugged anything. They seemed fine. I asked Chase to buy me a new modem today, which he did, and then he came over for dinner and began to install the modem. I told him I was sorry that I had initially blamed Smokey for the problem. Chase looked at me, stopped what he was doing, and went into the room where Smokey had stayed. After carefully inspecting the phone cord, he found a spot with little rabbit teeth! I took back my apology, got a new phone cord, put the old modem back in, and here I am. Anyway, Chase’s air conditioner is fixed and Smokey is now back home with Chase.

While Smokey was here, I made lots of trips to the fridge for lettuce to feed to him. He’s like me and especially loves the purple variety of oak leaf lettuce. I think he inspired me to make two very yummy salads. This salad also had roasted yellow peppers, olives, and cherry tomatoes, and I used mixed greens instead of just spinach as suggested for a variation – delicious! 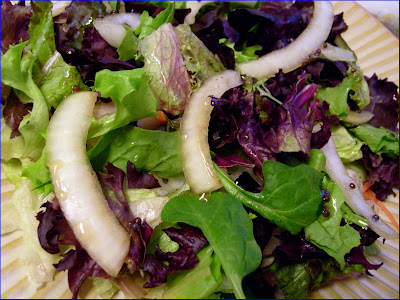 I did try another recipe from Ani’s Raw which was a complete, into-the-garbage can failure. I mostly blame myself. The Lemon Coconut Bars sounded so wonderful, but there is only one step of instructions included, and the recipe calls for 1 Tablespoon of sea salt. I don’t put a whole tablespoon of salt into anything. So, thinking I don’t know anything about raw food prep, but not really wanting to use so much of my sea salt, I only put in a half tablespoon. It smelled heavenly, but oh, man, it was inedibly salty. I should have known better. I wasted a whole cup of expensive raw almonds and I was not happy.
Still wanting a raw treat, I remembered Ruby Red Vegan’s homemade larabars. These are a smashing success! 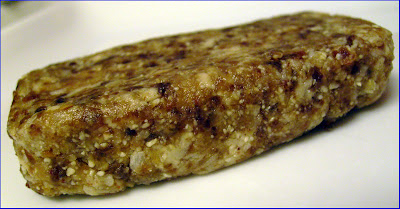 I also tried my own version of raw treats. I baked them in the sun, then refrigerated them. They turned out really nice and I will post my recipe later this week.
Chase dropped the Take n’ Bake Breakfast Pizza Pie I made for him. So I made him another one and baked it myself. 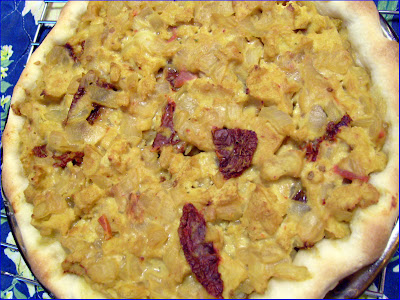 He took it home with him when he picked up Smokey and said he would eat it that night and let me know how it was. Thankfully, he loved it. He said it tasted like mac n’ cheez on a biscuit and he ate the whole thing!


I’ll be back later in the week with a post about tonight’s dinner and perhaps a couple of recipes. I missed checking all your blogs yesterday! I just hung out with Smokey and watched a little tv and stayed cool in between loads of laundry. 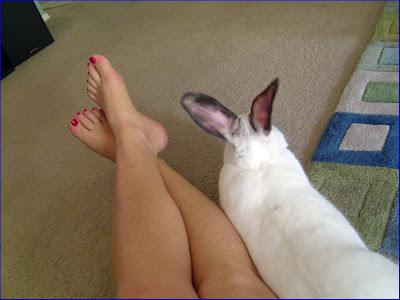 Aww Chase's bunny is a cutie!!

I have to make me some of those Larabars, I'll be saving a ton of money!

Awww...What a great lil' buddy to spend the day with! Smokey looks so soft and cozy. I'm sorry he chewed your telephone cord!

That's a shame about the lemon coconut bars. At least you'll be able to adjust the salt for your next batch!

The salads look colorful, as always.

You can't beat raw food in the summer!

That bunny is so darn cute! Sorry about your phone line, though. :( 1T of sea salt does sound like an awful lot, that's crazy!

How funny! The same thing happened to me when I made Ani's Lemon Coconut Bars. I knew 1 tbs. of salt didn't sound right so I added only half. The results were terrible so into the trash it all went. I hate wasting food like that!

Too bad on the coconut bars, but thanks for the warning!

Bunnies: Our Skippy (who turned out to be a wild one, not a lost pet) loved onion peels, apple cores, etc -- very symbiotic. And he loved to chew cords (yes, we lost a phone cord too), books, furniture legs, etc. We still have the evidence, even though Skippy left our lives about 15 years ago.

Chase's bunny is so adorable!

We love Larabars and plan to try this recipe soon!

Mmm, the Spinach, Artichoke, & Chickpea Salad, as well as the salad from Ani Phyo (loooove her recipes) look divine.

Oh no! Too bad Chase dropped the pie - luckily mom came to the rescue with a new one! :0)

Such an adorable cuddly bunny. I wanted to reach through the laptop screen and pet him :)

Great job on the raw larabars!

What an adorable rabbit!

yay for homemade larabars.. I am so going to check out that recipe.

I made my very first raw "bread" today at work! woohoo.. no pics on my blog though.. I need to bring my camera to work. I used the carrot and beet pulp from juicing and when I left today after dehydrating all day it was pretty good. I'll check it Thurs (I have tomorrow off) .. I'm planing on a raw pizza special! woohoo! I'm so excited.

I rescued a bunny when I lived in China, and we named her "Tutu" (which means "little rabbit" in Chinese). But *little* Tutu soon grew to be the BIGGEST bunny I've ever seen!

Smokey is one awesome bunny! I'm used to bunnies being nervous and spazy. But Smokey seems real chill. Even though he nibbled your wires! Haha

I need to eat more salads and more leafy greens. I don't know why I've been so lazy about it. I'm just plumb unhealthy. :-/

I can't tell you how many times I've put waaaaay too much salt in a meal. I've learned my lesson now and will never, ever do more than a teaspoon!

Smokey seems like such a cool rabbit! I can totally picture him hopping back and forth over your legs - super cute. Chase is so lucky to have a mom like you, too - that breakfast pie looks awesome!

Rabbits are very good at laundry.

I find that sea salt goes a long way, especially if you don't eat it a lot. The Donut Holes recipe from Ani's Raw Food Kitchen is gold, I hear. Haven't tried it myself but Kati at Vegi Voice did.

What a cute bunny! I love your blog.

ehy man, i love ur blog and i often visit it. you know, i've one too, when u wanna see mine click here http://lilthing.splinder.com/ and if u wanna leave me a comment i'm thankful. xo xo, enjoy ur day.

I love that last photo! That is one long bunny, but he has good eating habits!

Funny story about watching Smokey and the tiny teeth marks in your cord! He is so cute. I once owned a rabbit. Liked your photo of the feet and Smokey's ears ... nice composition!

Wow, both of your salads look delicious... I've been eating lots more salads lately with the temps climbing (as well as our electric bill!)

That's so cute how Smokey is lying by your leg in the last picture, he looks like a great bunny to have around. And your "rabbit food" all looks great!

the bunny is so adorable...I wish to have one.

OMG... I melted with the sight of that little button nose and those paws!!! <33