The August 2009 Daring Bakers' challenge was hosted by Angela of A Spoonful of Sugar and Lorraine of Not Quite Nigella. They chose the spectacular Dobos Torte based on a recipe from Rick Rodgers' cookbook Kaffeehaus: Exquisite Desserts from the Classic Caffés of Vienna, Budapest, and Prague. 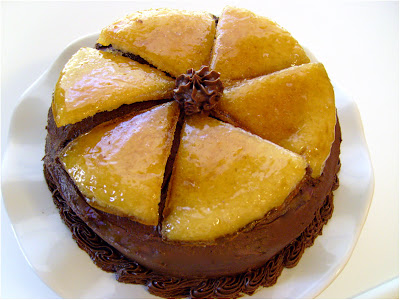 A Dobos Torte is a six-layer cake with a caramelized layer of cake for the topping. It is quite rich with chocolate buttercream between the thin layers of sponge cake. As you can see, it is beautiful. I had visions of beautiful finishing touches for my cake, but kept it simple on my smaller, six-inch version. The cake was quite time-consuming. I would say from prep to cleanup was a good six hours. I baked the cake layers one day, and finished the next.

The original recipe is heavy on eggs and butter, so for my vegan version I used Bryanna Clark Grogan’s sponge cake recipe, and VCTOTW chocolate buttercream. I normally loath and despise buttercream, but I actually liked my recipe using Smart Balance instead of EB, and my favorite Scharffen Berger cocoa. I also made it mocha flavored by using strong coffee instead of milk. The sponge cake was fun to make since I got to make vegan egg whites. It really worked! 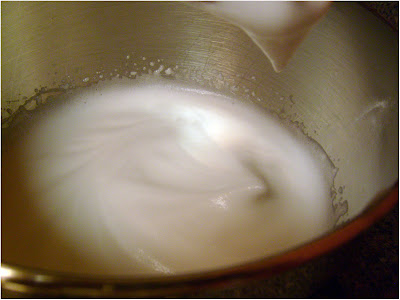 This was the first time I made cake layers without a cake pan. I drew 7-inch circles on parchment paper and spread the batter onto baking sheets. 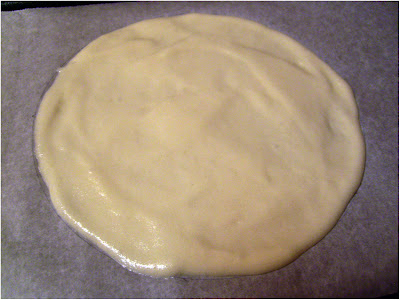 This is how my kitchen looked when I was making the cake layers. 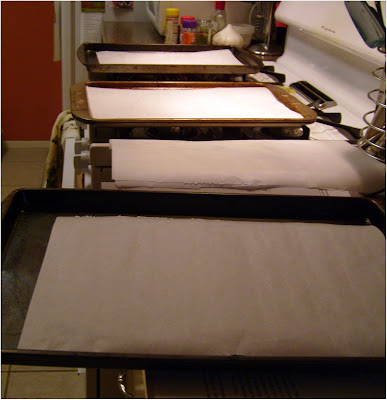 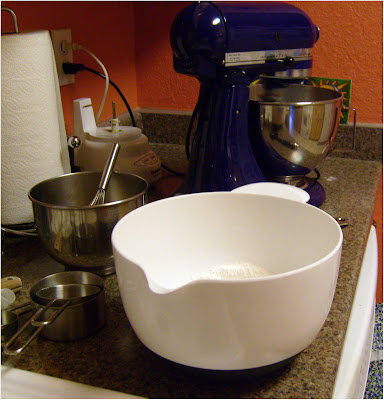 As I said, I finished up the next day and the cake turned out just lovely. 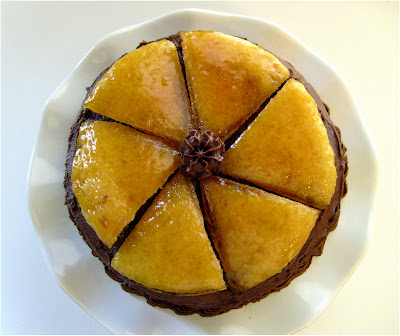 I took it to my mom’s (I try not to keep such decadent desserts at my house!) and nervously plated a slice. 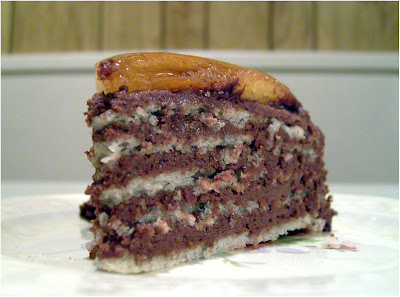 Rich and delicious. I’m always amazed when I complete a vegan version of these fabulous challenges.

You can read the full recipe here.

If you have several hours to spare, make yourself a vegan or nonvegan Dobos Torte and I’m sure you will enjoy it.
Posted by aTxVegn at 5:56 PM

Wow, that looks amazing!!! Sounds like you did one fantastic job, way to go!

That's gorgeous and I'll be it tastes even better!

Beautifu job! It sounds like it was a lot of work, but it looks just amazing, Diann.

What a fantastic effort. I love how you've done it so effortlessly!

oh my gosh!!! what a beautiful creation! It sounds like quite a labor of love, and yet you really do make it look so easy. Incredible!

Well I'm impressed, with both your patience and skill. The cake looks beautiful and I imagine the taste was delicious. This is one cake I'll have to admire from a distance. It really looks amazing, Diann!

so beautiful! your caramelized topping cake pieces look so glossy and yummy, and that *slice*, egad, rich or not I want it ALL. :P

your torte looks absolutely perfect, Diann! wow! you are just too awesome - i love it! (and now i'm really hungry! ahahahahahhaaa!)

It looks like the perfect special occasion dessert--and some of my very favorite flavors combined. Great cake! :)

wow! that looks super complicated - congrats to you for taking on the challenge. i would love a bite!

Your torte turned out awesome! Yum!

This looks amazing! Congrats on another successful challenge. Very clever to think of spreading out the batter for those thin layers.