Fresh Foods and a Good Burger

We have some rain in the area and the temp has dropped 20 degrees! Although it hasn’t rained at my house yet, I did get to enjoy watching a nice shower from my office downtown. The heat and drought has taken its toll for sure. Here’s a portion of my last CSA box. 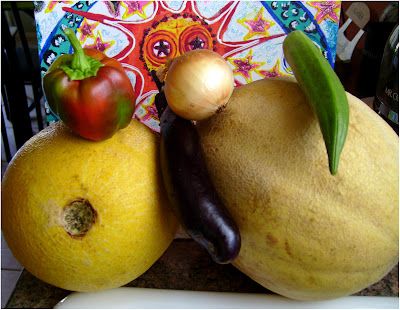 Two nice sized melons, and very puny onions, peppers, eggplant, and okra. Pretty slim pickin’s. You may remember that okra (eggplant too) has never been a favorite veggie of mine. I read recently about a cooking method that promised to take away the slime. I started with 2 tablespoons of olive oil, added some thinly sliced onions and okra, and basically cooked the crap out of it. It worked – there was not a bit of okra slime. 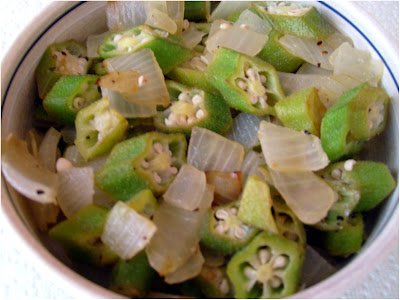 However, there was definitely oily slime and that didn’t appeal to me either. I’ve still got a bunch of okra and I’m going to try again with half the amount of oil and see if some broth will work just as well.

I’ve still been eating lots of fresh salads. One I’m particularly fond of is Tomato, Mango, and Avocado, and just a pinch of sea salt. 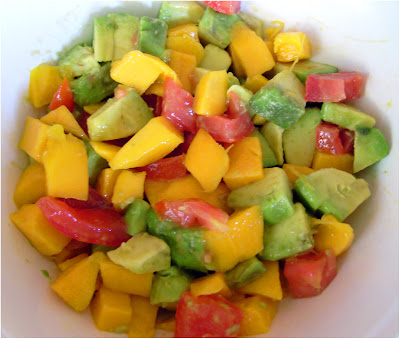 It’s heavenly, and something I almost always have on hand.

My usual salads are a combination of greens and beans. 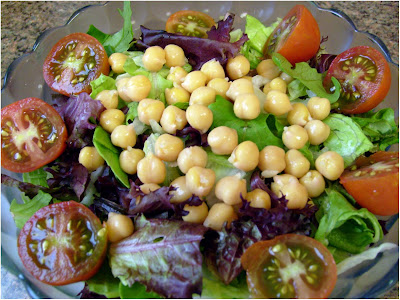 There is still a bit of squash and zucchini at the farmers markets, but not near the usual squash overload typical of the summer season. I made the Salsa Verde Yellow Squash from VegTimes, and it was pretty good, with onions, garlic, black beans, and cilantro. It called for tomatillos, but I only had tomatoes. 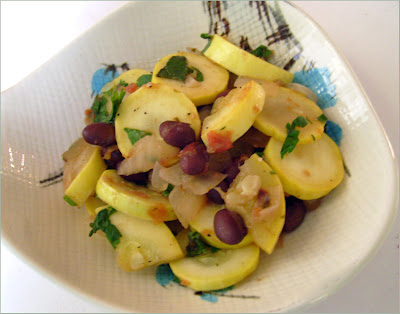 Most of you know I’m not a fan of packaged foods, but I do buy them for Chase. I found the new Vegan Gardenburgers at Costco and bought him a big ol’ box. My mom even bought herself a box. The picture on the box looked really good. 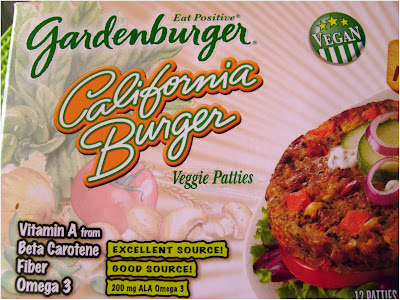 I saved one for myself to try. I sautéed it and got all my toppings together, then wouldn’t you know I couldn’t find any bread in my house. Except some leftover gluten free cornbread I had frozen. I didn’t actually get to eat a burger, but I built myself quite a monster. 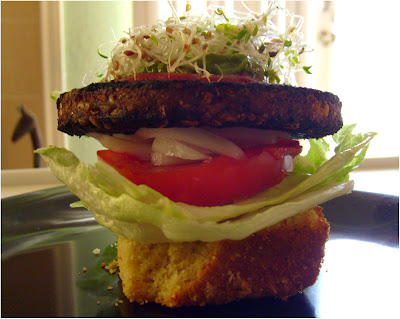 Hang in there with the cooler weather!!

that is a monster non-burger!

i'd like to know if your okra turns out non-oily this time around. i love okra, but have a hard time with the sliminess it can have when not fried. let us know!

Lol! I love the height of the burger!

The mango salad looks awesome! What a good idea! I'd not think to mix those ingredients, but it looks SO good!!

Okra's not my favorite either but your salads are very appealing. I love chick peas and salad greens. We went out for a quick dinner tonight and I had a portabella burger with sauteed spinach and peppers on it. It tasted great.

Mmmm I love mango and avocado so that salad is tempting me!

And love the giant burger! I wish we got garden burgers in Australia :(

I love those burgers.... They are so delicious! I wonder what cornbread would taste like with a veggie burger... I have to try!

we're the first. Your pics makes everything look VERY tasty and oh, that was the other thing, she said your recipes WERE tasty. We need to replace our bread, bagels, pasta (son a big pasta lover),pita bread and tortilla..
who knows, I might eat more healthy in the process [s]

oops..messed up the message..I thought I cut and pasted it (husband was signed in) but I apparently only got half the post. Pfff..
anyhoo..you came highly recommended by a neighbour as we found out that we have to change our diet to go gluten-free. She visits your blog, enjoys the recipes and knew that our son (11) had also egg, soy and nuts allergies (plus some of this 'n that here in Austin)..I'll add you to my favourites and once school starts in full force..i can sit back and 'really' enjoy reading through here.
voila. That was sorta kinda the first part that I missed..[g]

Your monster looks delicious! I'm not a fan of eggplant either. I don't know what it is exactly about it. I think it's part taste, part texture. I've tried it numerous times over the years and I think I'm better off without it. I've only ever had okra is soups and stews and I like it.
Top Chef Masters! I love it! I think I'm behind on some episodes, because I TiVo it. I watched last night and they are down to 3. I like Rick or Hubert Keller.

And I love that pic of stuff from your CSA box - the onion looks like a head on top of a melon body, with eggplant/okra for the arms!

As far as the okra is concerned, I'm sorry you didn't have much luck. I don't think I've actually ever tried it before, so I'm not sure how to solve the okra slime/oily slime problem... ick!

Hi Diann, I just saw your comment on a another blog and noticed how you spelled your name!! My mom spells her name the same way, and I've never seen it spelled like that before!! I don't think she has either. So neat!!

I HAVE been watching Top Chef Masters! I'm very excited for this week - to see who wins, and to see the new season of Top Chef. Definitely one of my favorite shows.

Sorry you're getting puny veggies in your CSA! Hopefully the gardens down there will perk up soon.