Earlier in the week I made Leslie's Gypsy Soup. I followed her recipe exactly, except I used all sweet potatoes (didn't have any white potatoes), so mine is a little darker than hers. The soup is really, really, really good. I know there are some variations on different blogs, but Leslie's combination of spices really makes this soup rock. See Leslie's version here http://eatpeaceplease.blogspot.com/, which was adapted from Kris http://squirrelsvegankitchen.blogspot.com/, who adapted from somewhere else...... 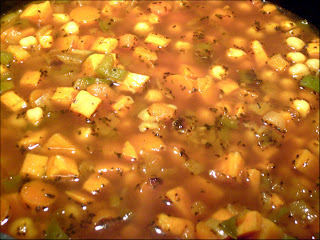 I made Nava's Oat Walnut muffins to eat with the soup. I didn't put in quite as many walnuts and instead sprinkled some hemp seeds on the tops. These I couldn't get enough of cuz they are awesome! 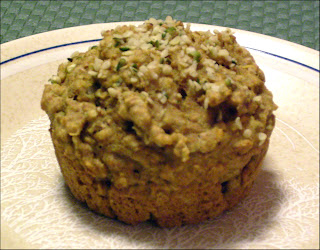 Last night I made Susan's Mini Crustless Tofu Quiches http://blog.fatfreevegan.com/2006/12/mini-crustless-tofu-quiches.html. They are every bit as delicious as she described. She left out one important piece of information though. Instead of putting the mixture into the muffin cups, you could just pour it into a bowl and have yourself an awesome dip! I'm not kidding - the batter is as good as the quiches!

On Saturday (when it was literally freezing) I went to the farmers market and got some beautiful veggies. I got sweet potatoes, apples, Brussels sprouts, giant broccoli and cauliflower, and greens - Russian red kale, and my favorite salad greens, mizuna and arugula. 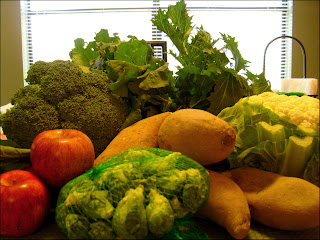 Let's have another look at that broccoli! 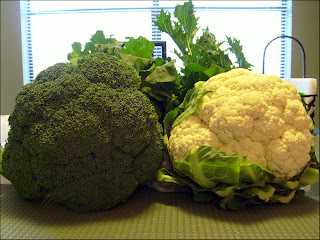 I sauted the kale and added in the leftover quiche veggies to have with the mini quiches. Isn't this kale beautiful!!! 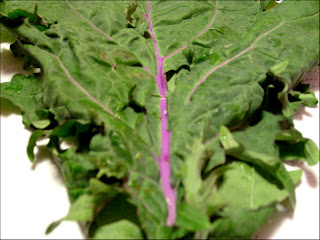 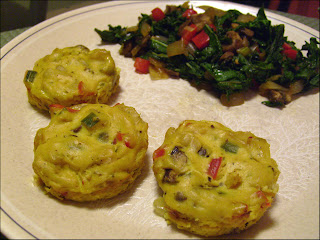 I also shopped at Whole Foods and the asian market. I got some weird whole grain soy sauce at the asian market and the yuba sheets. I had a finger taste of the soy sauce and nearly gagged. Chase said he used less than a teaspoon for a giant stirfry and he loved it - said it tasted like Bragg's. So it's obviously very strong. I will certainly get my money's worth, if I'm ever brave enough to try it again. I should have taken a shot of the back side of the bottle. It lists all its nutrients, like Bragg's, including B-12. 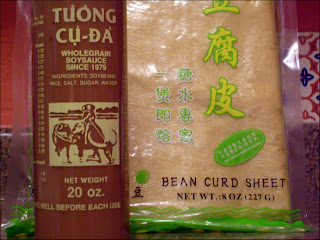 I also baked a whole wheat loaf and gave it to Chase. I didn't have any, but he assured me it was as tasty as it looked.

I made a stirfry using the Massaman red curry paste Megan blogged about. I used broth instead of coconut milk in my stirfry, so mine is really red! http://meganthevegan.blogspot.com/ 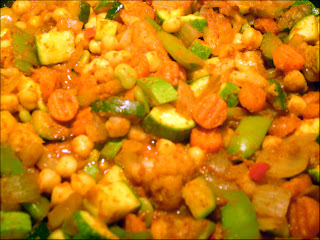 For Ben -- I hope you can find some GF baking mix soon. Here's what to look for. 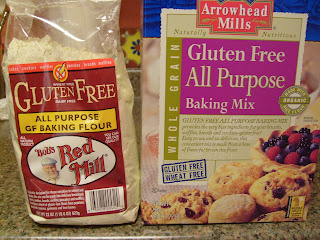 And as promised, my recipe for White Chili:

In a soup pot saute the onion and garlic in the olive oil until soft. Add the potatoes, water, broth, and seasonings. Cover, set heat to low, and cook about 20 minutes until potatoes are tender. Add one can of beans, then puree the whole pot. Add in the second can of beans, chilies, and tofu. Check consistency at this point. Depending on how much water you used, you may need to add a cornstarch slurry (I did). Continue to simmer for at least 20 more minutes. Taste for seasoning before serving. We like heat and kept adding more chili powder, so our chili became less and less white! We served the chili with fritos, cilantro, and salsa.

Wow!! Everything looks so delicious!! Once I get this graduation thing over with (still have exams to push through), I'm going to do a lot of cooking! I have that mini quiche recipe saved...I'm so excited about it!

Everything looks great. Your bread looks perfect. I saw the mini quiche recipe on Susan's blog but I'm still a little scared of tofu....maybe I need to try it afterall.

Wow, what a great looking slew of things! I am so happy you love the gyspy soup as well. I have 5 servings in the freezer (hoping it freezes well). Glad you stuck with my advice on the spices.

Your cranberry apple muffins are beautiful! The colors are amazing and I am sure fresh cranberries are wonderful. I've never tried them. Thanks for the chili recipe, I hope to try it soon.

I am SO making that chili soon! :)

OK, first: I don't mean to brag, but Bob's Red Mill is located in Milwaukie, OR, which is the next town south of Portland. If you ever do come here, you have to go to the Red Mill - it really IS a red mill. They have a whole section of GF stuff, and are the largest distributer of whole grain products in the US. When I was GF this summer/fall, it was a godsend.

Second: I have a bag of fresh cranberries, and was wondering if you can use them in baked goods. Is that what you did? If so, looks like it works fine (I don't know why I'm so hesitant about this, I guess I just never saw anyone bake with fresh cranberries before). Do you need to add extra sweetener to the batter, or something like that?

Sorry this is so long :P

MV - I realize many people are afraid of tofu. I think starting with the silken tofu like in this recipe would be more palatable for you. It's so smooth and creamy, not at all scary!

Leslie - I didn't have any leftover soup to put in a freezer! It really was delicious. And like I said before, there are more of your soups I will definitely make.

Erica - See why I need to get to Portland! For the fresh cranberries, I rough chop them in the food processor, like 2 pulses. And for sweetener, I usually add only 1/4 cup sugar/sweetener to banana muffins, but with the cranberries, I use a half cup. So you don't need "extra" sweetener, but you can't really use less like I usually do.

this is such a post full of wonderfulness! I love that you made muffins to eat with the soup what a great idea! I"ve also been eyeing the mini crustless tofu quiches on susan's blog. I'll have to figure a way to get Peter to eat those. Your broccoli looks like it's bigger then my head and I wish I could grab those brussel sprouts right out of the screen. And your bread and muffins and massaman...it's all fantastic!

ATX, I love the way your mind works, at least cooking style-wise. Your groceries and eat habits are beautiful!
Leslie's gypsy soup needs to be made in my house, I wonder if my boyfriend will eat a soup with sweet potatoes..we'll see..

Wow, you actually had the initiative to cook all the things (quiches, gypsy soup, etc. ) that I've had my eye on! Everything looks wonderful.

Let's hear it for Mizuna! I love strong salad greens.

You know, I didn't think I liked yuba (I've only had it at restaurants, just kinda floating on top of soup) but you make it look and sound so good, perhaps I should give it a go at home...?

P.S. I have always wanted to visit Bob's Red Mill's actual mill, as Erica mentioned. I just love all the Bob's stuff.

You have been one busy lady. All of your food looks great - and like Bazu, I've had my eye and mind on it as well. So glad to hear about the quiches. I think they're so cute and would be perfect for a brunch or potluck or quick snack. I love photographs of fresh produce. It's so colorful.

Yes, you are so busy! All the foods look great. I am restless to make those mini quiches! Lol! I know Britty would eat them too. (But I'd eat most, I'm sure!)

Those quiches ! I can't wait to try them !

wow all looks so alive and good! yum

I am pretty impressed with the quiche. I can tell you are eating well over here. YuM! Wish I were still in the fresh veggies our markets close in October and open again in May.

I saw those quiches over at Susan's blog too, and I am amazed! They just look so good. I love that shot of the produce. There's nothing like bringing home a load of fresh produce.

YUM, everything looks so tasty. Thanks for the links.

Mmmm your recipes look delicous!
you have Great blog from Jeena :)