The Good, the Bad, and the So-so

Tonight we had an interesting pasta meal. We made Pasta with Sweet Potatoes and Roasted Red Peppers from The Complete Vegan Cookbook. It's a puree of sweet potatoes (grilled, but I just boiled mine), topped with roasted red peppers, and served over fusilli pasta. I love sweet potatoes, but not sweet, so I did not put nutmeg and mace in the puree. We're so used to a veggie filled tomato sauce, we wanted more ingredients. So we sauted some onions and seitan to add to it. It was different and very pretty, but it just wasn't quite what we wanted. Chase and I thought about what we could do to make it better, and we decided we missed the tomatoes. So next time we'll add some roasted or sundried tomatoes. We did enjoy the fresh parsley and squeeze of lemon juice over the sauce, and we both agreed that using the quinoa bread to soak up the sauce was the best part! So this dish was just so-so. 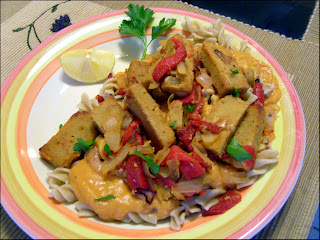 Along with our usual steamed broccoli as a side dish, I made Marinated Cauliflower and Edamame Salad from the Fatfree Vegan Recipes index. I did substitute sundried tomatoes for the fresh tomatoes, so it's not as pretty, but it was quick and easy to make and this dish was good! 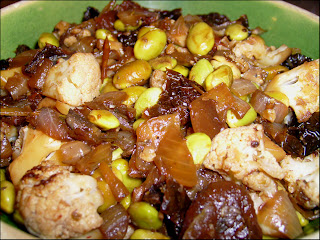 I wanted to use my farmers market Meyer lemons to make dessert, so I made Susan V's Calamondin (or Lemon) Pie. I just made the filling and put it in a store bought graham cracker crust. Chase loves that crust and they come with those nifty lids so it's easy for him to take home. Anyway, I don't know what I did wrong, but I made glue. The instructions for the filling say to cook and stir for 3 minutes after it comes to a boil. Well, after just 30 seconds it was unstirrable. I went ahead and put it in the crust and it was tearing up the crust, and it was so sticky I couldn't get the top smooth. I remember thinking a 1/2 cup of cornstarch seemed like a lot, but I put it in the fridge to set (as if....) 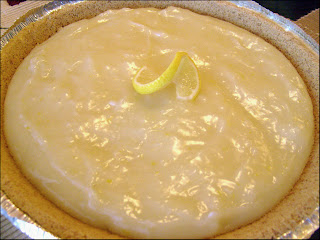 It sliced easily and of course it held together. We spent some time taking a nice picture. Then Chase took a bite and didn't say anything. I looked over at him and he said "It's like jello." And it was. It wasn't creamy at all. It was rubbery and so not what I had in mind. The lemon flavor was great, the texture was bad. Maybe my pan was too hot????

Here's what I will throw away, along with uneaten slices :( 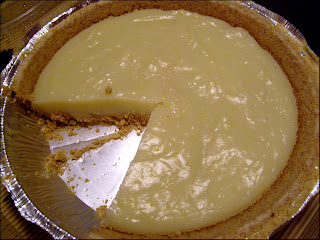 I have a bird update. Two weeks ago 63 dead birds were found within a 3 block area of downtown. Two vet reports have come in and they both conclude that this particular flock of birds was infected with parasites. The birds had not eaten in approximately 2 days, and that, coupled with the drop in temperature overnight, caused their deaths. There was no bird flu or poison or fermented mistle toe - that was one of the rumors going around. The vets said the only thing unusual about this incident was that the birds ended up in the middle of downtown.
The bird incident was 2 Mondays ago, and I couldn't go to work until 2:00. Last Monday I went to work, then got sent home because our roof had collapsed in 2 spots. I'm wondering what I will walk into tomorrow.
Posted by aTxVegn at 7:33 PM

Wow, that cauliflower dish looks great. I'm not sure I'd like that sweet potato sauce either, I'm not big on sweet at dinner time, at least not as the main part of a meal, maybe as a side dish.

That does seem like an awful lot of cornstarch. Too bad that didn't work out.

I hope you have a fabulously boring and uneventful Monday tomorrow! :)

Did you add agar? I notice that in the Calamondin Pie Filling recipe, it calls for agar, but if you follow the link to the lemon pie recipe, it doesn't call for it. Maybe that's the difference...I have no idea. Agar is tricky stuff.

The sweet potato sauce sounds interesting. I'd like to try some non-tomato based sauces for pasta.

Your pie looks beautiful - too bad it didn't taste as good as it looks! And that bird incident is very bizarre - I've never heard of such a thing. Hopefully today will be disaster-free for you at work!

Ugh, sorry about the dead birds and the glue pie, but the cauliflower dish sounds super yum! :)

It makes me so sad to hear of desserts being thrown out. It was really that bad, was it? Hope it didn't take you too long (or cost too much) to make. Poor, poor pie.

The Marinated Cauliflower Salad looks great! What a bummer about the pie :( At least it photographed well. LOL Hope you're feeling better.

Thanks for the update about the bird situation. That was so sad. I'm glad it didn't have anything to do with bird flu.

The cauliflower dish looks so great! I'm sorry to hear that the lemon pie was a dud. Too bad. It certainly looks nice.

I'm glad that the bird incident ended with a natural cause and not poisoning or something sad/creepy like that.

The pictures of your dishes look good so, I am happy for your good, sad for your bad and so so. I have had those days when everything I cooked turned out to be bad or so so. Just not what the doctor ordered. My friend gave me a whole bag of Meyer Lemons and I was thinking of making Susan's pie too. Now I am not too sure. I am going to go read the recipe and her posts and see if anyone else had the same misfortune. I am so sorry for the birds. That would break my heart. May you have a great day tomorrow!

Oh my! The roof at your job and birds, sorry to hear this. I hope your next few days are uneventful also. To bad about the pie, the pictures look so pretty. I made a lemon one from Bryanna's Vegan Feast site sometime ago that I thought was nice and creamy, it called for silken tofu. I liked it, but I remember it had a very lemony flavor.

You asked me about the lunch box I have been using. I got mine off of e-bay, but they can also be purchased directly from

I paid the same on e-bay (once the shipping was calculated) as I would have on the site above.

woe so strange about the roof and the birds!

I love cauliflower! Almost as much as broccoli really!

Sorry about the pie, it LOOKS good though!

So sad about the birds. What an odd thing.

You always make such good looking food! Even the pie (that wasn't good) looked good!

Too bad about the pie, but it did look yummy! Sorry about the birds

Hmm, I'm curious about that pie. Every single one of the recipes I get from Susan are unbelievably good. I wonder what happened here?? I think it looks really delicious..too bad it was glue-like. :(

Good luck going into work! May you not encounter bird death or a collapsed roof!!!

I'm with Judy, I get strangely sad at the thought of food being thrown out. R.I.P. weird glue pie!

And thanks for the bird update. I think it's so puzzling and sad. Hopefully that's the end of it.

I'm sorry that the pie didn't turn out well :(

Hopefully, your Monday was uneventful and the rest of your week went well.

I'm sorry your pie didn't work out but it still looks good.

I agree, the pie does LOOK good, too bad it didn't taste good. Thanks for your comment by the way. It was very encouraging to read of others who follow ETL. I think that sweet potatoe sauce looks and sounds really good--I love sweet potatoes! :)