Tonight we had a delicious mexican meal. Our main course was Susan V's Sante Fe Spaghetti Squash Casserole. I made this casserole shortly after Susan posted it, but I gave it all to Chase without having any myself. I'm glad I got to eat it tonight because, like everything Susan creates, it's wonderful. Here's a shot of the filling, before the cornmeal topping went on. Isn't it beautiful! 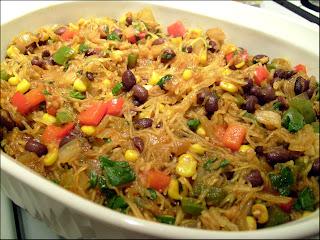 This is the casserole right out of the oven. 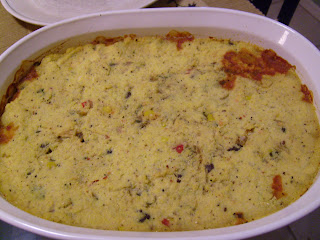 To go with the casserole, I wanted something crunchy. I decided on texmex springrolls. Chase said chips and guacamole would have been good, and it would have been excellent, but I wanted a healthier accompaniment. I have never made springrolls - only rice paper rolls - to be gluten free. I made up a filling of green onion, red pepper, spinach, corn, cilantro, and pinto beans (I had just made a big pot), and lots of spicy seasonings. We filled one dozen, and then baked them. I added mango to our favorite salsa to serve with the spring rolls. They didn't turn out too pretty (don't laugh Megan!), but there wasn't a single one left over. Baked rolls are just as crispy as deep fried and we really enjoyed these. 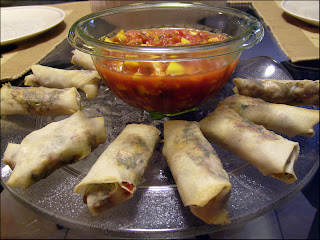 There wasn't much left of any of this meal. 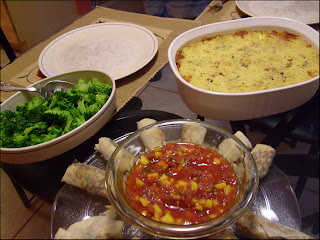 I was determined to make a good lemon pie after messing up last week. I followed Susan's recipe again, except I used 4 Meyer lemons and 1 blood orange for the juice. I even made the oatmeal cookie crust, which was super tasty. I barely filled the tip of my quarter teaspoon with agar agar. This time the filling was stirrable while cooking, and I could actually pour it into the crust. 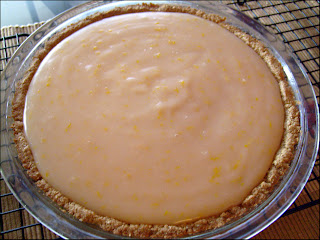 The filling flavor combination of lemon and a bit of orange was soooo good! I had a little left over and put it in a small bowl. Several hours later I decided to see how the leftover tasted, and I was disappointed again. 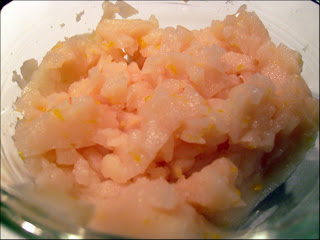 I had jello again. I did NOT want to throw out another pie, because I loved the flavor. Then it dawned on me. I didn't screw up the recipe, and Susan's recipe isn't bad. It's just that Susan's recipe wasn't for lemon CREAM pie, which is really what I wanted. I think Candi left a comment on my last post that any of Susan's recipes she has made turned out great, and same goes for me, and I've made a lot of them. Anyway, I decided to make a quick trip to Whole Foods and get some whipped topping so I could have the kind of pie I wanted to serve. It really is a beautiful and delicious pie, especially with that crust! 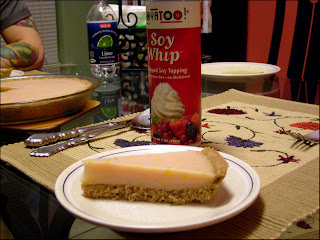 The topping did the trick (although it does take away a little flavor). Here is Chase's SECOND piece. 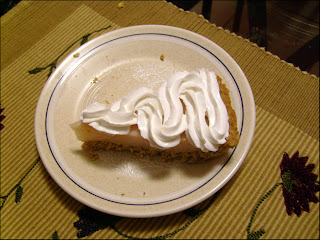 Before I thought of the whipped topping, I thought I had better make a backup dessert. I decided to make Banana Oatmeal Cookies from Vegan Lunchbox, which commenters raved about. The cookies are simply oats, bananas, sunflower seeds, dates, baking soda, and cinnamon. I deviated slightly and used half sunflower seeds and half peanuts, and I added in two teaspoons of raw chocolate. These cookies are addictive little bites of heaven. I absolutely love them and highly recommend these healthy treats. 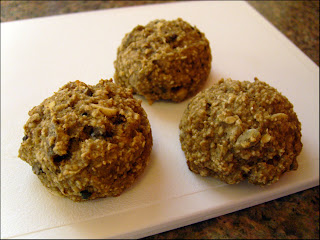 Hope you all had a great weekend! Is anybody into Super Bowl Sunday?
Posted by aTxVegn at 8:09 PM

Oooh, that casserole looks so yummy. I want to make something with a cornmeal topping- that would be so comforting. And your pie looks so pretty, this time with the hint of pink. I'm glad it worked out for you somewhat better this time. You guys sure eat well!

yum, the food looks good, im happy that the topping did the trick !

Oh how I could eat something like that casserole right now !

You always make me hungry LOL

The pie looks great! And those spring rolls sound so gooooood. Thanks for the idea!

wow, that casserole does look good.. sadly my little ones like all squash except spaghetti.. try try again, huh?

The baked springrolls sound fantastic!!! Glad you were able to fix your second lemon pie. It looks tasty.

I just love spring rolls! Putting a texmex spin on them sounds like a great idea. You should definitely try the Fat Flush tortillas - they are my favorite and bake up nice and crisp in the oven.

Glad you figured out your pie situation. It looks even tastier than last time!

I'm going to have to try that spaghetti squash casserole - I'm always looking for new ways to eat that veggie.

The pie looks great, and maybe all it takes to enjoy it is giving it a different name.

Everything looks soooo good! The squash casserole seems to be a hit with everyone, including me. That is right up my alley. And TexMex spring rolls! What a great idea.
The pie and the cookies also look delicious.
Not a football fan, so I'll probably catch up on my TiVoed CSI's. If you're having/going to a party, enjoy!

Tex-Mex springrolls! What an inspired idea! I am absolutely in awe at your creativity, and I will have to try this soon.

Thanks so much for the kind words about my recipes. I'm sorry that the lemon pie wasn't the type you were looking for--you're not the first person to say that they were expecting a cream pie. I will have to get to work on creating a truly creamy lemon pie...right after I lose all the weight I gained last year! :-)

I love the spring rolls idea! The casserole and the pie look wonderful!

Hey, smart move with the addition of the soy whip to the pie! That sounds delicious! The whole Tex-Mex meal sounds wonderful... I want to play around with spring rolls some more because I like the idea of them but just never think about making them! Yours sound delicious, and the mango with the salsa--yum!

Okay, I'm going to stop going on about it now. Can you tell I'm hungry?