I have a few standby dishes I make in bulk for quick and healthy meals throughout the week. One is chickpea and veggie stew, seasoned with cumin, coriander, garlic, and red pepper. I'm still able to get some nice fresh green beans from my neighborhood grocer, so I've been enjoying those as well. 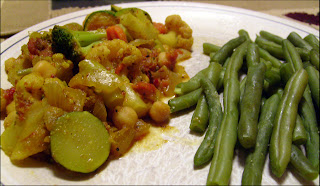 I've been trying to stay with meals consisting of beans and two veggies, one of which is broccoli. On this night I sauteed fresh spinach and mushrooms. A lot of meals looked like this: 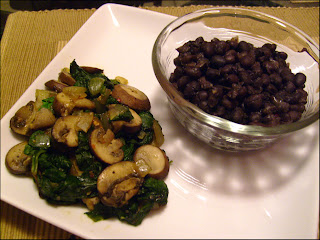 I added some shredded and chopped fresh zucchini to the spinach and mushrooms for leftovers.

My absolute favorite new creation was a variation on a recipe I saw for beans, rice, and cabbage, which I had never had and sounded interesting. I used my homemade pinto beans, substituted quinoa for rice, and used my favorite Mann's broccoli slaw instead of cabbage. I'm not sure why, but it was incredibly good. 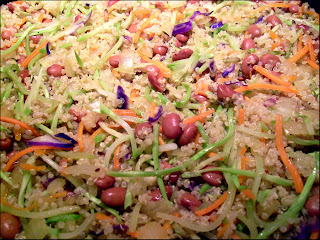 Another night I made some quick red lentils and a saute of fresh and frozen veggies. 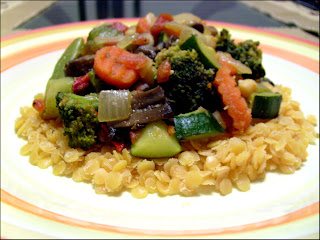 One recipe I have been dying to try is Susan V's Barbecue Tofu and Veggies. The night I decided I had to have it, it was already 7:00 pm and there was no time for using the crockpot. I had homemade barbecue sauce that was a week old and needed using, and I had all the other ingredients, so I made a stovetop version. 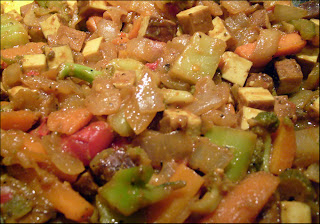 I took a taste test of the tofu while it was simmering, and to my extreme dismay, the tofu was bad - nasty, awful, inedible. I was NOT wasting this effort, so I picked out what I figure was at least 80 cubes of tofu. 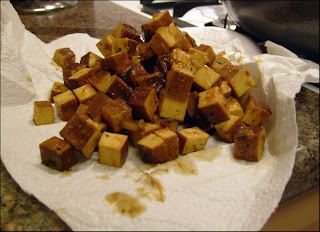 The rest of the veggies tasted fine, so I added in some greens, and ate it without tofu, over some leftover quinoa. A couple of nights later, I added in some GOOD tofu. I still want to make the crockpot version soon. 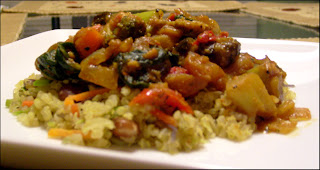 Sometimes I add almonds and cranberries to my broccoli. 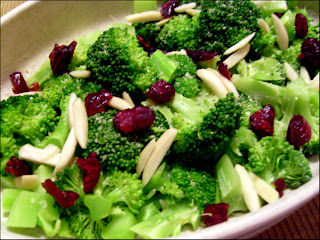 Here's some braised red cabbage and onions. The cabbage is 49 cents a pound right now and I love it. 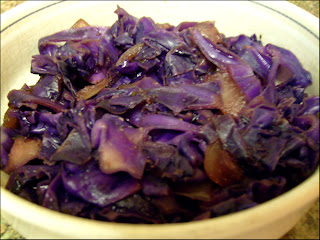 On an evening I needed something sweet, I cored an apple and stuffed it with mashed banana, almonds, and a chopped date. A little cinnamon on top and four minutes in the microwave - very nice. 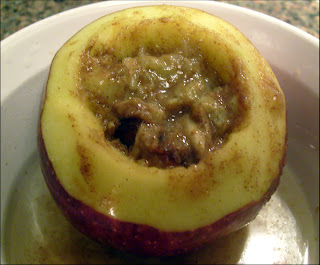 Lastly, some potato bread I baked and gave to Chase. 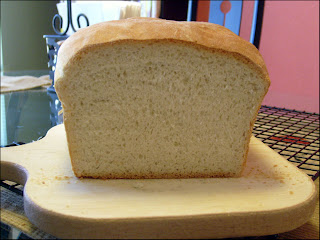 I've been enjoying everyone's "Behind the Apron" posts. It's been a busy week, but I'll find time to visit all my fave blogs soon.
Posted by aTxVegn at 8:18 PM

Very nice!!!!! So many veggies and such quick meals. Yummy all that broccoli. I'm very impressed and will be copying several of them, I love red cabbage, too, and so cheap!

Stuffing an apple with banana is the greatest idea I've heard in a while. I will definitely try that.

Mm, your broccoli looks so good. Because of the freeze in Cali, produce prices here in Ontario are through the roof, and I have been without broccoli for a few weeks now.

And I am just like you - I would have picked out the tofu too! Some would just throw out the whole lot, but not me - I cannot stand wasting food!

Never thought of adding cranberries to broccoli but thinking about it the combination is probably great.

This just confirms it- you and I have really similar tastes in food. Beans + two veggies = perfection for Bazu. That bread also looks perfect! Sorry about the tofu disaster. =(

In response to what you said on my blog, yes I am glad to be out of Oklahoma! It's refreshing to be in a place where most people at least know the word "vegan."

I've been meaning to ask you a broccoli question: what do you usually do with the stalks? Do you usually chop them up and steam them with the tops? This may seem like a dumb question, especially from one vegan to another, but I always imagine that the stalks would be really tough and so I end up not eating them. Help!

All your creations look delicious. I've been craving a lot of bean and vegetable dishes lately, too. Yum!

I seem to be short on inventive comments these days, but that baked (nuked)apple sound rilly rilly good (rilly misspelled on purpose).

Kati, the broccoli stalks are my favorite part. Just peel them with a paring knife and underneath is smooth sweet goodness. Yes, I just chop them up and steam them with the tops.

I love it--your meals look so healthy and lovely! I'm looking at your most recent comment--and I have to agree, the broccoli stalks are the best part of the broccoli.

I wish I was eating at your house this week. Really.

Isn't it funny how red lentils, once cooked, are not red at all?

Your broccoli with almonds and cranberries is awesome looking. I just love all the great food you have been cooking.

Everything looks so good. I have to admit that I eat way more broccoli since reading your posts than I used to. Potato bread is my favorite bread -- never have made it though. Yours looks perfect.

The chickpea and veggie stews looks divine. Yum! And the potato bread...I bet that was delicious! I love potato bread. Lucky Chase! :)

that apple is so cool!

Bonjour I'd like to thank you for such a great made forum!
Just thought this would be a perfect way to introduce myself!

Sincerely,
Johnie Maverick
if you're ever bored check out my site!
[url=http://www.partyopedia.com/articles/monkey-party-supplies.html]monkey Party Supplies[/url].