The weather teams had been telling us all week that Sunday was going to bring the coldest temperatures in a decade. Then Friday they changed their minds. I'm not complaining - it was sunny and 68 degrees! It just wasn't soup weather anymore. But I already had on the menu "Vegetarian Goulash" from Nava's Vegetarian Soups cookbook. It's her take on Hungarian goulash, made with potatoes, carrots, green beans, and seitan. I used sweet potatoes instead of white. Then I didn't want to use carrots (orange again), so I used cauliflower, which actually turned orange. I hate frozen green beans and the fresh ones looked awful, so I used edamame. The goulash is seasoned only with vegetable broth, red wine, fresh parsley, and of course paprika. It is wonderful, a real meat and potatoes type stew. I got a huge pot full, probably because of the cauliflower. 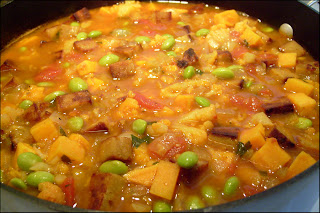 I had just made a pot of black beans, so I made a black bean, corn, and red pepper salad to go with the goulash. 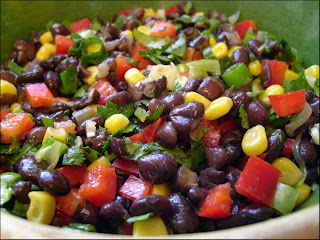 Although we didn't actually watch the Super Bowl, I felt the need to make chips and dip. I had a huge bag of corn tortillas in the freezer, so I made the chips from those. 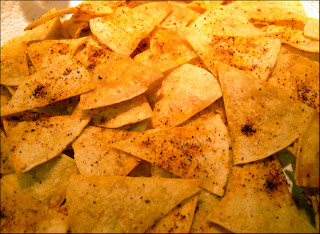 We like Alton Brown's guacamole. I made that to go with the chips. Why do I wait for sporting events to make chips and guacamole? 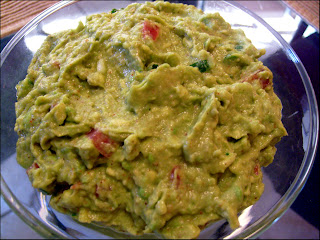 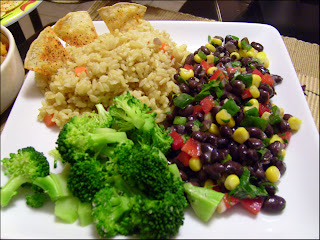 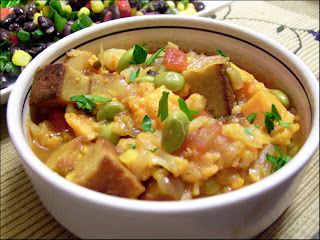 For treats, I made Schoolyard Oatmeal Cookies. I used sour cherries instead of cranberries, and also added in some chocolate chips. We loved these cookies. Sugar-free, not too sweet, and I like the recipe because it only makes a dozen cookies. 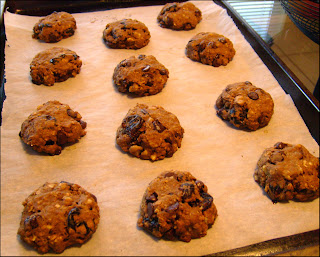 I also made Native Blend Popcorn Balls from the Vegan Lunch Box blog, which I've been dying to make. I used puffed corn instead of popcorn. (I guess I made "Puff"corn Balls....) and as much as I love these, I just had all kinds of trouble getting them together, probably because cornpuffs don't have all the nooks and crannies of popcorn. I had to keep putting the mixture in the microwave to remelt the sugar, then burn my hands trying to form the balls before the sugar hardened again. But they are really really delicious and I definitely recommend you give them a try - but using popcorn! 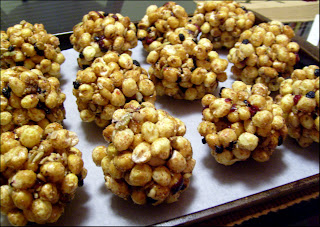 Oh, I had thought about having Southwest Sunshine burgers to have with our meal (I made rice instead) and then I was feeling bad about having store bought burgers and buns, so I made ketchup from Real Food Daily. I had to add a little more agave nectar because it didn't seem sweet enough, but otherwise it's an easy and tasty recipe. I forgot to send some home with Chase, so I now have 3-1/2 cups of ketchup that will only keep for 5 days. Hopefully Chase will come have a burger with me later this week. 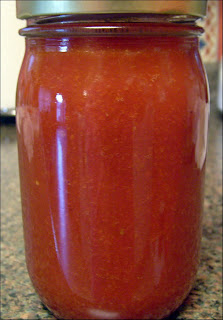 Now I get to enjoy some Sunday night leftovers and a couple more days of 70 degree weather.
Posted by aTxVegn at 7:00 PM

Yum Diann! Looks great. I love homemade chips and guacamole. Could you maybe portion the ketchup into small ziplock baggies and freeze it or what about getting super creative and making a spaghetti sauce or something like that? It always saddens me when I have to waste food.

How do the puffcorn balls taste? Maybe they're better than popcorn.

Could you freeze the ketchup? I freeze everything, so almost nothing goes to waste (other than the stuff I find in the freezer months after I put it in there, all freezer burnt and frosty!)

Love Chase's plate -- one of my favorite Mexican places in Indiana always sticks chips in their rice and it somehow makes the rice taste better.

Thanks for the link to the cookies. I'm trying to eliminate some of the processed sugar I take in but I still like to have a little treat.

The goulash looks like my type of meal. I guess I'm still a meat and potatoes girl at heart, and I love hearty stews. We didn't watch the superbowl, either, but I was totally craving chips and dip! I'm glad I wasn't alone on that one. The puffcorn balls look really fun! As for the ketchup, I went to the actual RFD restaurant when I was in LA last year and it was fabulous. I've been wanting the cookbook ever since.

Oh yeah, and thanks for the broccoli tip! :)

Crystal, pasta is an excellent idea, and so is making my own little ketchup packets - thanks!

Judy, the puffcorn balls are really good, and don't have those things that stick in your teeth.

MV, the cookies are VERY good. I miss them already.

Kati, I am definitely not going to waste that ketchup! I love everything I've made from the RFD cookbook.

Yum! I agree that homemade ketchup is so good, and better for you than anything store-bought. Hopefully you and Chase will make a good dent in it!

Did you know that superbowl sunday is the day that the most avocados are consumed in the U.S.?? Everyone thinks to make chips and guacamole that day, just like you (and me)! Then again, I average at least 2-3 avocados a week, so you can call me addicted...

And yes, I am jealous of your 70 degree weather!

The black bean and corn salad is so pretty!

70 degree weather... you can't store leftovers in that kind of heat! Why don't you bring a few over to my front porch and then you won't have to worry about them. :) I promise I'll eat them before they freeze .... -18 degree F here :) All the food looks good. A two vegetable a meal goal, good idea.

That black bean salad looks just perfect--I love that kind of thing. Really, I love anything with black beans in it. The Puffcorn Balls look good. I've actually been eyeing that recipe too recently, so I'll give it a try soon (with popcorn)!

Where to start? Everything looks wonderful. I am going to have to get RFD from the library and make some ketchup. It is so expensive in the store to buy good organic ketchup. I need to make that goulash too and the cookies. Oh my oh me!

PS. I made guacamole on Superbowl Sunday too! I have to get that posted. hehehe

We had incredible weather this weekend too. So nice to be out and just breathe in the air and see the sun. Heavenly.

Wow, that goulash is so different looking than the kind I grew up on! Everything looks great, though, and I love that you made super bowl food, even though you didn't watch it! We didn't either, we're not professional sports fans.

Delicious as always. You let me know if you ever need a roommate, okay? Or 2 roommates and 3 cats, lol.

Chase's food looks excellent! Can I just say I love the straight-sided bowls and square plates? How cool!

mmmm!
What a fun post!! I especially love your delicious looking bean salad. I love salads like that, and I should make them more often.

Also, I'm super glad to see the popcorn balls. I have been eyeing that recipe ever since Jenniferschmoo first posted it on her blog so long ago. I'm sure I'll get around to it one of these days!

Fun that we were both cooking from the RFD book this week!
:)

it all looks so tasty! I must admit my sweet tooth betrayed me once more, I want one of them balls!!!

It's in the '70's here in L.A., but that won't stop me from making your goulash. Comfort food that good is perfect in any weather!

I haven't seen puffed corn in forever! My mom used to get that cereal when I was a kid!

I'll bet you could freeze the ketchup if you need to..

It probably wasn't that you didn't use enough agave, it's probably that you used the wrong kind. Apparently there are different kinds and some are watered down. I use Volcanic Nectar because it is so much better and stronger than others I have tried. I get it online here: http://www.VolcanicNectar.com