It was great spending time this past week with my sister and nephews, and parents and brother. I only got to take one day off from work for all day shopping and dinner, but I also spent several evenings with them, and then on Saturday we had a big family feast at my parents house. They were grilling chicken and also made baked potatoes, broccoli, and fruit salad. I brought “chicken” for Chase to eat, and treats. 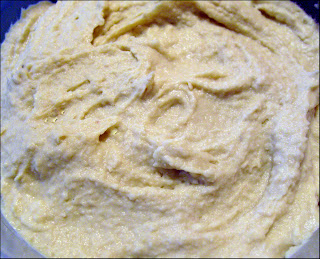 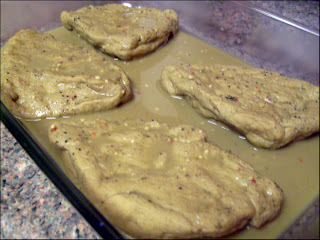 …. which became Seitan and Veggies with Marsala Sauce. 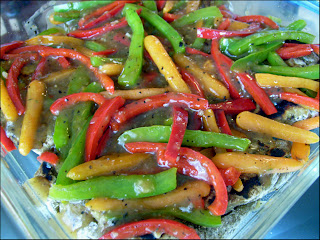 I had a taste and it was fantastic. My sister, who had never heard of seitan, asked to try it and thought it was really good, although she kept eating real chicken.

I saw a post somewhere that showed how to slice a pepper, so I thought I would show my unique, and I guess wrong/weird way of slicing. 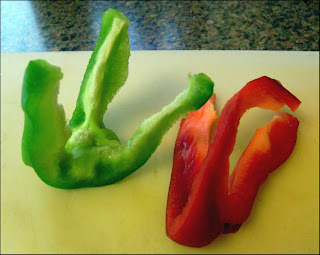 For sweets I took Peanut Butter Oatmeal Cookies with Cranberries and Raisins which I found on Roxy’s blog. 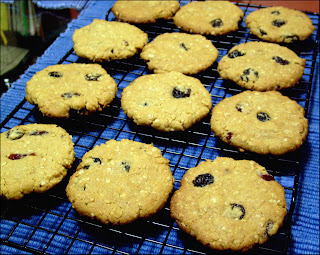 Everyone liked them, but I wish I had added a teaspoon of vanilla, which I meant to do but forgot.

And I also made Fudgy Brownies from Vive. I think they needed another minute or two of baking. The outside was really good, but the inside tasted raw to me. 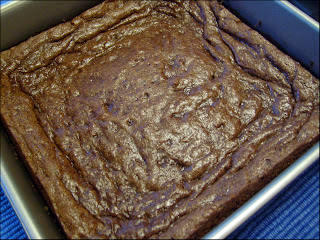 Tomorrow I have to say farewell to my trainer I’ve had for three years. I knew this day was coming, but I’m going to miss him so much. I’ve been taking him treats I bake on Sundays, but today I baked a batch of cookies all for him, Coconut Lime Cookies from Vive. I suppose you’ve all made these already, but if not, they are delicately flavored and have a wonderful texture. 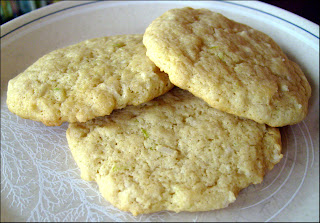 It’s weird spending this Sunday all alone. I’m used to having so much family around! Now I'll have a chance to catch up on all my fave blogs.
Posted by aTxVegn at 5:40 PM

I'm glad you had a great time with your family! Ever since I was little, I always hated the day that visitors left- it feels so empty- but that feeling passes soon. I'm also sorry about your trainer leaving- I can imagine what a great relationship you can have with a really good trainer. I have tried the coconut lime cookies, and love them. My little cousin loves them too and requests that I make them for her when I visit! That pan of brownies looks really good to me right now... I also often have brownie baking timing issue.

Oh! Being from Texas, you have to be careful that your bellpeppers don't look too much like the letter "W"... I'm just sayin'! ;-)

Sounds like you had a great time with your family. Your food looks wonderful as usual. The seitan looks delish! I have not tried the Coconut lime cookies, but your post means I will be soon.

I love your method of slicing peppers! I do it the way I learned at a restuarant I worked at, which involves banging on the pepper with your hand to knock the seeds out. I always take secret plasure from whacking the pepper - hopefully I'll be able to eat them again someday :(

Those cookies look so delicate and crispy! I want one!

Love your pepper picture.. the seitan dish looks amazing and delicious.. as does the rest of your food.

I agree about the coconut lime cookies.. they are really good.

I am still so happy that you posted about the mashed limas.. we've made them again and my son LOVES them too. He didn't believe me when I told him they weren't potatoes.

I cut my peppers like Erica but yours are cute!

all looks delicious, but you should really think about making the hummus yourself. It's much healthier.

shooky, Vive is a cookbook. I absolutely made the hummus myself.

Those peppers are so colorful. I have always loved the look of those 3 peppers together. You do cut them a little funny! I could totally go for those brownies right now. Good thing I just ran out of cocoa powder!

Don't ya just love those coconut lime cookies? The brownies look so chocolately. Mmmm! Chocolate!
How do you do up the Seitan and Veggies with Marsala Sauce? It sounds very tasty.

That's really great that your sister tried seitan, even if she did keep eating meat. It's a step :)

All your food looks fantastic, as always. The only desserts I've made from Vive are the Delish Date Squares, which are wonderful. I don't really trust myself around sweets, so I don't buy or make them.

I'm glad you had a good visit with your sister and nephews. I've been wanting to try that brownie recipe but I find that most vegan brownie recipes taste too fudgey (i.e., raw) for me. Do you think cooking it longer would make it more brownie like?

Glad to hear you had a nice visit with your family. I bet that Seitan Chicken was super tasty. It looks terrific.

You can learn so much about a person from the way they cut their peppers...not really, but maybe...now you made me think about how I cut mine!

Hi, Carrie. For the seitan marsala, I sauteed the veggies with garlic, salt, and pepper, then removed from the pan; sauteed the seitan coated in a little seasoned flour and removed; then mixed together 3/4 c. marsala and 1/4 c. veg broth, and italian seasonings with a t. cornstarch and cooked that in the pan. Then plate seitan, veggies, and sauce on top!

Judy, when I make treats I have one, then make my guests take them home cuz I would eat them every day.

MV, the recipe said to bake the brownies for 22-23 minutes. I baked 22 and think just 2 minutes more and they would be perfect.

Oooh, everything looks SO good. Way to bring in the veg food to an otherwise mostly non-veg foodfest there at your parents' place, Diann. Love that!

The hummus looks divine - i can see why it was a huge hit!! And of course does that seitan chicken ever look FANTASTIC, especially when you made it so much, much more!!! YUMMY! The colours of the peppers are really amazing in there and you gotta love that yer sis thought it was "the real thing." THAT is doin' it RIGHT. Nice going.

Your cookies - both of the kinds you created - look lovely and those brownies, even if undercooked, still look phenomenal from the top view there. My sweet tooth is calling you, Diann...

Sorry about your having to say bye to your trainer, but bet you've had a great learning experience for the three years you've been with him. Lucky you!!

Hi!
Hope you're adjusting to your quietness after the family departure. That's a lonely sort of feeling sometimes, isn't it?

The food all looks wonderful. I've got a few LDV Chicken Seitan patties to cook up sometime soon. Maybe I'll copy your idea.

Also, I love love love those Coconut Lime cookies. So tasty! Sorry to hear that your trainer is moving on - it's hard to find those relationships that work right, isn't it?

Well, you certainly *do* cut up peppers in a unique way, don't you? :)

Sorry to hear about your trainer - take care!

Oh, all your food looks so yummy! I think I'm going to have to get Vive one of these days...all the recipes people make look so good - I end up feeling left out! Hopefully your house won't feel so empty soon. Your pepper cutting really is funny. I wasn't aware that there was a "proper" way to do it - I always do what feels most natural, and it looks like you do, too. =)

Those peppers look great…they are so colourful! I’ve never seen anyone slice peppers like that before… I think you are definitely unique! I’ve made the brownies from Vive! three times and they came out great twice and once they seemed undercooked like yours even though I think I baked them for the same time. I guess you need to test them with a toothpick or something. Anyway, I am sure they were still delicious!

im glad everything went well with the family. the food really looks great, love the colors!