My first homemade Indian dinner was difficult for me to plan. I didn’t want to make the usual Chickpea Curry, but rather something with lots of veggies and a great blend of spices. With all my new cookbooks I had an overwhelming amount of choices and became confused by so many regional variations of recipes. But finally I was inspired by a recipe I already had on hand from a local chef, “Vegetable Pulao,” and by “Indian Spiced Cauliflower” from More Soy of Cooking. I first began with a visit to the Gandhi Bazar. 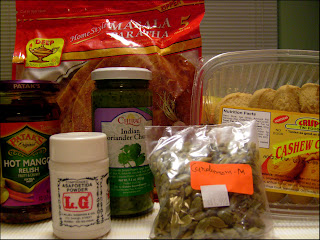 I bought relishes (which were too oily), coriander chutney (amazingly wonderful), spices, frozen Parathi, and Crispy Cashew Cookies, just in case my cupcakes didn’t work out. (I wanted a cookie soooo bad, and fortunately, they were so crispy they actually crumbled – so I could have one!) Gandhi Bazar was a fabulous grocery store. I have never seen so many dals – dry, split, roasted – and so many spices in all my life. I saw Pillsbury brand Naan and Roti in the freezer! There was rose water and mustard oil in huge bottles, and pastes and curry flavors I never knew existed. And the prices seemed very reasonable. I paid $14 for my things. The green chutney was the most expensive at $2.99 (and the best purchase). I was thrilled to find the green cardamom pods and the asafoetida. I looked up asafoetida on Wikipedia and found that it is also called Devil’s Dung and Stinking Gum, and has a sulfurous odor. I guess that’s an accurate assessment. I can’t really describe how it smells in the bottle, although “dung” didn’t come to mind. I just used a half teaspoon in the cauliflower dish, and it definitely adds an Indian flavor.

The Vegetable Pulao is made with texmati rice, carrots, onions, green peas (frozen), and chickpeas, and is seasoned with bay leaves, green cardamom pods, whole cloves, cumin seeds, stick cinnamon, and a pinch of saffron (tumeric for tonight). It’s garnished with cashews and golden raisins fried in a bit of margarine. The cardamom and the garnish put it over the top. It is incredibly fragrant and totally delicious. 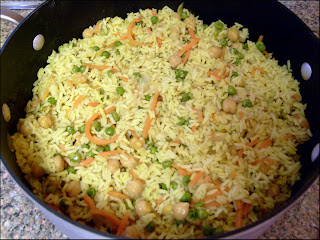 I’m sure it would look prettier with chunkier veggies, but I can only eat tiny pieces in one spot in my mouth without too much pain.

For the Spiced Cauliflower, I changed the ingredients a bit and added the asafoetida, but otherwise followed the recipe. I liked the cumin and cilantro in it, but I actually thought it was pretty bland. I also used more tofu instead of mushrooms (didn’t seem Indian, but maybe would have soaked up more flavor) and added fresh spinach, and I also added a fried onion garnish. The fried onions and a dip in the green chutney helped to make this a quite tasty dish in the end. It took awhile to prepare, and since it wasn’t very flavorful on its own, I don’t know if I’ll make it again. It needs a little work. 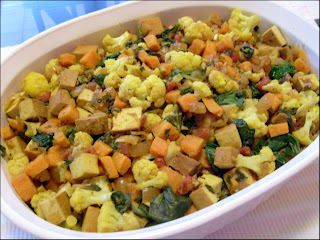 I guess it's one of those dishes that looks better than it tastes.

We pan fried the frozen parathi and also served the various store bought relishes and chutneys. Here's our table.

Chase liked the Pulao so much, you get another look at it. 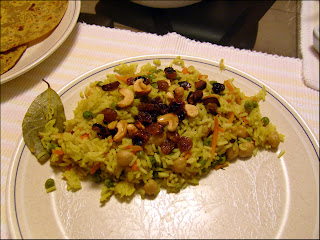 And here are the all the condiments. See how oily the relish is? 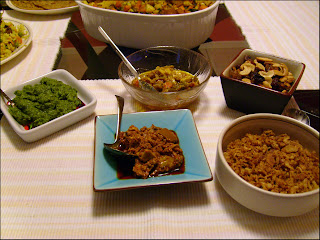 Mango seemed to be the proper ingredient for a sweet treat. I used the "Pineapple Right Side Up Cupcakes" recipe from VCTOTW and instead of pineapple, pureed some fresh mango and changed up the spices a bit. These cupcakes are small, only half-filled liners. I made the basic vanilla buttercream frosting and added in toasted coconut for the topper. The mango flavor wasn’t really there, but the little cakes, as always, turned out perfectly, and the coconut topping was a great complement. 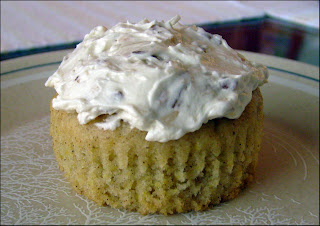 This dinner was fun to make. The Pulao was outstanding and didn’t take long to prepare – or eat! I could have left Gandhi Bazar and gone next door to Curry in a Hurry, and I may do that one day. But this meal was definitely delicious Indian fare and definitely vegan!

In other news…….. I forgot to mention on my Wednesday post about a longtime veg restaurant that caught fire. Mother’s Café and Garden opened here in 1980 and has been loved since that time. Ruthie ate there, at my recommendation, when she was in Austin for a visit during Christmas. Early Wednesday morning a homeless man stopped on Mother’s outdoor patio, built a fire, and fell asleep. A cook arrived at 5:00 a.m. to prep breakfast, and shortly thereafter a passerby noticed flames on the patio. A fire department is just blocks away, but the deck and all the beautiful trees were destroyed, and the restaurant suffered heavy smoke damage. Estimated repair cost – half a million dollars. The poor homeless man said he was just trying to keep warm and didn’t mean to fall asleep with a fire going. He received a warning citation for trespassing. So sad.

In still other news…… I went back to the periodontist on Friday to get my stitches out, but didn’t. I am healing nicely, but hardly any stitches have dissolved and there is one particularly painful knot I wish would go away. They wouldn’t take out any stitches, so I had to get more pain pills, the low dose kind, so I can function. I’m still eating mostly mush. I made more kale soup – it’s so good. I’ve missed my daily salads so much! So I’ve started wilting my greens and letting them cool, then adding dressing – voila!

Have a great week!
Posted by aTxVegn at 9:01 PM

Glad you're healing up there. I know it's a long, slow process. Your patience is inspiring... More soup for you!!

I was saddened about the news about Mother's Café and Garden. That's such a disappointment! And about the homeless man, doubly tragic. Glad he didn't get smoke inhalation or worse...

Your food looks excellent. I love the top dish, the veg pulao... that looks excellent! Don't you just love saffron (or better-priced tumeric)?! The colour!!! So nice.

And mmmmmmm... cupcakes! Nice. I love the coconut topping.

Keep bein' good to yourself!

Reading about your quest to cook an Indian dinner was so fascinating--and the results are beautiful! I would love to visit this Gandhi Bazar you talked about...

Oh, so sad about the veg restaurant. That's just a sad situation all around.

Hang in there and you'll be eating solids in no time!

The Veggie Pulao (minus the peas of course for me LOL) looks so tasty. Your dinner table looks loaded with yummy foods. Your mango cupcakes sound delish, especially with coconut on top.

That's such a shame about what happened to Mother's Cafe. I'm glad your healing well and I hope that pesky knot goes away ASA

Whoops, my comment above should have ended in ASAP!

Wow, what a feast! You're amazing to plan and execute such a meal while in the middle of physical yuckiness :)

Oh your dishes look great. I think I will have to try and make Vegetable Pulao or find the book at the library. Glad you are feeling better. I feel like such a baby cuz I have a tiny (according to the dentist) cavity and they are going to fix it next week. I am scared to death. It has been 16 years since a dentist had to do anything but clean my teeth. Sorry, I am so sorry for complaining.

sorry you didn't get your stitches out and that you are still experiencing some pain.

That is so sad about Mother's Cafe- sad for the restaurant, the homeless man, the neighbors, the customers, all around. At least it will eventually be back up and running!

I am so fascinated by your Indian feast- that looks like such a wonderful dinner! You have reminded me that I don't cook Indian nearly as often as I should- like you, I think I'm overwhelmed by sheer choices and variations.

Oh, I could go for some mango right now!

I'm sorry about your stitches- you must be so ready to say adios to those damn things already! Hang in there!

I love love love Indian food but, sadly, have not been very successful making it at home. Your meal looks really good. I checked out the link and the prices for the curry are really cheap. I'm jealous (lol)!

what a feast. you made me want to go to Toronto's Little India and start shopping!

MMMmmm... it all looks so colorful and GOOD! Don't you LOVE Indian markets though? I shop at one every now and then, it's always interesting and colorful.

what a spread! those cupcakes look so wonderfully flaky!

I am glad to hear you are a bit on the mend..
I would so LOVE to go to an Indian market! I have many Indian cookbooks but, I haven't really got to use them because I am always missing some ingredient.
Take care of your self - you'll be eating unwilted salads in no time.
Julee

I've really grown to love Indian food over the past year or so (assuming it's not too spicy). When I was in yoga teacher training, we had the privilege of having an entire weekend devoted to Ayurvedic cooking, as one of our three instructors was an Ayurvedic doctor (originally from India). We got to learn about all the spices and, of course, sample lots of delicious food - it was really fascinating!

I hope they're able to take your stitches out soon. At least you're still able to eat yummy food, despite your condition.

Thanks for reminding me that I need to cook Indian food more often!

what a great looking indian meal. I stink my apartment building up regularly with indian cooking.

also i love your creative way of having a "salad" by wilting the greens and letting them cool..very smart!

Mmmm… I love Indian food. Yours all looks delicious! I don’t tend to make it often as the smell tends to linger for too long and it never tastes quite as good as from a restaurant.

Glad to hear that you are healing up even if it’s a bit slower than you’d like.

Mango cupcakes sounds amazing, but I would be too tempted to just eat the mango straight. I love indian food, but don't live near any indian restaurants. Hopefully a higher power is working on that one!

Ouch! I hope your mouth feels better soon.
Your dishes look spectacular! I'm just starting to explore Indian cuisine (I know what you mean about regional variations! I still haven't got it down right) and have discovered some dishes that are really tasty. But like you, I find some things really oily. I think you did a bang up job!

Hey, I just saw that you linked me. Thanks sexy mama!

Glad that you are feeling better and healing nicely!

That indian feast looks amazing. I love indian food and the smell of indian spices.

A sad story about the homeless man & the fire at the resturant. Thank goodness that at least no one was physically hurt.

Hope you are off the mush soon, though in your last post, I see that your mush still looked pretty good!

When I think of it most of my curries are either cauliflower or potato based. They both tend to lean towards curry especially cauliflower since I had to give it up covered with cheese sauce when I became Vegan.

Hi Diann, I'm reading your blog backwards, so ignore my previous question about Mother's. I figured it all out from this post. :-)

I hope your mouth is feeling better--dental pain is just THE WORST!