I love this time of year when school is out and so much is going on in town. Friday after work I picked up some delicious falafel wraps made fresh while I shopped in the adjoining market….. 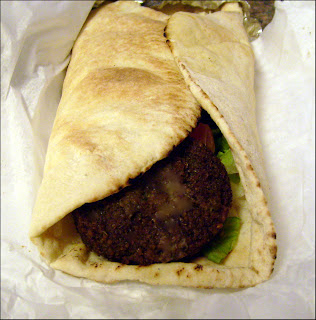 … then met Chase and Liz at an art show. The artists are mostly kids attending an alternative school and the bidders help raise money for the school. Liz offered lots of her works. Chase had a couple of pieces to show AND was the DJ. (Are you a “D”-J if you play music off your computer?) 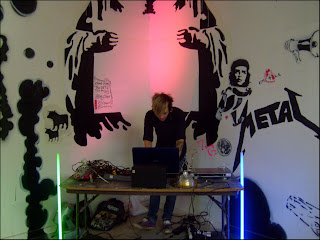 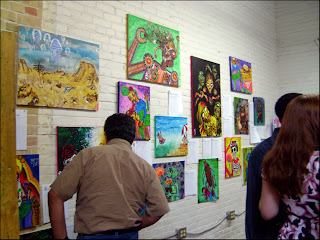 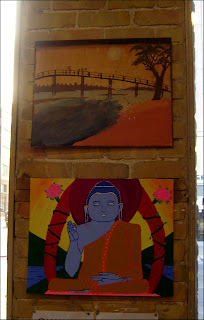 Some others I liked. 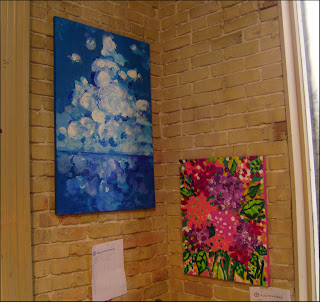 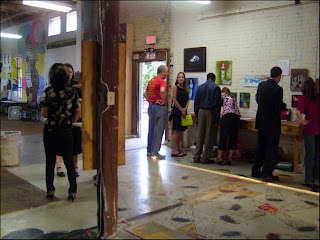 Saturday night was our first Austin Veg Network potluck dinner. Members offer their homes to host monthly dinners. Since Chase was working, I made his dish also. I made a blackbean salad, which was a huge hit. With the beans it had corn, tomatoes, red and yellow peppers, green onions, avocado, and cilantro, and a simple dressing of olive oil, lime juice, garlic, crushed red pepper, S&P. 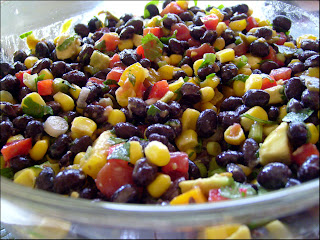 I also made VWAV peach cobbler, but I used fresh apricots and blackberries instead of peaches. Not the prettiest dessert, but the blackberries gave it a nice pink tinge. It was also well received, but there was a chocolate pie too, so…. 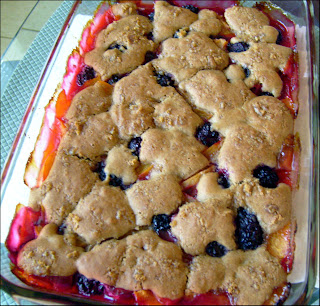 One of the members told me when the dinners first started, people just brought a bag of chips. Now it’s really evolved into great homemade dishes. That’s what I’m all about! The hosts made awesome tempeh enchiladas. 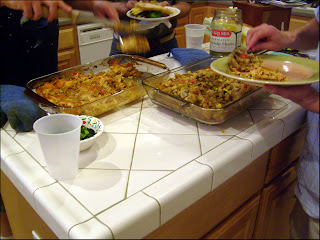 Next to the enchiladas is some stuffing someone brought, which I thought was odd. Oh, well. There was also chips and homemade salsa, tabouli, peanut noodle salad, artichoke hearts, apricot bread and hummus, tofu from Whole Foods, a broccoli and walnut salad which was interesting, and cream of wheat with veggies, which I’ve heard is really good, but neither Chase or I tried it. 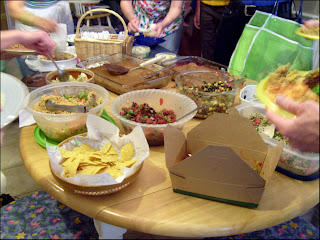 The desserts with my cobbler were an applesauce cake and the chocolate pie. The cake was really moist and the pie was fantastic. 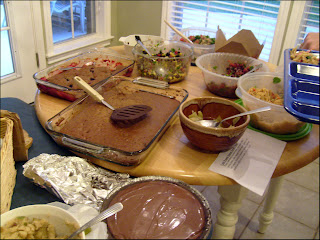 After dinner is usually a speaker or movie, but I had to get Chase back to work so I missed out on that. This was a fun dinner with interesting people. 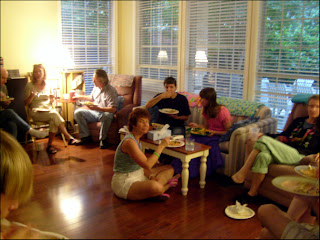 Now I have to start on Sunday dinner and catch up on your blogs. My sister and brother-in-law come to town Tuesday and stay through Memorial Day – yay!
Posted by aTxVegn at 9:24 AM

Okay, I totally want to make that cobbler right now!

Great art. What a wonderful idea are your monthly get togethers. Hopefully one day we will have enough people interested here to do the same.

Your black bean salad sounds great. No wonder everyone raved about it.

How'd I miss this one? I want to go to a vegan potluck so badly - sharing good food with like minded people is the best. Your additions look colorful and delicious as usual. Art show looks fun, too!

How cool is this? Art and vegan food in large quantities = Bazu's idea of heaven. Thank you for taking us along... now if only I could taste-test your culinary creations through the computer screen...

Yay for falafel sandwiches! They're one of my favorite thing. What a cool art show. Loved the pieces submitted by Chase and Liz...what a talented couple :) That rocks there is a veg potluck in your area too.

Awesome art! Was that your son's work with the buddah & bridge? Incredible. and the food, too.