Diann made breakfast? Yes, but served it for dinner. I know you guys do breakfasts all the time so most of this post will be old news to you, but I did come up with a few new twists.

This dinner was Chase’s idea after I made him Breakfast Pie earlier this week. I made a shredded potato and onion crust. 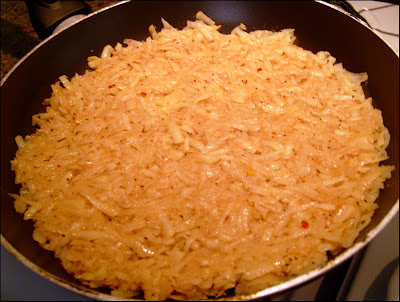 I prebaked the crust to get the potatoes as crispy as possible, then filled it with spicy sausage crumbles and cream cheez, and topped it with a sliced tomato. 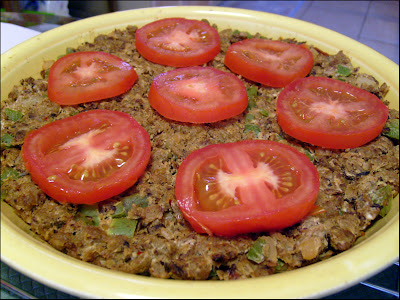 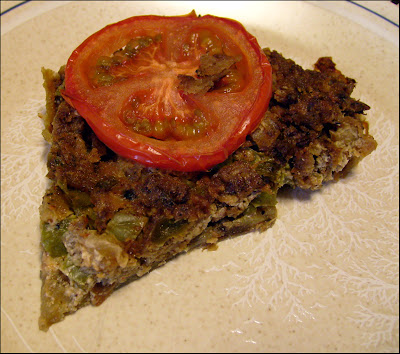 Chase really loved it, and then asked me to do a whole breakfast for dinner – tofu scramble, potatoes, biscuits and gravy. My issue with breakfast, besides generally not being a fan, is that the food is not pretty (see above pie!). Sure muffins and pancakes are pretty, but scrambles and hash, not so much. And it’s really difficult to get everything to come out hot. So my plan was to make as much as possible ahead of time that could be easily reheated.

Migas Casserole turned out so good! Migas are the favorite scramble around these parts. Texmex style migas must include onions, tortilla strips, and peppers. For my casserole, I used LDV’s BLT Brunch Casserole as a go by. I made the cheez sauce from that recipe. I made my migas by scrambling extra firm tofu, onions, tortillas strips, and medium hot salsa. To make the casserole, first I layered tortillas in the bottom of oiled dish. 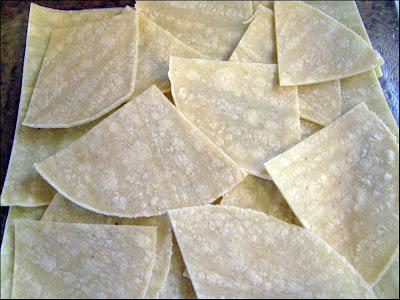 I topped with half the cheez sauce. 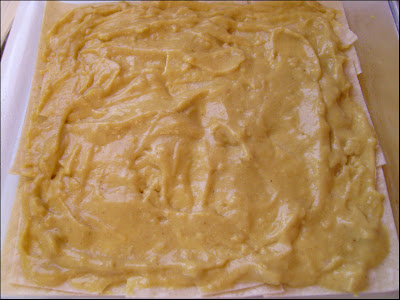 Added all the migas, then some chopped fresh tomato. 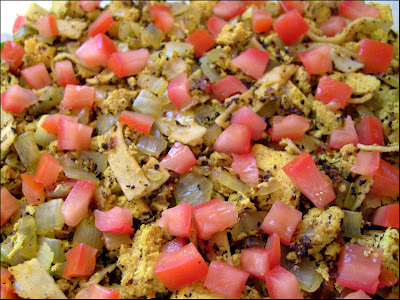 Then added the rest of the cheez sauce and finished with chopped green onions. 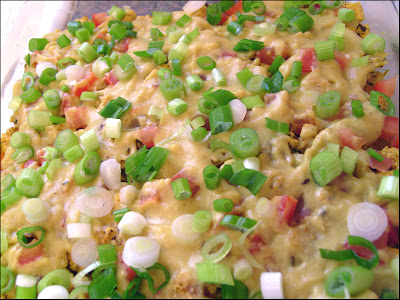 This is really already cooked so it just needs to be heated in the oven before serving. The cheez sauce was mildly flavored and perfect to hold the casserole together – very yummy.

The chickpea gravy was great over LDV’s giant biscuits, which I opted to bake in muffin tins. 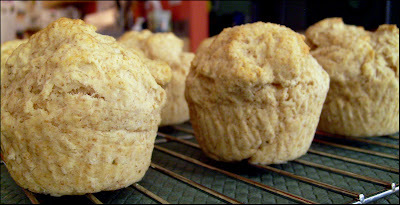 Chase and I made the bacon and the hash while the biscuits baked and the casserole heated. The bacon was okay. The Chicago Diner Hash was outstanding. It’s made with chopped baked potatoes, onions, and green peppers. We left the skins on the potatoes. Not a pretty picture, but really good stuff. 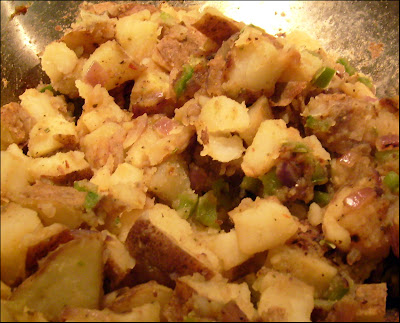 We heated up the gravy and beans, steamed some broccoli, and put everything on the table. 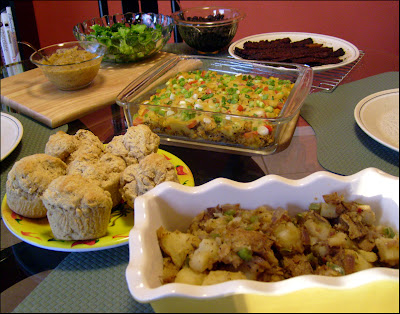 Chase’s plate – he was so happy. 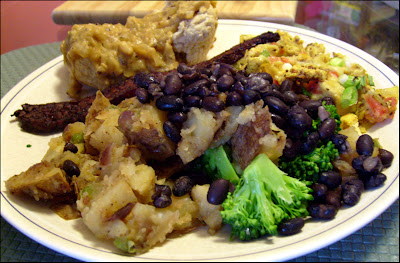 My plate. I had to partake of just a little soy and wheat. 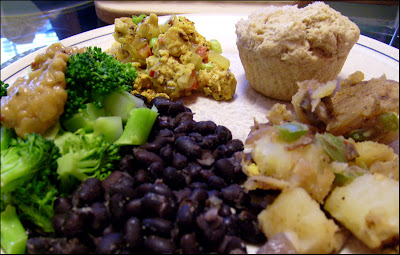 For dessert, waffles of course! I found a Belgian waffle maker in the top of my coat closet. Apparently I had used it before, but I can’t remember doing so. One thing I had to come up with was something besides pancake syrup to top the waffles with because Chase hates it. I figured I would have to do fruit and powdered sugar. I did make a fruit salad with what I had on hand – fresh mango, orange, apple, banana, and canned pineapple. 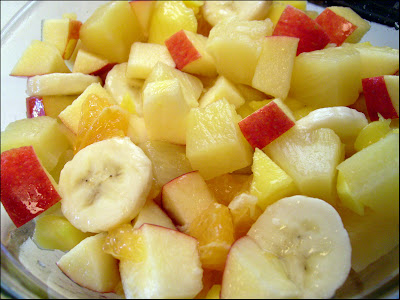 I thought about Isa’s banana waffles and adding peanut butter to the syrup, but then I ran across a recipe for apple cider sauce – 2 cups of apple cider reduced to 1 cup, a little cornstarch slurry, and a tablespoon of EB. Oh, wow, this is so delicious! I used the VWAV Ginger Pear Waffles recipe, substituting apple for the pear, and using lots of gingerbread spices to make Gingerbread Waffles with Cider Sauce and fresh fruit. 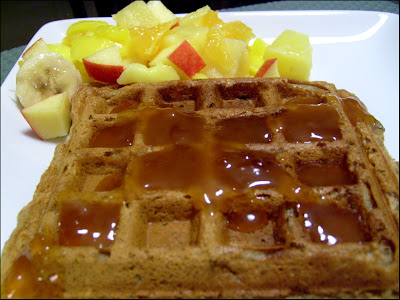 I think my waffles turned out right. They tasted fantastic and the leftovers Chase can pop in the toaster. Breakfast is not so bad after all!
Posted by aTxVegn at 10:50 AM

Oh wow, Diann! This all looks so delicious...as usual.

I made sourdough pancakes and those were a treat for the week to pop in the toaster oven. Waffles are even better!

oh my goodness, what a breakfast spread!! the breakfast pie, Migas Casserole, the biscuits, and the Chicago Diner hash look magnificent; but my favorite has to be the Gingerbread waffles with Cider Sauce - oh my goodness, YUM!!! :0D

The breakfast pie looks awesome. This is now on my to do list for sure!!!

lovely! truly spectacular Diann! I really can't wait to be in your neck of the woods someday!!
Your meals again, as usually look so flippen yummy!
Julee

spectacular is the word! wow. I never have the energy to have more than a Luna Bar in the morning. ;p

I read your blog and know how you feel about broccoli. When I saw this, I thought about you...

this breakfast post looks so good!, i wish i was at your house to eat some of them!

Fantastic breakfast dinner. I love everything. You are so inventive. The Migas Casserole is being put on my to make list for sure. Thank you for the great instructions. Last night Chuck wanted dessert and we didn't have anything to put together. I think waffles are a great idea!

I think I have died and gone to breakfast heaven. Haven't seen a vegan migas recipe before, that sounds so good!!! Thanks so much for posting!

Can I hug you ??
I was just sitting here in front of the computer and it's really time for me to shut the thing down and go make supper but I didn't feel like it. I didn't want to think about rice or quinoa or anything really UNTIL I came to visit your blog !
You have solved it for me : we are having breakfast for supper !
Thanks, and like it or not, here's that hug {{{{{{{Diann}}}}}}}}}

Uh, I'd be happy too if Chase's plate were my plate! Holy wow. That breakfast pie is blowing me away. How do you manage to put so much creative energy into everything you cook? {bows down}

I absolutely love breakfast, so "breakfast for dinner" sounds right up my alley! Your breakfast-dinner spread looks fabulous!

Thanks so much, everybody! I'll have to make breakfast more often!

Arine - Thanks for thinking of me. That was a GREAT video!

Oh my! Your breakfasts look so good! I mean, great!! I would eat that for dinner too. And lunch.

The Breakfast Pie is a great idea. I made a vegan sheppard's pie recently for dinner, but didn't really think of a breakfast version! I love the idea.

ooh, the waffles! Apple Ginger? :) The syrup substitute looks great! I cannot have too much maple syrup in the morning as it's too sugary and heavy. I like your version. And the fruit salad with it makes it perfect! Fresh mangoes on hand? Lucky you!!

WOW--amazing post. I want to try it all! Actually there's been a few beautiful and yummy posts since I last visited...I LOVE the look of the ravioli from the previous one. Mmmm...

Ooh, I love it--the migas casserole and the hash both look especially delicious, but those WAFFLES--I love anything gingerbread and anything cider! Too bad I'll never have time to make this in the morning... I'll just have to have it for dinner like you! :)

That breakfast pie has got to be my favorite. What a great idea!

We almost had breakfast for dinner last night. I LOVE that apple cider syrup idea, I have a bunch of cider in the fridge right now, I think I'll have to try it!

Once again, you've outdone yourself.

Yum-tacular! That breakfast spread is the best.

Wow! Your breakfast feast would definitely work for any meal in my home. Yum yum yum.

I love the breakfast pie idea. With such great food I can see why Chase is happy :)

dontcha love how easy those biscuts are? i remember the first time i made them and they came out of the muffin tins. 'genius!' i cried, as i'd never met a biscuit recipe til then i didn't kill with the kneading. hehe

as usual, your dinners are beautiful, balanced, and look delicious!

Mmmm everything looks so good! I love having breakfast for dinner.

me inspire you?! now, that is truly a compliment. I so enjoy your blog and it not only inspires me to make food, but healthy delicious food at that! ;)

oh wow.
I am behind on your blog.. and you've been doing some great cooking! I love love love breakfast for dinner! It's hilarious what you said about breakfast foods not being attractive. So true! Especially tofu scramble pictures always crack me up. I love all your creative ideas though... like making migas (which I've never even had!) and gingerbread waffles with apple cider sauce?? Very cool!

I have a lot of irish in my blood and that breakfast pie looks great- made similar things in the past but usually ended up with a pile of shredded fried hashbrowns topped with hot peppers, tomatoes and onions(with salsa)

As a vegan and soon to gluten free vegan I love your blog.