The editor of Texas Monthly magazine was interviewed recently on radio after a brief hail storm one morning. He commented that he drove through hail the “size of edamame.” Oh, boy, he caught a bunch of flack for that! Listeners thought it made Austin sound too frou frou. I thought it sounded very veggie and I love it!

Anyway… Earlier this week I made Raw Ratatouille from an e-recipe I got from Chef Jason at Vegan Culinary Experience. He actually calls it “Ratatouille Diablo,” but with only 1/8 teaspoon of cayenne, this Texas lady didn’t find it worthy of that name. However, it was super simple to make and yet another way for me to try to enjoy eggplant. I diced eggplant, onion, bell pepper, carrots, yellow squash, zucchini, tomatoes, and garlic, then put it in a big bowl and sprinkled the mixture with salt. I weighted it down and let it sit for a couple of hours to draw out moisture. 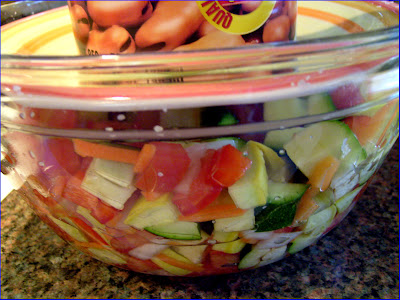 The next step was to drain the veggies, reserving the liquid to add back in after rinsing, but I wound up with LOTS of drainage! 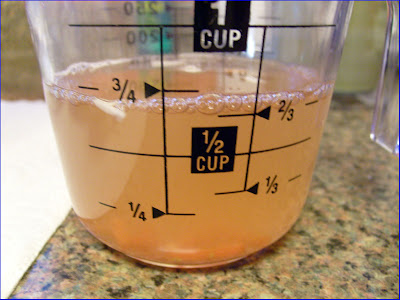 There was no way I was putting all that salty liquid back in. It would have become raw salty soup. So I just put back in a tablespoon, and then added the spices – thyme, fennel, fresh basil, paprika, and cayenne. The flavor was excellent and I have enjoyed eating this, even the eggplant. 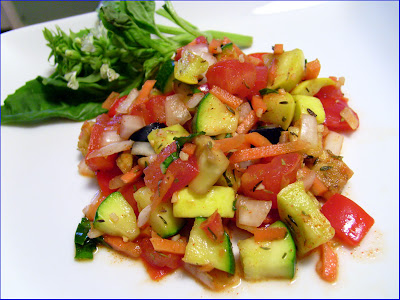 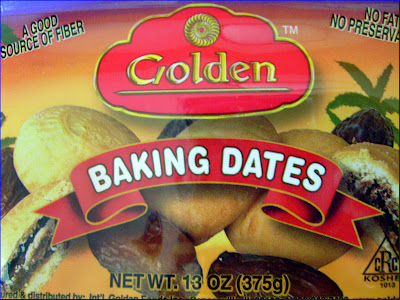 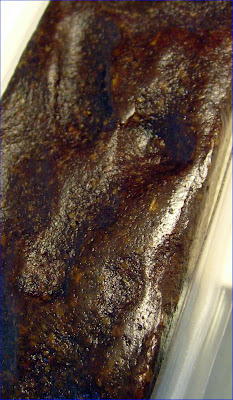 I thought this was a great find, like I wouldn’t have to goop up my food pro, and that may be true for certain recipes, but not for the raw treats I made. I chopped up raw cashews in the processor and poured them into a bowl. I then added in an equal amount of the dates, but just wasn’t able to stir it. So I ended up putting it in the food pro after all. I took out that mixture and added in my two favorite ingredients for raw treats – cacao nibs and goji berries. 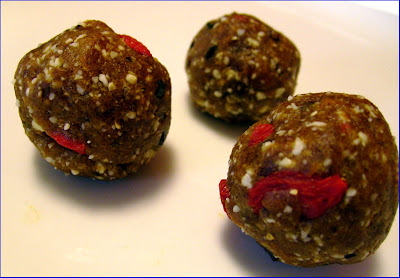 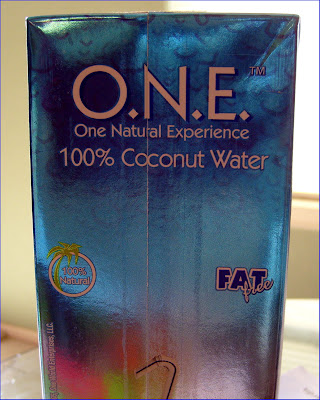 Pure coconut water in a tetrapak, the smoothest drink of water I’ve ever had. It’s supposed to be the best rehydrator for your body and also great for your skin. It’s actually only 60 calories for 11 ounces, and with all the beneficial nutrients I get from it, I’ll make an exception to my rule for this stuff!

Anonymous said...
This comment has been removed by a blog administrator.
9:09 PM

you KNOW I'm loving the raw goodies in your post today - everything looks FABULOUS!

baking dates??? wow, I REALLY need to find those!!

Edamame frou frou? No way. Now if he were to say it was hail the size of cacao nibs... well now that may be a stretch :)
I love your blog and also live in Austin, so I was wondering where you bought the baking dates and coconut water? I want to try them out.
Hope Chase is doing better!

Hi, Erika. Thanks for the nice comment, and Chase is finally feeling better. I got baking dates at Parmer/Mopac HEB in the asian section, and coconut water at the Gateway Whole Foods. WF was giving out samples and $1 off coupons!

I LOVE ONE COCONUT WATER!!

I keep seeing that coconut water, and have been thinking of purchasing it. Now I KNOW I'm going to.

We had edamame-sized hail here just last week! I love edamame... wish I coulda goe outside and eaten some out of the sky! Can you imagine-- free edamame!

Coconut water is, as I understand it, very close to human blood (in comparison to other natural food liquids). Wheatgrass juice is only one molecule different from Hemoglobin, they say if you drink coconut water and wheatgrass juice together it's like a blood transfusion :) Well, that's what David Wolfe says, anyway.

I like all these raw ideas - the cookie balls sound perfect with the classic fruit, nut, and chocolate trio and a RAW ratatouille dish? Awesome! I've never thought to drain the water out of vegetables, either!

wait a minute. I just noticed you're from austin!! My goodness I must have been distracted by your food to not have noticed. I'm seriously considering moving to Austin this summer (july) and going to The Natural Epicurean school there. I need to know everything about austin!! do tell and feel free to email me :)

You know, I wish I liked coconut water. It just doesn't taste good to me. I've tried it a couple times and I'm not happy with the flavor. I have the same "don't drink your calories" rule. With the exception of a glass of OJ every now and again, I stick with plain water.

That rattatouille (sp?) looks great! Good call on not adding the liquid back; it looks perfect the way it is. And thanks for the product reviews; I love that the coconut water is somehwhat lo-cal and I learned something too; I didn't realize it was such a good hydrator.

oooooh! coconut water...that sounds so good! and, i will be trying those broccoli burgers from your previous post. i hope you have fun making the soul burgers. whatever you do, don't use a food processor to mix the ingredients! yikes, i did that once and i ended up with a puree that didn't make for a fun burger at all!

p.s. you can add extra soul food seasoning, but the original recipe called for 2 tsp, and i use 3 tsp, and that's plenty spicy for me. so play with it and see what you like!

The rawtatouille looks great, very colorful! I love the reference to edamame, but how random... I don't think I've ever compared something to them for size!

I'm reading THRIVE by Brendan Brazier to help me with the nutrition I need while training for an iron man... anyway he recommends coconut water and nothing picks me up after a hard work out like that does!

ooh, I adore coconut water! I haven't had it in forever, but when it gets hot out it's like the only thing I want out of the drink cooler.

And raw ratatouille is such a neat idea!

Thanks so much for your blueberry muffin suggestion!

those food items look both gorgeous and delicious! I wanted to reach into the computer screen to try them ^^

re drinking calories: I wish I was as strong as you- I am a terrible alcoholic!

i'm happy you are making an exception to your drink rule for coconut water. it truly is one of the best rehydrators and it's delicous! i drank it all summer last year when it was hot as hell and i was very pregnant with Reno and about to pop.

Ooo colorful, pretty food! Eggplants and squash are pretty much the most awesomest vegetables in the entire word :D

And wow that coconut water sounds really amazing! I must try and find this the next time I hit the market!
I know what you mean about the drinking and the calories--I was so shocked when I first started reading labels and discovered that one cup of soymilk was 140 kcal X_x

Wait a minute... 1/8 tsp of cayenne? I'm with you on this one. Still, looks delicious. I should try eating raw more often.