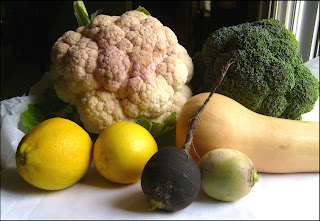 The cauliflower still has a purple hue to it. I think I posted about this earlier. The last cauliflower I bought was purple only on the inside, which was a nice surprise. I also got some Meyer lemons, broccoli, butternut squash, and some radishes - bear with me, I'm fascinated with these things - a black radish and a watermelon radish. The black radish is white inside and the watermelon radish is bright pink inside. 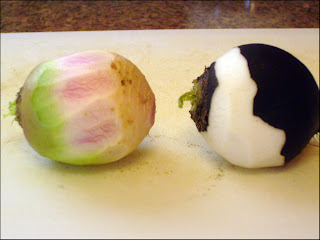 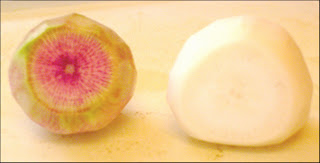 I think they are just beautiful. I made a radish salad with them from a recipe for Crispy Oriental Radishes posted by Jackie. I added a teaspoon of miso to take away some of the spiciness. I also made the Potato and Mushroom Miso Soup that Bryanna posted last week. I had never thought to put potatoes in miso soup. This soup was fabulously delicious! We almost ate too much to enjoy dinner (yeh, sure!). Here's a picture of a steamy bowl.

We made a stirfry to go with the soup. I took an idea from Susan V's recipe for Tofu and Broccoli with Pineapple Sauce. She called the recipe a work in progress, so I did adapt, but I didn't change the pineapple sauce at all. I baked some tofu and made a separate stirfry of broccoli, onions, seitan, and mung bean sprouts with the pineapple sauce.

I made jasamine rice to go with it - IN MY NEW PRESSURE COOKER!!! It only took 6 minutes. That's faster than a boil-in-the-bag, not to mention 1000 times better. 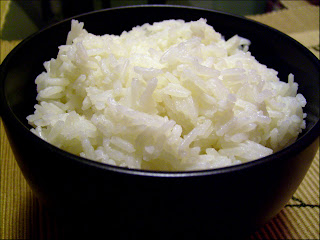 Here's a shot of dinner and Chase's plate. 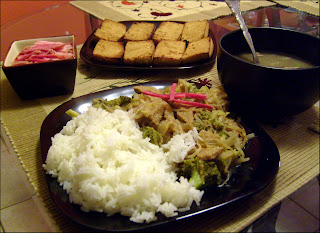 No baking tonight. Dessert was what I call Natural Fruit Salad. Here's what's in it: green apple, gala apple, cara cara orange (thanks, Kati!), pomegranite seeds, nectarines, mango, green grapes, cherries - from a can :( , golden raisins, toasted almonds, coconut, crystallized ginger, and just a dash of vanilla. It's so delicious. There is no need to ruin it with sugar in any form! 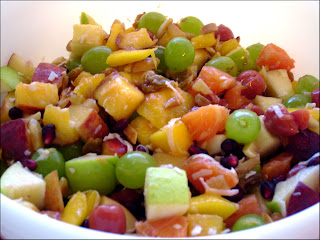 But just in case it didn't satisfy our collective sweet tooth, I offered sesame candy we picked up at the asian market. It wasn't near as good as what I made before Christmas. It only had seeds on the outside, and the inside was like hard gelatin you could barely get your teeth through. 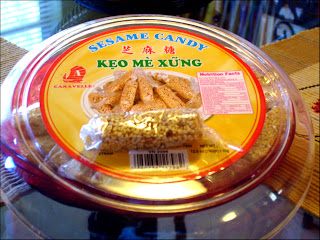 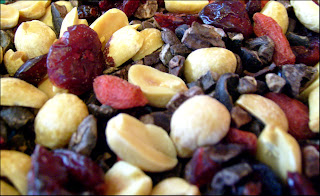 It sure is hard getting out of the holiday eating mode. Thanks again to Bryanna and Susan for their healthy and delicious vegan inspirations!

AN UPDATE - Monday a.m.
I woke up this morning to breaking news that 11 blocks of downtown, including my office building, are closed until noon because dozens of dead birds were reported in the area. HazMat teams are trying to determine the cause, but so far have come up with nothing. This closure affects hundreds of businesses, including not only law offices, but banks, local retailers, and restaurants. I have since learned that there are less than one dozen dead birds. I feel both sad and a little scared. Although I know the real concern is for human safety, I think it's pretty cool of my city to react so strongly to this situation.
2nd UPDATE
After a live press conference, I've learned that about 50 birds were found dead within a two block area and poisoning is the suspected cause.
Posted by aTxVegn at 8:25 PM

Those bright colours are gorgeous! And it is so cool to see raw chocolate getting a mention in the non-raw world! I only wish it was so readily available here in Aus!

I thought the potato miso soup look grand, now your picture reaffirms that. The slald and gorp look reall tasty!

You always find the most fun and exciting fruit at your farmer's market! I was eyeing that miso soup. Maybe tonight for dinner. I'm now officially jealous of your pressure cooker. I must look into one of these. 6 minutes? WOWWWWEWEEEE!

That fruit salad has me drooling.

Hi Diann,
I love seeing all the stuff you make. I agree that it's hard to get out of the holiday eating mood. I really had to control myself at the grocery store yesterday!

The fruit salad looks and sounds amazing!! Fruit is the best.

Also, those radishes are gorgeous. I'm not really a big radish fan, but I can definitely appreciate the joy of finding new & beautiful & unusual goodies at the farmers market. It's so fun!

How do you make rice in a pressure cooker? I've got a pressure cooker, but I really don't use it much because I don't know enough about it (My mom got it for me at the thrift store). This year she got me a thrift store crock pot too - I've gotta learn how to cook with these handy devices. 6 minute rice is definitely something I'm interested in!

Poisoned birds? What the...? That is so disturbing. Be safe.

On to the food. I love radishes of all kinds, but have never seen a watermelon one. Thank you for always expanding my horizons with new produce!

And I second Amey's question: how do you cook rice in a pressure cooker? My instruction manual says not too, because it would foam too much, so I've never tried it. What proportion of rice/water do you use? Cool...

The radishes are stunning... Beautiful veggies are so much more fun to cook and eat!

Everything looks good, especially the gorp (love that stuff).

Whoa, that's a crazy situation with all the dead birds! Poisoning? let us know if you find out more.

I love the foods you made and how colourful they are! I love the radishes!!! Thanks for showing them whole, peeled, and then sliced...I love seeing all the steps and what they look like!

Your fruit dish is awesome. Do you buy the pomegranate seeds as seeds, or do you get them out of the fruit itself? (Just curious if the seeds are sold separate of the fruit?) Looks great!!!!!!

I was enjoying your gorp pics, then was stunned by the news of the birds!! What is going on?! That is really strange. I am curious about what happened! Like Bazu said, be safe!

You are so lucky to live in an area that still offers so much variety of produce during the winter months. In Seattle we currently have a choice of apples and potatoes, maybe a few greens if we're lucky.

That is pretty sad if someone poisoned all those birds. I hope it was not intentional.

Looking back on my previous comment, it would help if I did a little proof reading before hitting the send button... eek!

Freaky about the birds!

First a bird update. I was able to get to my office by 1:30. Since the birds were found a few blocks from our capitol building, we had policemen, firemen, FBI, and military on the scene! They determined there was no threat to humans, but still don't know what caused the "bird die-off" as they're calling it.

Freedom, I thought about you a lot during this post!

VV - I highly recommend the soup AND a pressure cooker.

Amey and Bazu, to cook white rice, bring 1-1/2 cups water to boil, add 1 cup rice and stir, then close the top. When the pressure thingy starts jumping, reduce the heat and it's done in 6 minutes. You can double the rice and water. For brown rice use 1-3/4 cups water and cook for 18 minutes.

Candi, I seeded the pomegranite. It wasn't fun. Thanks for liking my radish pictures - you too, Laura!

Jennifer, I'm surprised you don't have more produce at your farmers market. Wish you could visit mine!

Oh, Dori, I've made you a paranoid proofreader. As I said before, I'm sorry but it's my job and I can't help it!

How sad and scary about the birds - what kind of poisoning do they suspect?

I've been eyeing pressure cookers but I have vague memories of my mother's friend's kitchen after a meal exploded (granted that was in the 70's) so I'm a little scared to buy one.

you are so lucky to have a farmer's market year round! and i got my hands on a watermelon radish recently - so pretty & yummy! any more news on the birds?

The colors on those photos are so gorgeous. Mother Nature is quite an artist--and so are you.

Poor birdies-hope they found the cause of the problem.

How scary about the birds!

Yum, we had Miso for dinner last night at my house. And that radish is gorgeous. I <3 radishes (and the turtles will eat them too, sometimes. Not always. They are picky eaters.)

wow that bird things si so scary, i cant wait to know what cause that!

The pictures are very neat, indeed!


The bird thing has me puzzled, too. Please keep us posted if you hear more...so far I haven't.

Wow, those radishes are so cool looking! I love your whole meal, incredible. I haven't made regular rice in my pressure cooker yet, only risotto. I'll have to try that.

I love making big fruit salads. One of my favorites is apples, pears, segmented oranges, and banana slices with some lime squeezed all over it.

Wow, what a tragic thing with those birds. It's nice that they took it seriously and investigated it.

Love your farm market veggie finds. Those radishes are so neat!!! I've never seen those varieties before. Now I'll have to keep an eye out for them when farm market season gears up here in the late spring.

Mmmm, the Potato and Mushroom Miso Soup sounds so good. I don't think I've ever had a miso soup with potatoes in it. What a great idea.

Wow, jasmine rice only takes 6 minutes in a pressure cooker? That's awesome!!! What a tasty looking meal you had. The radish salad looks great in your square bowl.

I saw the scare about the dead birds in Austin on the news. Poor things. Very scary indeed as it could have been any number of causes. WTG on Austin's swift reaction.

The food looks fabulous! 6 minute rice? Edumacate me, please! I did pressure cooked rice once and it took a good 45 minutes. Granted, I made 4 cups of rice, but still. I need a tutorial!

Sorry to hear about the birds. Glad to hear the city was cautious!

You are so lucky to have a Farmer's Market where you live!! And one that has all those different varieties of produce ! wow :))

What a beautiful meal ! Eating at your place must be like eating at a restaurant.

I am so sad about the birds :( and it really is scary .