Around the World Cooking

I guess I’ve just been plain ol’ hungry lately, cooking up whatever looks or sounds good to me. I did play with my new mandolin and yes, I did slice my pinky pretty good playing with baby carrots. All the while I kept saying, this is not smart, this is not smart. But I didn’t contaminate the food, and when the bleeding stopped, I kept on going. First I practiced on a cucumber and made a simple ribbon salad. 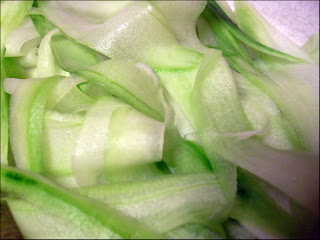 Then I made a carrot and peanut salad I had seen on a couple of blogs. I didn’t really like it. Maybe I was mad at my new toy. 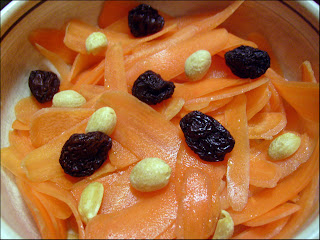 This dish I totally loved. Red Beans and Peas from Japanese Vegetable Cooking. It has kidney beans, peas, and dried apricots, and is seasoned lightly with sugar and salt and served warm. 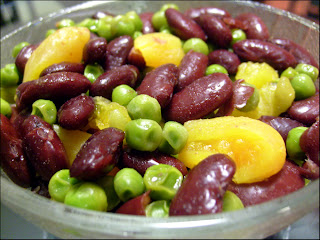 Dal Masala – I used a spice mix from a box I got at Gandhi Bazar. It just doesn’t compare with toasting my own blend of spices. 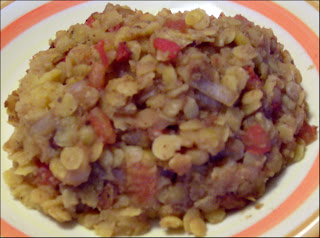 Chase dropped by hungry one night. I was already prepping to stirfry some bok choy, so we made a tofu stirfry to go with it. 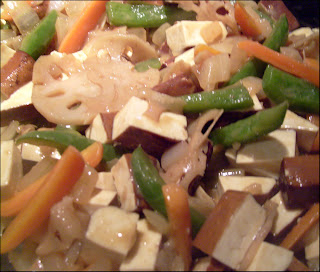 I found baby baby bok choy at my Asian market and I have just gone nuts over them. I hope they’ll have them again sometime. Aren’t they just the cutest little things you ever did see? 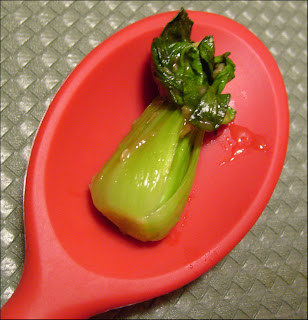 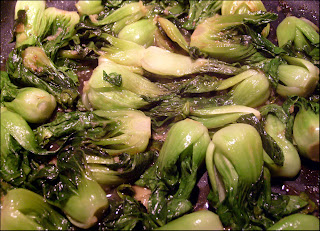 Chase was kind enough at his birthday dinner to let me take a picture of his plate. He ordered veggie tacos – avocado, mushrooms, nopalitos, and veggie chorizo on red corn tortillas. Served with black beans and rice topped with bananas! 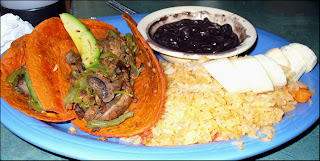 I ordered veggie enchiladas. I asked the waiter if the filling had cheese in it and he said no. For some reason our food took an hour to come out, and my plate arrived covered in cheese! I was scraping it off, starving, and the waiter saw me and said, “You didn’t want ANY cheese?” Why would I not want it IN my food, but want it ON my food? I know I’m weird with food sometime, but geez! He promised to fix it quickly and sure enough, I had a new plate with no cheese in 3 minutes – and it was free. I’m still wondering why it took an hour to get the first food, and only 3 minutes to get the next plate.


I finally took a small box of meat cookbooks to Half Price Books. They paid me $26 for them. I was only expecting $20, so I was pleased.


Here’s a couple of shots from the last day of my visit from my sister and nephews. These were taken while we were playing washers while our barbecue dinner was cooking.

Aunt Diann and her boys.... 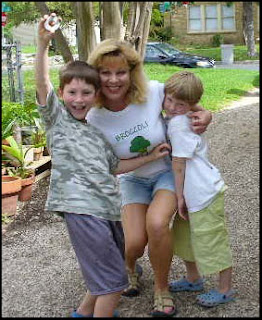 The family, except my mom, who's taking the picture.... 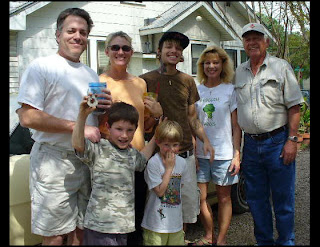 I hope everyone enjoys their Easter holiday!
Posted by aTxVegn at 9:40 PM

I'm glad to hear that your new mandolin works well, even on pinkies!

The food looks great. Too bad that you had to wait so long for your food in the restaurant. It's weird that it came so quickly when you re-ordered it, but hey, at least it was free!

Red beans and peas looks wonderful. Baby bok choy! Wow, I have never seen them before. Hecka cute. Are they sweeter in taste?

I am sorry you and your mandolin had a disagreement. I hate that when it happens to me. It has happened more than once with my shredder and I am sure it will happen again. lol

Happy Easter to you, too!

I love your mandolin creations (sorry about your pinky, though!)

And yes, my love of baby bok choy knows no bounds... I don't remember the last time I ate regular bok choy =)

I wonder if they just took the cheese off when you reordered it? the food looks yummy!

I don't even know where to start - except to say I LOVE YOUR BROCCOLI T-SHIRT. It's too cool. You are so creative with all of your meals. I have been stuck in a rut lately and have been cooking a lot of comfort foods. When I get stressed and busy that's what I tend to do. Lots of carbs. Tonight was pot pie. Last night was pizza. Lunches have been pasta salad. You get the point. I need to get out of this and start eating more greens!

Marty and I are driving out to CA soon and on our way home we're stopping by Austin to visit with a dear friend who just had twins! It'll be around the 2nd or 3rd week of May. I'd love to meet up and have lunch or dinner one day with you if you're interested. Email me at vivaciousvegan at gmail dot com.

Well I can see why you didn't like the carrot salad.. it looks real boring! But the red beans and peas looks really good! I've never had bok choy but darn if it isn't cute haha. Love the family pics :-) looks like you are having nice weather. Happy Easter!

And the baby bok choy is so cute! I want to hug it.

I dig yer t-shirt with the broccoli on it. Awesome.

I cannot tell you just how much i empathize with you about the veggie enchilada that you ordered. i have SO been there and it is SO incredibly frustrating. I've never been one of those "send-it-back" types but i've had to do it, WAY too many times.

It's why i rarely eat out at non-veg restaurants anymore. Not worth it.

Way to get some good cash for your "meaty" cookbooks, Diann. ATTAGIRL!

Thanks, Judy and Sheree!

Bazu - I'm jealous you get baby bok choy all the time!

TC - that's a scary thought, but I had already scraped the cheese off and made a mess of my plate, so I'm sure I got new food.

Crystal - I emailed you!

Tania - You know those recipes that start off "Sometimes the simplest things taste the best." Maybe for chocolate, but not for carrots!

Kleo - It's hard to eat out when you're trying to accommodate vegheads and meateaters. I should have ordered the same as Chase.

Oh fun!
I love the family pictures... everyone looks very happy to be together!

These mandoline pictures are making me want one of my own! Except maybe if you put a picture of your pinky up - then I'll be tempered. :)

The peas and beans looks very nice. I might give that a try. Also, those baby bok choys are cute cute cute!!

First of all, your last post, Happy Birthday to your son! He is so handsome! Also, your food looks AMAZING! You are really presenting the food beautifully.. love it!

This post is great too.. I really want a good quality Mandoline..
of course, I'd probably cut myself too.. I seem to do it all the time with the basic stuff.

I think baby bok choy is the CUTEST vegetable EVER..

ha ha...I have cut myself many times on my mandolin...and I keep telling myself not to use it without the hand protector...then I tell my self, "well, just this one more time"....and guess what happens.

I love love love baby bok choy!!! It's one of my favorite things. Chase's birthday dinner looks great. Ugh, that stinks about them bringing your food covered in cheese. Glad they fixed it. That is really strange about the wait for your food though.

WTG on selling to Half Price Books. Glad you got more than you expected. Did they give you a 10% coupon too since you sold books? Did you buy any books while you were there? I do not have enough willpower to walk out of HPB empty-handed. LOL

What great family pics. Love your broccoli shirt!!! Your nephews are lucky to have such a cool vegan aunt :)

baby bok choy is so cute! and if I were your daughter (a delicious thought) I'd show up hungry every day! Happy Easter to you and your family. :o)

I admit I still fear the mandolin. It's a scary kitchen gadget, isn't it? After seeing your delicious creations, I may have to reconsider.

What a lovely family photo! I love that you took us around the world with your meals in one post- what fun!

I love the concept of a ribbon salad--so you use a mandoline?


ALl of those dishes are so colorful--phytochemicals...yum!

Don't you hate resto screw ups? I once ordered a vegan burrito at a Mexi place here and got one with steak in it. I nearly passed out. (They gave both me and my husband a free dinner that nite!)

Happy belated birthday to Chase! It sounds like you threw him a great celebration.

I'm sorry you cut your finger. I'm a little scared of the slicers I've seen. I prefer using the food processors or a plain old paring knife. Hopefully it's healing well.

Your food, as always, looks great. I love the baby bok choy. I have never seen them that tiny.

Love the family photos -- looks like you had a nice visit with your sister/family.

People think it's so WEIRD when you don't want cheese! I'm glad you only had to wait three minutes for your new plate. Yes, baby bok choy is so cute--I love the stuff, too. You and I should get together and have an Indian food pow-wow sometime soon! ;)