I cooked all day and it was totally worth it. First I baked a loaf of Chickpea Potato Bread. I couldn’t taste the small amount of chickpea flour or potato flakes in it, but it was very good bread with a nice crust and texture. 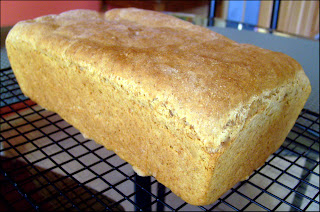 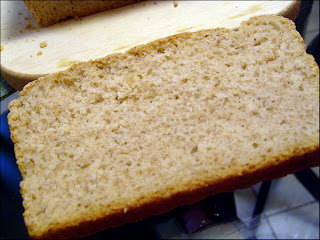 The next thing I made was cake, but we’ll get to that in a bit. I baked some tofu for Chase. (I’m still abstaining.) 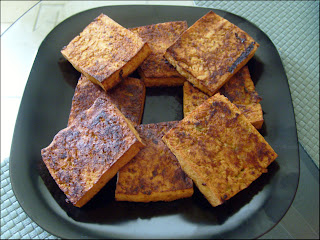 I made Spicy Chickpeas and Potatoes based on a recipe from Foods That Don't Bite Back, using your basic Indian spices and two cans of Rotel tomatoes. I made these early and let them hold over a low heat quite a long time. They were really tasty (and still steamy in this photo). 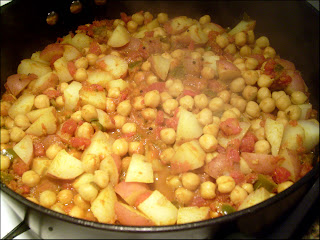 The most involved dish was Kullum, or Cabbage Rice, from Rice and Spice. First I prepared Basmati rice and carmelized some onions. Then I tempered the spices, added in some mild green peppers and instead of cabbage, I used broccoli slaw, and let the slaw soften. Then I put the onions in the bottom of pot, then half the rice, all the slaw mixture, then topped it with the remaining rice. It basically steamed while I fixed the rest of the meal, then got mixed altogether before serving. I didn’t really understand the layering procedure, but we really enjoyed this rice dish. It was a delicious departure from the norm. 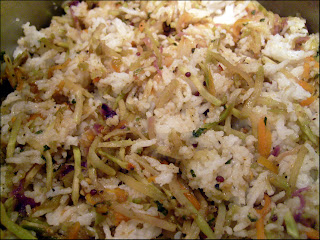 Finally I made a Broccoli and Pepper Coconut Curry. It was really spicy tonight! I’ve been using the same Mae Plo green curry paste for years. Since this time the curry seemed especially hot, I asked Chase to check the ingredients. The list included mild green chilies and SHRIMP paste - ahhhhh! Darn those fish ingredients! I started using this paste pre-vegan and didn’t think to check the ingredients. Oh, well, the stuff was too spicy anyway, even if I only used a teaspoonful! Say No to Mae Plo! 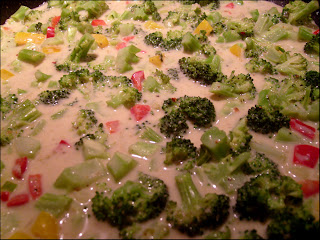 I had to make strawberry avocado salads for Chase and Liz. Chase usually just tolerates salads, but he really really liked this one. 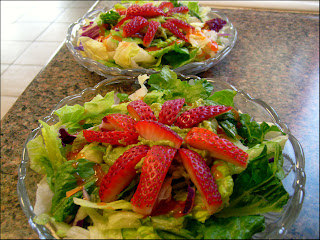 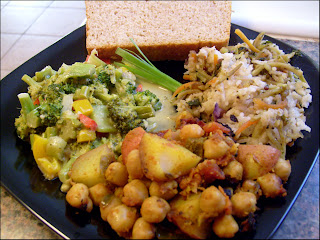 ….and here’s our spicy table. 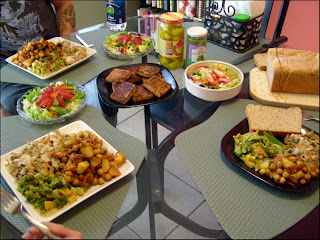 All the dishes turned out really great, and thank goodness I made a cool cake for dessert. I made LDV’s Yella Cake and poked in some blackberries (I’m overstocked with blackberries!) and added in cinnamon and allspice and extra Mexican vanilla. I made VCTOTW pineapple topping to spread over it. 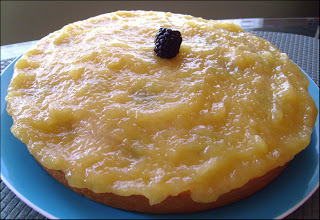 I had stored it in the refrigerator and we were anxious to have something cold and soothing. The cake is so moist and perfect, and the pineapple topping is killer! I served it with extra berries – oh so good. 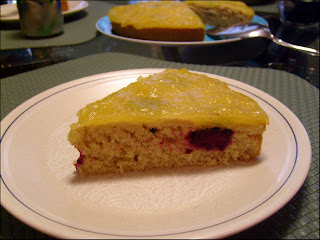 Chase wasn’t feeling too good tonight, but he said this meal and a couple of slices of cake brought the first smile of the day to his face. That’s why I keep cooking for him!
Posted by aTxVegn at 10:07 PM

That chickpea potato bread looks and sounds really good, where did you get the recipe? Your dinner looks amazing as always, especially the cake! And the art show and potluck in your other post sound like great fun! I love the green robot (?) picture of Liz’s. I think your cobbler is really pretty!!

Boy, looks like you had a wonderful day cooking. The results are fantastic. I am sorry your curry paste had to sneek in those yucky shrimp nasties. I love the bread. I would love the recipe if it is ok to share.

Oh my cabbage/rice looks tasty. I have to put this in my to make pile.

Hope Chase if feeling better. VCTOTW can help anyone find their smile. :o)

We definitely have the same taste in food. You have got my tummy grumbling again :)

Your salads look so pretty!

That bread looks delicious - what a great crust. I'd also love to try that cake. I wish I had an overabundance of blackberries - that seems like a good problem to have!

I never heard of Kullum! I want to eat it it sounds so delicious! I love that you poked some blackberries into the cake.

Hi There,
just to let you know that I have linked to your Funky Tacos as a good example of a veggie snack for my National Vegetarian Week (UK) post. Hope you don't mind!

Oh everything looks delicious & nutritious as always- and that's so sweet that that yummy sweet brought a smile to Chase's face.

I need to catch up below and read about your funky tacos...

wow so much cooking! all looks very good!

I'm a fan of the brocoli slaw too. It's always a good change from cabbage. Those strawberries look so deliciously plump and fresh. YUM!

I love that last line- you are such a great mamma, and I'd smile too if you were cooking for me.
Everything looks great. I've always wanted to try a potato bread type thing.

Hi Diann, I just caught up on all your previous posts that I missed while I was away. You've really been cooking up quite a storm. There are so many delicious and inspirational ideas here, I can't wait to give some of them a try (although I'm pretty overwhelmed right now so it might take some time). I'm so sorry I didn't get a chance to meet you while we were in Austin. We wound up cutting our trip short by a few days (we were both homesick) and only stayed one day in Austin. Though, the next time we get out to Austin, I'm making it a point to meet up with you. I love your city - it has such a fun and funky vibe - so I definitely plan on being back. Glad to see you're doing well.

I missed a couple days of posts, so I had a lot of catching up to do!

All the food looks awesome, as usual. The cake sounds really nice refreshing, and it looks pretty too.

Wow, this post looks exceptionally yummy! I would love to have the bread recipe if you wouldn't mind sharing. My email is denise@denisemuller.com. Don't forget to check back at my blog, we seem to like similar foods :)

that bread looks like perfection!!!
I don't know what's wrong with me but the last time I attempted to make LDV's yella cake, it was a disaster. boohoohoo!

Hi Diann, I would love the recipe. shereeb@cox.net. Thanks

Everything looks so good. I adore curried chickpeas. The rice sounds very interesting. Is Rice & Spice a Robin Robertson book? I have a couple of hers and quite like them. The cake looks like a perfect finish!

Everything looks awesome!... that salad is calling my name. I am intrigued by the pineapple topping.. I'm going to get my book and look at the recipe.

Chase is a talented artist! The potluck looked like fun.. with great food! Cream of wheat with veggies in it? That sounds very odd.

I'm catching up on your posts. Chase and Liz are both very talented. Your potluck bean salad looks great - I would love the recipe.

I've never heard of kullum but it looks great. Your curry looks really good and creamy. Too bad about that curry paste.

Have a great weekend!

The Chickpea Potato Bread looks great and the Kullum sounds absolutely delish. Ugh, that stinks the curry paste you always used now has shrimp paste. I hate when products suddenly change to non-vegan without warning. Thanks for the heads up.