Sunday was the first time we reached our normal high temp of 100 degrees. Inspired by Urban Vegan, Megan, DGMGV, and Vegan Noodle (sorry if I’ve left anyone out) we made a Sushi and Summer Roll Sunday dinner. We used half sheets of nori for the sushi and they were difficult not to overstuff. Chase made most of it. He got creative and rolled up some baked tofu along with red pepper, daikon, and cucumber. 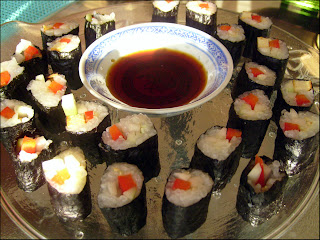 I tried to be creative with the summer rolls. We filled the rolls with leafy greens, broccoli slaw, cilantro, mango, avocado, onion chives, and baked tofu. I wanted a couple of rolls without tofu for myself. To distinguish the rolls, I rolled the filling without tofu halfway, then added the chives, more cilantro, and the tofu (or not) so you could clearly see which roll was which. 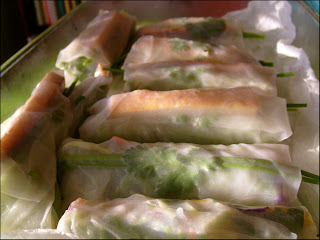 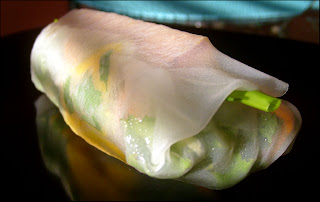 I also made a yummy salad with spinach, mung bean sprouts, radish, oranges, mango, craisins, and peanuts. The fruit was so juicy I only needed a little dressing, so I mixed up 1 tablespoon each of soy sauce, maple syrup, and cider vinegar, and just a teaspoon of sesame oil. 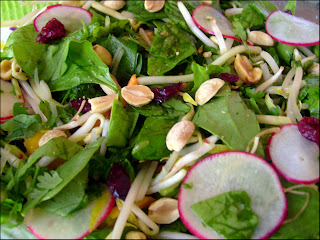 I even changed up the broccoli and added a miso dressing using a recipe from The Saucy Vegetarian. 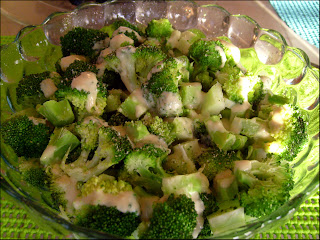 What a nice, light, and refreshing meal. Here’s a plate….. 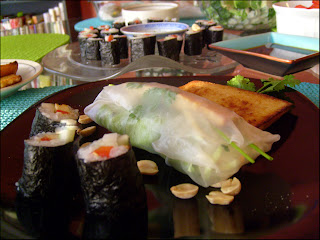 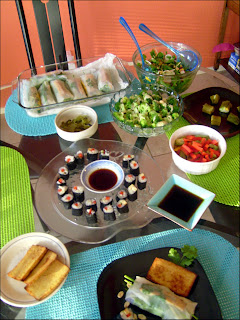 I have been anxious to make Green Bean Swirl Bread ever since I saw it on Dr. Stonielove’s blog. The green paste is verrrry sticky and a little difficult to work with, but this is a delicious, slightly sweet bread. My top separated - that's never happened before - but we just overlooked that. 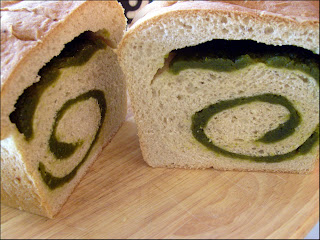 Isn’t it pretty (pretending the top is fine)? I’m envisioning a version with cherries in it for Christmas. I toasted slices of the bread and added fresh fruits and NadaMoo vanilla for our dessert. The bread is really nice toasted. 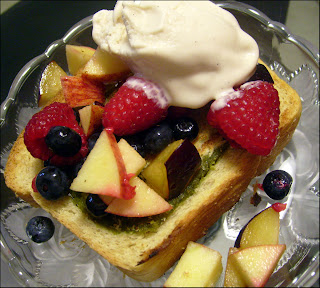 Yesterday was my mom’s birthday. She requested VWAV Lemon Gem Cupcakes. I reminded my nonvegan mother that she was asking for vegan treats, and she assured me those were her favorites. Yay! We like cake and not so much the frosting. Here’s what I hastily baked Monday night. 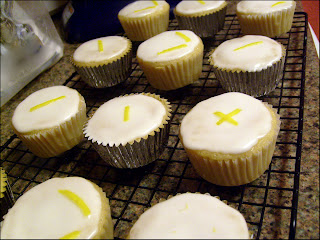 They were the best batch I’ve ever made. The cake was so soft and lemony. Last night we went out to eat at my mom’s favorite seafood restaurant. She called ahead and was assured the chef could prepare two vegan entrees. On most occasions, Chase and I have been very well accommodated. But last night we were shocked when the waitress told us the chef could make us baked potatoes without butter. I almost said, Well I would hate for him to go to any trouble. But we made out okay. We ordered broccoli without hollandaise, sugar snap peas in sesame garlic sauce, and soba noodles without crab on top. Nothing was picture worthy, except the decoration on my mom’s dessert. 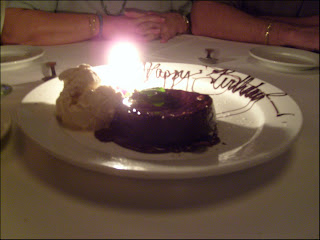 That's it for the family birthdays until next year.
Posted by aTxVegn at 6:53 PM

Sushi and summer rolls are so good. I want sushi now!

That is really disappointing about the restaurant. At least you got a bit more variety than they said.

what a beautiful dinner, that sushi looks Splendid!

happy birthday to your mom!!

It was a day of stellar "S's" for you, Diann. Sushi! Swirl bread! Summer rolls! Salad! So deliciouS! i am really big on summer rolls and i like what you made and what Chase did with the sushi as well. Talent, i'm tellin' you!

It's been ridiculously hot and humid HERE, and we're not that far from the coast, so i can only imagine the temps by you. OUCH. Global warming, there can be no doubt...

Happy birthday to your mommy. Those lemon gems are true gems. i love that she asked for vegan treats. Way to go, mom! How perfect they were the best you've made yet!

The restaurant did a nice job on that dessert. Really pretty.

Wow, your sushi and spring roll spread looks awesome! I just love making both...fun without slaving over a stove in the Texas heat. (although we're bracing for more rain now thanks to Ms. Tropical Storm Erin).
Those lemon gems look so dainty , I can just imagine the lemony cake, yum.
What a bummer about the restaurant. Always a shame when the chef assumes that being vegan equals a baked potato or pasta with olive oil. C'mon!

I really need to try sushi. I am afraid of the taste of the nori. Once about 29 years ago we were having a family dinner at my sister-in-laws house. She made macaroni salad, which I love. I took this great big bite and YUCK!!! she had put crab in it. GROSSSSSSS! Needless to say I am so afraid sushi will taste like the crab since it is from the sea. I ask myself on more than one occasion, "How brave am I" Every vegan I know loves the stuff. Yours looks wonderful. I wish I lived closer so I could be with friends in hoping to get the courage.

The rest of the meal looks great! I was so intrigued by the green pea bread. Yours turned out great! I don't see any separation? :o)
I have to check out VwaV from the library again. Well, get on the waiting list at least. Your cupcakes look refreshing. This is a good thing in the heatwave we are now having.

I am glad you were able to have something at the restaurant. Happy Birthday to your mom! How is Smokey handling the heat? Bunnies do not like it at all. Sadly I lost my bunny about 8 years ago during one of our worst heat waves ever.

Oooooh, you know I am loving those sushi and spring roll photos. Yum! Perfect refreshing meal for a hot day.

And I'm sorry about the restaurant. I can understand them saying it if you'd just shown up, but your mom called in advance! But I'm like you- I would have made a creative meal out of various veggies and sides. Your meal actually sounds pretty tasty to me! It's so nice that you and Chase have each other as a support system. Did both of you go vegan at the same time?

Those salad rolls look gorgeous! I just bought two more packs of the tapioca flour wrappers. I like to put tempeh in my rolls, carrot, cucumber, cilantro, and whatever greens are on hand. Peanut sauce... I seem to always get myself all worked up over food when I post comments herre :)

Oooh, I've had my eye on Dr. Stonilove's bread ever since she posted it. I was thinking it would make a great French toast bread (and after you mentioned the fact that it tastes great toasted, I think I'm going to have to make it ASAP!).

yeah for your mom requesting vegan cupcakes for her birthday. the lemon gems are one of my favorites also.

The green bean swirl bread is so pretty i'm going to have to check that out! I like your ideas for one with cherries for christmas.

What an elegant dinner ! And that bread looks amazing.

Funnily, I made a salad with mung bean sprouts today. It was the first time I succeeded the way I wanted sprouting mung beans.

Happy Birthday to your mommy !

Your spring rolls look so perfectly rolled. I'm always frustrated/exhausted after making spring rolls, but in the end it's worth it because they turn out great.

I'll have to try mango or broccoli slaw sometime - I usually do cabbage, diced carrots and celery, cilantro, and avocado. Beautiful photos!

your table, set with all of your latest culinary creations, is stunning. ABSOLUTELY stunning. and wow, that swirl bread is striking as well; especially all dressed up with the NadaMoo and berries :0)

wow, your experience at that restaurant sounds like the one I blogged about a few weeks ago - it's funny how amazing some restaurants are at catering vegans and other dietary restrictions/lifestyles, while others are completely lacking in concern for those groups of diners. makes me angry, but I'm hoping the more restaurants will follow the ones that DO cater to vegans/vegetarians, and other such diners.

my hubby and I are over due for a sushi and summer roll dinner.
yrs looks perfect!

Your plate and table look so attractive. It's almost a shame you ate it. :o) The bread looks very intersting indeed.
Happy BDay to your mom!!

sushi and spring rolls...such refreshing combination. yours are all beautiful!

i, too, was taken with stonielove's bread...haven't tried it yet, but love your fruit laden slice. yum!

I love your summer rolls, no wait I love the entire spread yummy!
Thank you for the offer of a raw pizza recipe, that would be fabulous!
I am still at the experimental stages of RAW at the moment, trying to find out what I like.
Thanks for the support :)