I’ve tried making two kinds of impossible vegan veggie pies. It may be impossible on two accounts, but I think this is a good idea, especially for us gluten free, soy free types. I’m not 100 percent happy with my recipe yet, but I’ll show you what I did, then I would love for any of you to give it a try yourself or give me some tips for gluten free, tofu free, savory pie perfection.

I found a new item at the grocery store. 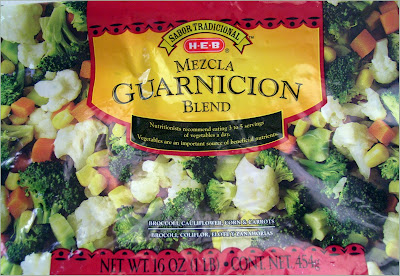 I have no idea what *guarnicion* means, but these are tiny chopped mixed veggies. I normally wouldn’t go for such smallish cuts, but they are perfect for veggie pies. Oooh, they would be great for samosas too! (I found them at HEB.)

For the first pie I made, I seasoned the veggies then laid them in the bottom of a pie plate. 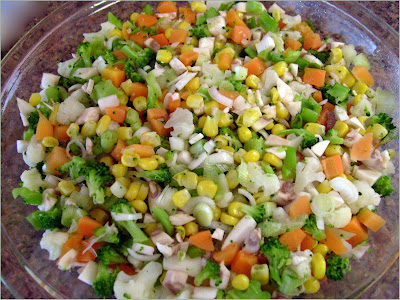 I topped them with a gluten free blend of rice flour, corn meal, and corn starch. 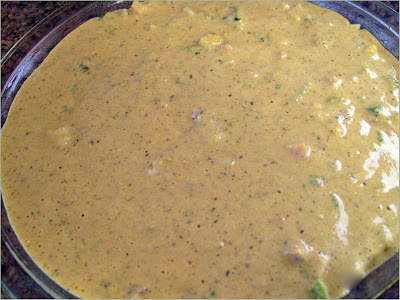 It was a little thick and I thought it may not sink in very well. Here’s the baked pie. 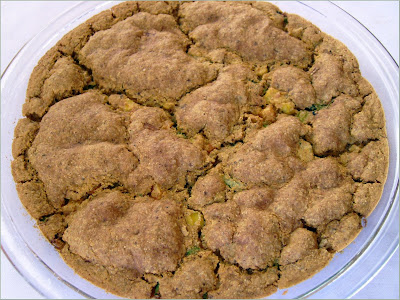 And here’s a slice. 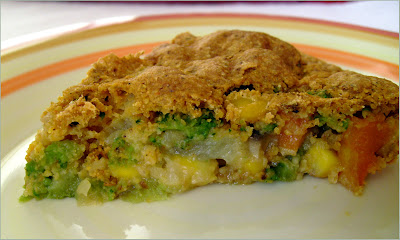 I was right. The filling didn’t sink into the veggies very much, so it was really just a pie-shaped veggie casserole with a cornbread topping. It was good and I ate it, it just wasn’t what I was after.

The next pie I tried was Impossible Vegan Veggie Pumpkin Pie. This time I mixed a cup of pumpkin puree right into the seasoned veggies, along with a little gluten free flour. It turned out like this. 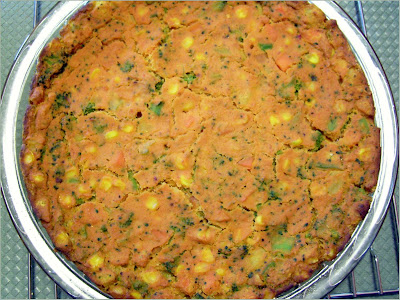 I actually forgot to put in the cornstarch, so even though it did set, it still wasn’t just what I wanted. 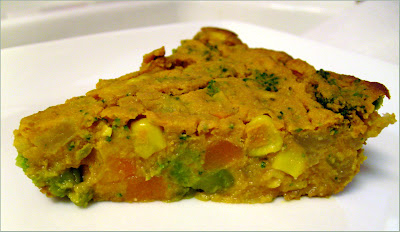 I liked this version much better, and I think if I remember the cornstarch next time it will be really good. I’m sort of burnt out on veggie pies now, but let me know if you want me to keep working on a recipe.

One simple simple and completely delicious thing I made was a salad dressing. I can’t remember where I read about it, probably on a raw site, but it said to chop some fresh mango and fresh tomato in a food processor for a tasty dressing. So I did and it was yummy! I put one mango and two romas in my mini food pro and had dressing in a jiffy. 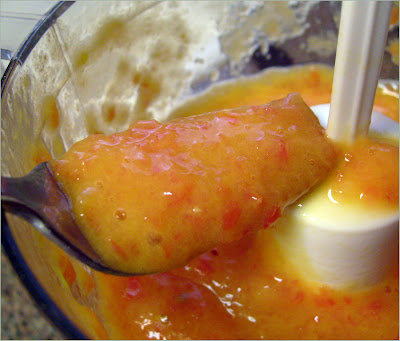 I put tons of it on a big salad. 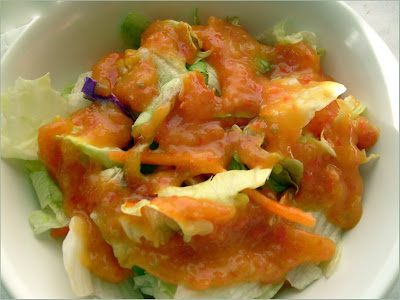 Nothing but mango and tomatoes. Try it, you’ll like it!

I’ve been enjoying reading about all of your holiday meals and treats. Our family always goes out for Easter dinner and we had a spectacular meal this year. If you’ll remember from my last post, I did make a treat for Chase and I asked you to guess what I had covered in chocolate. 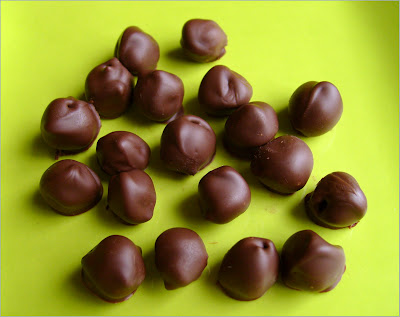 Melody, I love your idea of chocolate covered wasabi peas, and so would Chase. Jessy, I ADORE chocolate covered blueberries – kinda wish I would have done that, but then Chase wouldn’t have gotten very many. And Anonymous, I love your idea of spicing the chickpeas with cinnamon and chili before roasting! Thanks for playing along. You guys are the best!
Posted by aTxVegn at 7:15 PM

I thought they looked like chick peas, too, but I couldn't believe you would dip chick peas in chocolate! Guess I was wrong. I like the idea of spicing them like mole with chili, cinnamon and cloves.

The idea of an impossible pie is s good one, even if one is just soy free. Might I suggest a thinner batter and maybe using some chickpea flour. Maybe expanding on the "Fronch Toast" from VwaV as your batter.

Wow, I wouldn't have thought of chocolate covered chickpeas...! Sounds like it has the potential to be addictive-ly delicious though.

I really want to try the mango and tomato salad dressing. It sounds strangely good!
How long do you roast the chickpeas and at what temp? I have seen chocolate covered roasted soybeans but I like the chickpea idea.

I love the idea of the impossible veg pies - I grew up with my mum making impossible pies. Comfort food!
I think roasted chick peas would be delicious covered in chocolate! I mean, isn't everything better in chocolate? And roasted peanuts are good, so why not?

Aww, I hope your next veggie pie is perfect! I would totally eat a chocolate roasted chickpea!

I've never had impossible pie, so I don't know exactly what it's supposed to look or taste like, but I would eat yours! Loving the chocolate chickpeas too - I'm so intrigued by that combo. And I can't wait to try that raw dressing - looks delish!

I've never heard of impossible pies, so I have nothing to judge it on ... but yours LOOK good to me :)

And chocolate covered chickpeas?! Insanity. I must try asap :P

i might try that trick with the chickpeas to get my kids to eat them! i could see that being a fairly healthy lunchbox snack!

the first pie has come out amazing in particular! I LOVE the crust and the veggie goodness hidden underneath it :)

Hi TxVegan,
Your "experiments look great. I'll take the one that looks like cornbread (your veggie casserole). Great that you tried until you got what you wanted.

Sorry the pies didn't work out quite well. They look like they are off to a good start though.

Both the pies look great to me, whether the topping sank or not! And I, too, love the idea of chocolate covered chickpeas (though what a LOT OF WORK!!). I'm roasting some today--too bad I can't do the chocolate coating just yet (whine, whine). ;)

Chocolate covered chickpeas sound amazing! And your pies look tasty, even if the result wasn't what you wanted.

Looks pretty good. I'll have to give it a try.

I would never have guessed chickpeas. What an awesome idea. Did you roasted them yourself? Would love that recipe.

And corn starch or not- those pies are impressive!

i'm quite interested in your impossible veggie pie. i'm gonna have to think on how i can help make this work. are you going for something similar to a pot pie - like with gravy 'n veggies 'n such? :) and i have no idea what guarnicion means either, but those veggies look so tasty!

i never would have thought to combine tomatoes & mango - totally gonna have to try this out! thanks, Diann!

that dressing does look good. great idea! and you've got me craving pot pies!

Huh, so I was right about chickpeas! Yea!

The pies sound like you're on to something. I say, take a break since you're tired of them...but revisit the idea later. I especially like the pumpkin one.

You are so creative! I love making up new recipes and finding what works. Good luck on future attempts!

The pies look impossibly yummy. And I love the idea of chocolate covered legumes, or pretty much anything, for that matter.

I need to google impossible pies.. never heard of them before..

Yours look good though.. I'm sure you'll perfect your recipe in time!

Chocolate chickpeas.. that is awesome. I am soo going to try the wasabi peas one of these days..

Roasted chickpeas in chocolate? That sounds quite interesting!
Both of your pies look great and the vegetable mix sounds like a great shortcut.

You are certainly ingenius Diann! Who would have thought of covering chickpeas in chocolate. "you don't stick!" as my mother would say, meaning you don't give up until you work out a solution.

I believe that 'guarnacion' is Spanish for side dish -- not 100% sure.

Your dressing is beautiful. I love the reddish orange color. If I made it with mangoes, I might just have to drink it! ;-)

that dressing sounds so good! i love love love mangoes :) oh, and tomatoes.

will you marry me, already?

I like the idea of an impossible veggie pie, I'll be interested to see your final results!

That salad dressing sounds amazing. I bet it'd be really good with some fresh ginger, too.

I am so down with those chickpeas.
oh, and BUFFINS! pure adorable. :)

I miss HEB so much right now! And I will definitely have to try that mango tomato dressing.