My idea for a taco dinner took root when faux pork reappeared at the Asian market. I had long ago promised Chase I would make him the most fabulous pork and potato tacos, and finally it was possible. I don’t go for the faux stuff (it’s always made with soy anyway), so I decided to make myself zucchini tacos. Both taco recipes are from Rick Bayless’ Mexico: One Plate at a Time, and both recipes start with a “flavor base” of lots of dried chilies and fresh tomatoes.
I found plenty of fresh ingredients at the farmers market Saturday morning, including a giant zucchini (nearly 2 pounds) and tons of tomatoes, along with peaches, onions, tomatillos, jalapenos, squash, and apples. Here’s a portion of the goodies. 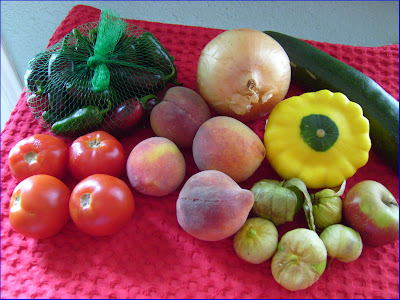 I used my biggest mixing bowl to rehydrate all the dried chili peppers I had seeded, cut, and toasted. 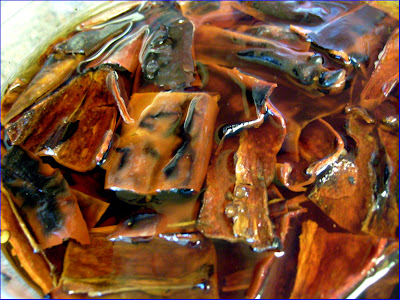 That’s a lot of peppers! I worked on the Tacos de Puerco y Papas (pork and potatoes) first, since chef says they taste even better the next day. I must admit, the puerco was kinda freaking me out. 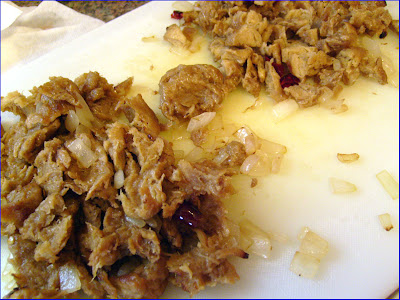 But many peppers and potatoes later, it all came together beautifully. I can’t describe how amazing the aroma was. And they tasted sensational. Look at the spicy goodness. 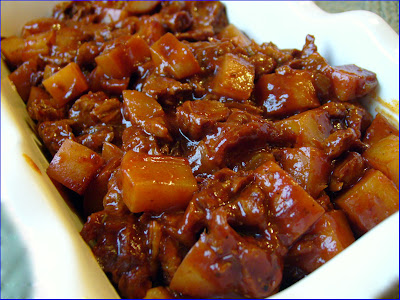 Next time I will make them with just potatoes so I can enjoy them too, and I’m sure they will taste as wonderful.
The next most fabulous part of the dinner was Green Sauce, a cool creamy sauce to add to the spicy taco filling. I found a recipe idea on Homesick Texan’s blog, here, and after my own touches, came up with this. 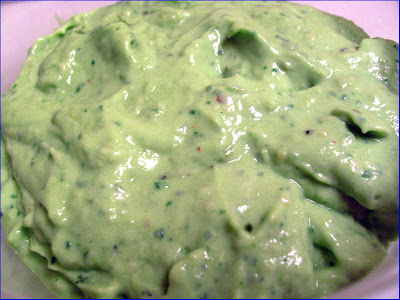 I’m sorry it’s a bad picture, but you’ll have to trust me that it was super terrific amazing. It’s light and fluffy and oh so tasty on everything.

My Tacos de Calabacitas (zucchini) filling was also very good, but as you can see, not nearly as spicy as the papas. 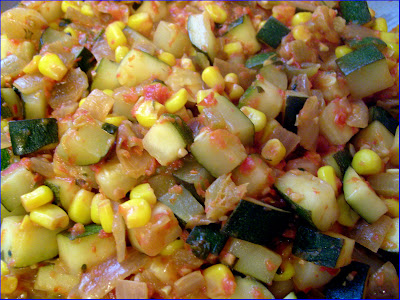 I also made Chili Pesto from The Artful Vegan, which was very good, Pineapple Slaw, Rice with Tomatoes and Green Chilies, and Black Beans. Chase asked me why the beans were so black and I explained that they were homemade and therefore hadn’t been in a can on a shelf for 2 years! Here’s our table full of spicy and wonderful food. 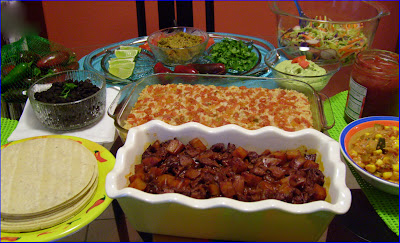 It really was an exceptional meal. Chase said it was the best he could remember in quite some time. Here’s his plate. 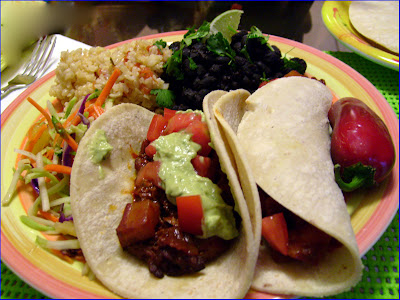 I tried to keep a Mexican theme with dessert as well. I made Coconut Banana Cake from Lickin’ the Beaters, and to brighten it up I served it with Pomegranate Sauce from The Artful Vegan and kiwi slices. 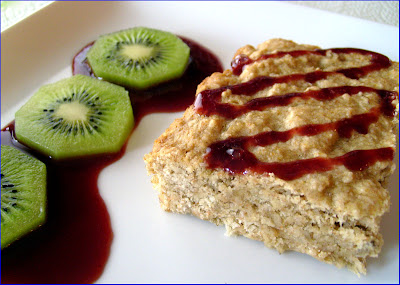 I did make the cake gluten free and chose it because the recipe had more bananas than sugar, but I still found it a little too sweet. My decision to add the Pomegranate Sauce was a good one. It was the perfect complement to offset the sweet cake, and added some great color too. This cake was actually the first recipe I’ve tried from Lickin’ the Beaters, and I was really very pleased. The cake texture was perfect – here’s a close-up. 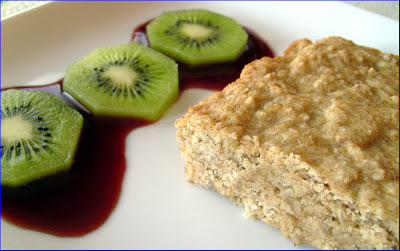 Maybe the food was so good because we were really hungry and in an extra good mood because it was only 90 degrees instead of 100, but I’m gonna have to say *Yay Me!* for serving up a pretty darn fantastic fiesta and another gluten free meal.
Posted by aTxVegn at 7:11 PM

Diann, you ALWAYS serve up amazing meals - so "yay you" haha ;0)

Wow! What a great meal, everything looks so good. I like the zucchini tacos...brilliant idea and the cake sounds really good too.

I really do want you to come cook for me!!! Everything looks so yummy. It is easy to see you truly love to cook.

I Am Gluten Free said...

Yes indeed. This looks fab. And so artfully presented. Can you tell me if the tortillas are gluten free and if so, where did you get them (or did you make them?). They look lovely. I make gluten free corn tortillas but haven't tried making gluten free tortillas with other flours.

I also appreciate your inspiration. We have our version of Mexican at least once a week and while I love it, am ready for a change of pace. This would be something to work towards!

Why do you rehydrate the peppers? Why wouldn't use just use fresh peppers and not dried? I'm just curious.

Again, many thanks and keep up the great gluten free vegan cooking. It is EXACTLY what I'm looking for. My cooking (and thus, my blog) are heading in that direction and it's great to have inspiration from others.

Wow, you made so much food and everything looks so wonderful! You're making me hungry!

Beautiful display on the dessert too. Great job :)

Crystal said...
This comment has been removed by the author.
9:43 AM

hoooooooooray for the farmer's market awesomeness! and what a glorious spead 'o delicious foods! WOW! i think the green sauce looks divine!

Wow that looks good. I'm coming to your house next time! :)

I'm not big into the fakey stuff either. Except the hot dogs. Gosh darn I still love a hot dog.

my uncle in germany makes this fabulous green sauce (Gruene Sosse), I'm imagining in my head yours tastes the same even if it doesn't (if it wasn't heavy on the dill then it doesn't, but I can still pretend) :)

What an amazing spread--everything looks fantastic (and that does look eerily like pork!).

Lickin' the beaters...haha, I think we all do it! The coconut banana cake looks amazing -- I love how you decorated it!

And once again, can you be my mom for a day so I can participate in one of your glorious feasts?

Ellen, thanks! I left a comment on your blog to answer your questions.

Erica, no dill in the green sauce.

Everybody, if you're ever in my neighborhood, please drop by for dinner!

I'm usually afraid of fake meat products, but your 4th photo is making me reconsider! What an amazing meal!

What a wonderful spread! I didn't like the look of the fake pork, I think I would give that a miss and go for your zucchini tacos or the other tacos with just potatoes. Sounds good. I am always amazed at the effort you go to for each meal and how amazing the finished display looks. It makes me really want to be there!

ok, i'm in town adn have yet to be a farmers market... where are they? i'd love to hit one up this weekend!!

wow! What a fantastic looking meal!

Teddy, the best market is Sunset Valley at Westgate and S. Lamar. The closest one is Downtown Market at 4th and Guadalupe. Always fun!

My mouth is just watering! I mean it, it is litterally watering! How Pavlovian, I see the delicious taco fiesta, and I'm ready to eat!

Oh man, what I wouldn't give for a real live taco right now.

Now that is one serious Mexican food feast. And yay for cooler temps!!

How good does this all look!?

MmMMmmm now that is a proper mexi-feast

What a feast! I'm impressed, as always. The pork and potato filling looks particularly great!

amazing amazing!! I don't know how you do it, but someday I'm gonna have to sneak over for supper. Especially on taco night, hoboy... :P~~~~~

I think you are a culinary superhero. I wish I had an ounce of your inspiration. I'm learning how to put meals together slowly but surely.