This month’s Daring Bakers Challenge was Caramel Cake with Caramelized Butter Frosting. The recipe is from Shuna Fish Lydon as published on Bay Area Bites.

The rules for this challenge were simple – make the cake and the frosting. I am STILL further challenged by a kitchen with no lighting. My electrician did finally show up and we resolved issues in 4 of the 5 rooms, and parts for the kitchen fixture are on order, so you won’t have to hear me complain for much longer. And I have been further FURTHER challenged by having the flu or whatever you call it when you have 102 fever and ache so bad you can’t get out of bed. I only had energy to make one component at a time, starting on Wednesday, and I just now completed the cake.

I began by making the caramel syrup, the key ingredient in both the cake and frosting, and the hardest part of the challenge for me. It took me a couple of tries to get it the right consistency.

Here’s what you start with: 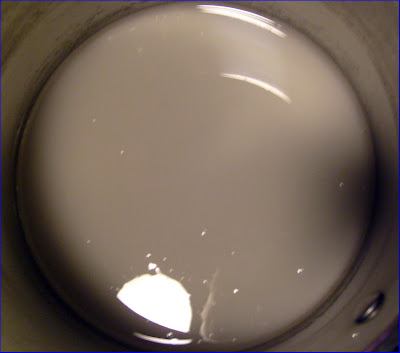 Here’s what I ended up with the first time: 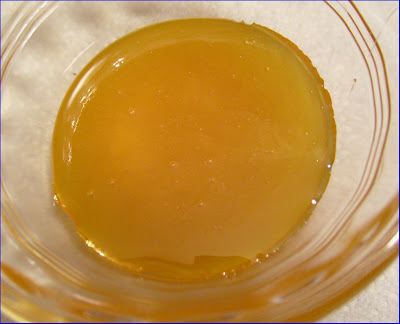 This syrup hardened too and I had to cheat and add milk to it to make it pourable. I also added in vanilla extract because it tasted bad as just sugar and water.

The cake recipe was easily made vegan. I used EnerG egg replacer and almond milk to substitute the eggs and milk. I figured many bakers would opt to make cupcakes with their batter instead of the 9-inch round, so I chose to make two 6-inch round layers. Interestingly, the recipe stated to place the pan on a baking sheet, so that’s what I did. 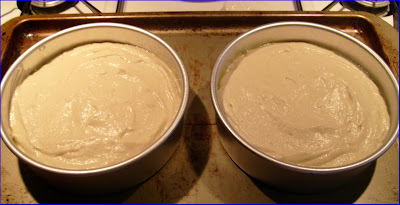 You can tell by the way the edges baked that my pans were a little small. Why don’t two 6-inch pans substitute for one 9-inch pan? Oh, well, nothing a little frosting won’t hide. 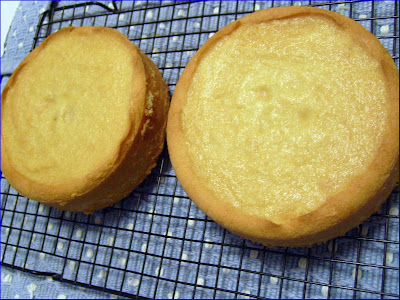 The frosting was also easily made vegan. I made a half recipe because I don’t like my sweets too sweet. Earth Balance browned just fine, and I used coconut milk for cream. Ready to make frosting – syrup, browned EB, and coconut milk: 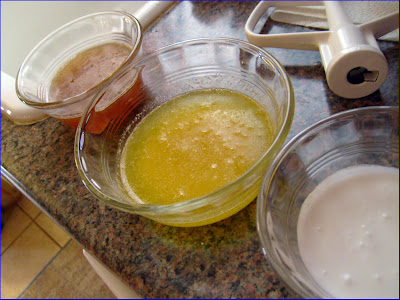 I haven’t tasted the cake yet, but here’s what will be served after Sunday dinner. I thought some toasted pecans would help balance out the sweetness. And a frosting shot is available if anyone wants more frosting. This cake is nearly as tall as it is wide! 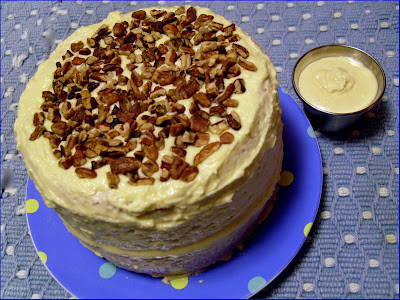 I’ll take a shot of a slice tomorrow and then let you know how it tastes.

Thanks to this month’s host, Dolores, and co-hosts, Alex, Jenny, and Natalie. Another fun challenge!
Time for more Tylenol and another nap.....
Posted by aTxVegn at 7:09 PM

Can't wait to read how you like the cake - it certainly looks like it will be absolutely delicious!! :-)

I'm glad your lighting issues are getting resolved but I'm sorry to hear you're not feeling well. I hope you feel better. I can't wait to see how the cake tastes (it looks pretty).

Mmm, cake. I hope it tastes as good at it looks!

It's so beautiful! It sounds so delicious too, you had me at coconut milk!!

I can't believe you created that masterpiece with 102 degree fever! I hope you feel better soon!

hello, i will take that frosting shot! and your cake looks beautiful.

I'm sorry you are so sick! Lousy, stupid flu!!

Can't wait to hear what you think of the cake! (Mine was SWEEEEEEEEET . . . almost cloyingly so. Yikes!)

I made the optional caramels tonight -- a little late, but still delicious!

So sorry you have not only had electricity problems, but sick too! I hope you are finally on the mend. Your cake is perfect. I am not eating the cake, but DH is enjoying it. Brandie tried a tiny bite and said Good, but the frosting is really sweet. Good idea using coconut milk. I used silk FRench Vanilla. I wonder what December will bring?

Oooh your cake turned out so pretty! I'm sure ti will taste as delicious as it looks :)

I'm so sorry your sicky! I hope you can get yourself in bed and just sleep it off. Your cake looks bakery-worthy!

Wow, check this out: http://www.lwsfreedom.com/id/greentitan

What a fantastic cake! The result looks like a festive torte.

The cake turned out just gorgeous--looking forward to the interior shot :)

Sorry you've been under the weather--what a trooper, though, baking anyway!

That is true daring baking! For your next challenge you'll have to step it up and use only a campfire. Good work with the electricity challenges.

I keep having challenges with caramel too. I have been trying to make a good syrup to go with my latest ice cream project but it's been a challenge.

Looks great! I'm sure it will taste wonderful as well. I don't like super sweet frosting either.. I remember all those disgusting lard frostings that people used to use.. bleh...

If it tastes half as good as it looks, I'm sure it's delicious! Great work on this challenge, and I think your smaller layers look perfectly fine, too.

i hope you're feeling better!

the cake looks divine - i can't wait to hear how it is! i bet it's super tasty! wahooooooooooo!

Caramel is quite finicky, looks like your second try was successful though. And what a trooper you are to do this when you're sick! Hope you're feeling much much better.

great job veganizing this!!!! that is sometimes hard, but you pulled it off nicely.

mmm, the crumb on your cake looks way better than mine, but I bet it was just as delicious, that cake is so good. :P~~~