It’s still summer here, which means local farmers are still harvesting tomatoes, sweet peppers in all colors, and onions. The only fall crop producing now is greens, lovely kale and crisp collards. So this is what I received in my CSA box this past weekend, and this is what Sunday dinner was built on. I turned to Deborah Madison’s Local Flavors for two tasty recipes.

First, Roasted Peppers and Tomatoes Baked with Herbs and Capers. 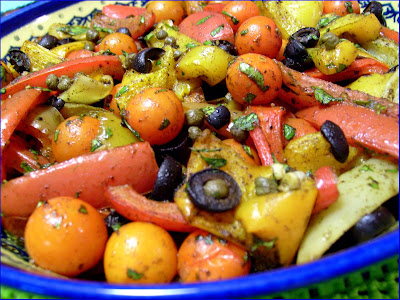 This recipe called for roasting the peppers, then baking them with the tomatoes and serving the dish cool as a salad. The herbs used were parsley and marjoram. I don’t use marjoram or capers very often, but this was a light, lovely dish we all enjoyed. And isn’t it beautiful! 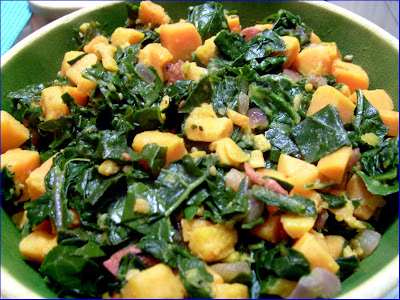 (They were still a little steamy in this picture.) I used my collards and kale for this recipe, along with two big sweet potatoes. It is flavored with onions and garlic, and a few fake bacon pieces for a nice smoky taste.


I also made Vegan Haggis! Bex commented on my post featuring Vegan YumYum’s Delicata Squash Bisque that she wasn’t so much a fan of squash, but thought she might try this recipe. I told her if she did, I would try the Haggis she made, which she got from Mo. She did make the bisque (and liked it), so I made the Haggis.

It’s a shame to call this Haggis, because it’s really very delicious. It’s got beans, nuts, veggies, and oats in it, so why wouldn’t be tasty? Now mine didn’t bake up too well; it stayed pretty mushy, but we ate it because it was good. Later I took a cold slice and dryfried it in a nonstick pan. This piece I could eat like a slice of toast and it was much more enjoyable. 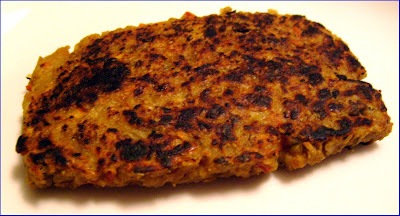 I made some Tomato Herb Bread in the bread machine, which was very good, but I just don’t like the way the loaf looks when it’s baked in the machine. I usually let the machine make the dough, then I put it in a loaf pan and bake it in the oven. Anyway, here’s the little loaf. Tastes great, looks odd. 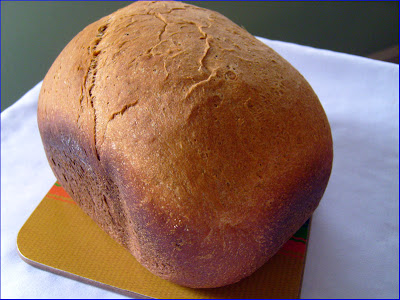 And here’s my plate of local flavors, along with a slice of bread and some mushy haggis. 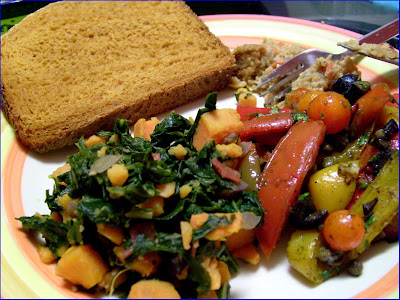 For dessert we had ED&BV Gluten Be Gone Homestyle Chocolate Chip Cookies. 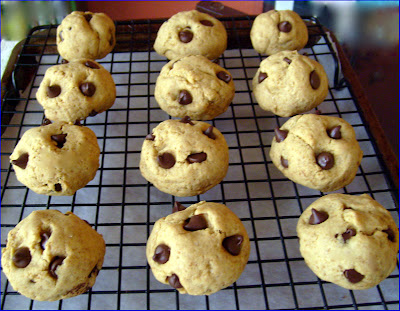 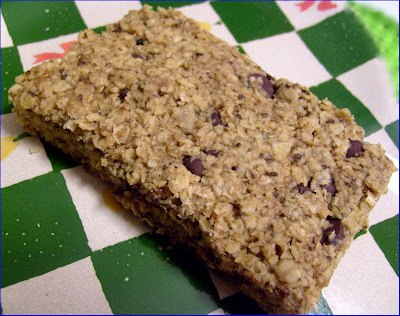 They’re not especially beautiful, but you can see they turned out just as promised. And they are so delicious, like a big bowl of oatmeal with a cup of coffee, and a few chocolate chips too. I’ve got quite a few more *must makes* from that little ebook!
Posted by aTxVegn at 6:56 PM

There is nothing better than homemade bread...

Your food always makes me want to come for dinner!

I'm loving those collards with potatoes, the gluten be gone cookies and that oatmeal bar though. Mmmm.

all the foods look so fresh and lovely! also the bread

isn't it awful how difficult it is for summer to end sometimes? it's finally over here, but jeebus. good luck to you!

Everything looks so delicious - as always, but I must say, I am jealous of your bit of lingering summer!

wow, you've been busy! first of all, the top 2 veggie dishes look amazing, and i wish i could still get sweet peppers at my farmers market to make that yummy pepper/tomato/caper thing! lucky you! also, i had vegan haggis when i was in scotland (although it was packaged) and it was fricking delicious. kind of like.. a really yummy stuffing. but better. i didn't know there was a recipe floating around! i must try it. and that bread! the cookies! the bars! you're my food inspiration right now. i feel like i should leave work and go to my kitchen and start baking, asap. actually... i'd love to do that, haha!

Wow-what an amazing array of foods! I used to love haggis, and yours sounds soooo good. I agree about bread machines, too--somehow, I think it would taste better the "traditional" shape! I've yet to try the recipes from Hannah's ebook, but must get to it this weekend! :)

So jealous... Feels like summer ended ages ago here!

But I'm thrilled to you're enjoying the ebook so far!

Those vegetables look so good!

I am glad you tried veggie haggis and liked it! It is good stuffed in mushrooms and served with wholegrain mustard. Yum!

Actually I think that bread looks su cute and plump. Can bread be cute?
Oh the cookies! The cookies!!

I'm so jealous about your still-intact summer and abundant produce. It all looks so lovely. I swear you are the most prolific cook I know.

jealousface on all the summer produce! how awesome is that! you're so lucky! that's one plate of colorful gloriousness, Diann! ooooooooo - yay!

i think the energy bars look darn tasty, and the bread, too! they both sounds sooo super good!

enjoy all those aewsome veggies while you still can! :)

Texas like South Africa appears to be lucky and have most veggies all year round as the winters not quite so harsh.

Love the colors of the roasted veg and I know how tasty they must have been. Your bread looks really terrific.

I knew you'd appreciate the broccoli, my fellow green-veggie aficionado.

The food looks wonderful - so fresh and nourishing.

I use my bread machine like you do. (At least I did until it died recently)I make dough in it and bake it on a stone in the oven. Now I'm deciding if I should replace it. I've been doing a lot with no-knead dough lately. Still, that machine came in handy.

I also use my bread machine only for kneading, but it's a great help.

Everything looks so yummy! I actually like the way the bread looks all short and squat like that!
Also I never think about using sweet potatoes that way. Looks great.

I am with you on the bread machine bread. I am not crazy how my bread machine makes it so I usually just let it do the work and my oven the cooking. I have to say that your bread looks really good from a bread machine. Mine usually turns into some kind of alien. :o) Cool cooking with CSA. We are on a waiting list for our local CSA. I am hoping by the first of the year we will get a spot. Well, I have to admit that even being off sugar for 41 days your cookies would be a possible down fall for me. They look so perfect!

dang, Diann!
You've got so many great things in this post. Most of all I wanted to comment on the recipes from Local Flavors. I just bought that book recently, so I'm happy to to see a couple more recipes from it.

Oh my!!!
You are just amazing - all that lovely food! You've made me drool over my keyboard lol!
Iim gonna have a go at the Haggis recipe - I've only ever tried the packaged one made by McSweens - but it was GORGEOUS!
YAY! for still being summer - a lot of people would call the weather here in Spain summer at the moment, it is equal to an English June - but when you acclimatise it's really not.