I worked really hard on a Sunday dinner especially for my son, but he couldn’t make it for dinner. I don’t even know how these meat pies taste, but I chronicled the preparation so I’m posting it anyway!

There’s a local restaurant called Boomerang’s that makes traditional Aussie Meat Pies and also offers several vegetarian options, including one with tofu (but also with cheese). Since I’m on an Indian food kick at the moment, the Curry Veggie Pie appealed to me. I contacted the owner and asked if he offered any vegan pies. He said no. I told him I would be making my own vegan version and asked about the proper crust. He shared, and then asked me how to make a vegan pie crust. So maybe I’ll see a vegan option on his menu soon!

I began by making my filling with a package of Lightlife veggie crumbles, onions, sweet peppers (because I have so many), a little tomato sauce, and lots of vegan Worcestershire sauce. I also made the bottom crust, which is a standard 9-inch crust. The top crust is puff pastry. I would make four pies in my giant muffin tins. The tins are 4 inches in diameter, so I used a 6 inch bowl to cut my pastry. 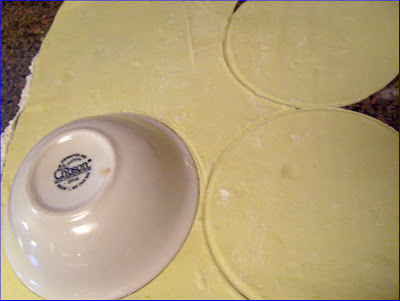 After pressing in the bottom crust, I added the filling. 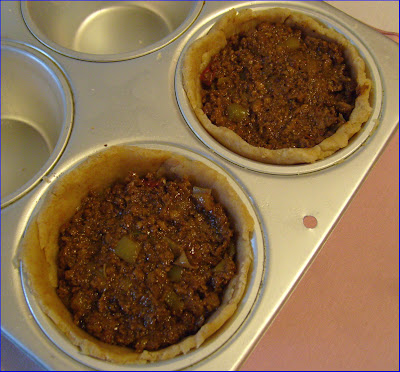 Then I added the top crust and sealed it. 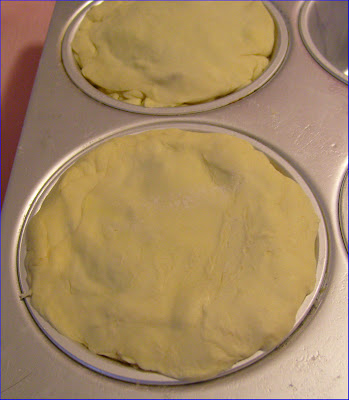 I cut an X in the top crust before baking them. They baked for 10 minutes at 400, then I reduced the temp to 350 and baked another 20 minutes. All done. 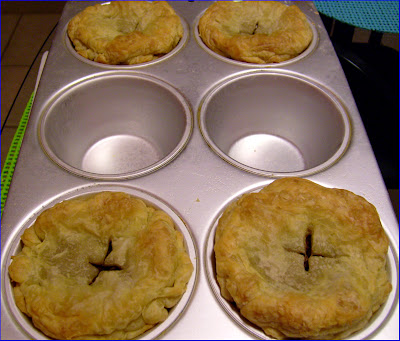 While they were cooling, I began to wonder how I was going to get them out! I couldn’t just pull them out for fear of taking off the top crust. I was able to tip the pan and grab them as they slid out – whew! 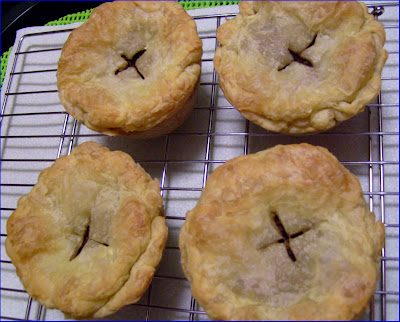 I thought they turned out beautifully. Look at that crust! 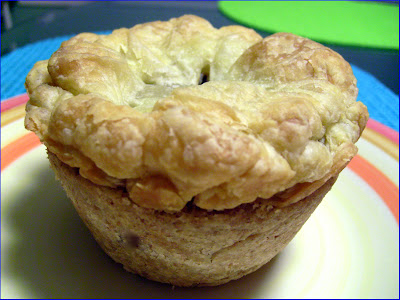 I was DYING to know if you could really just pick them up and bite into them without the filling running out everywhere. But I didn’t take a bite or cut into it. I did peek though. 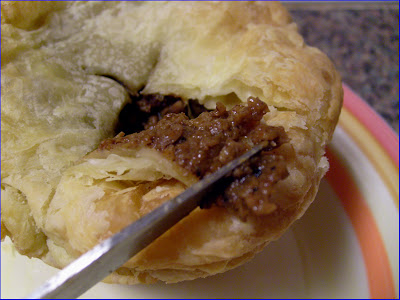 They are now in the freezer. I know the puff pastry won’t be any good after it’s thawed. Oh, well.
You MUST have mashers with the pies, so I made that too. I had one giant sweet potato and one smallish white potato, so I cooked both of those. Here are my Bicolor Mashers which I ate with some greens. I also made gravy, for the pies and mashers, and Celine’s Whole Wheat Rolls. Celine, the rolls turned out perfect! 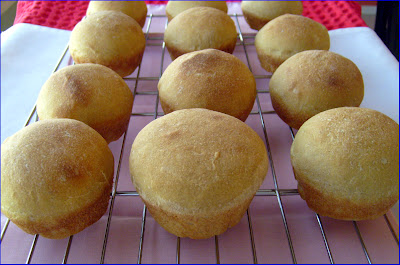 And now for the fabulous brownies! This recipe is the very first one I gave Chase, along with the ingredients and a muffin pan. I didn’t eat one back then, but he said they were amazing, so I thought they would be an easy treat for the end of this meal. I got this recipe from Hungry Girl, by the way. Here are the ingredients. 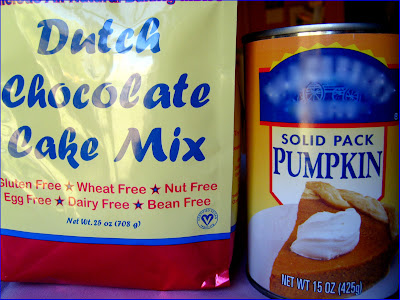 That’s it! Chocolate cake mix and pumpkin. I used a gluten free mix Amey gave me. I removed about a cup of the mix because I think the Betty Crocker mixes are 18 ounces and my mix was 25 ounces. Anyway, all you do is stir stir stir until it’s mixed, resisting the urge to add water because it’s seems like it will never come together, then put into your muffin tins and bake at 400 degrees for 20 minutes. I did add a little vanilla because I think it helps take away the box mix taste. But still, that’s only 3 ingredients. So here’s how they look when they’re done. 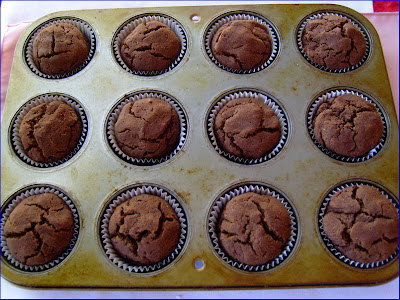 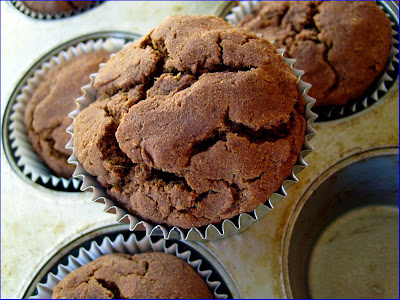 And here’s the inside, fudgy, but fully cooked. They are wonderful. They definitely satisfy a chocolate craving. 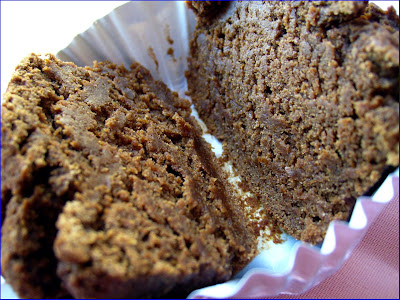 Besides having to eat alone on Sunday evening, I had to find/make room in the freezer for all these leftovers. 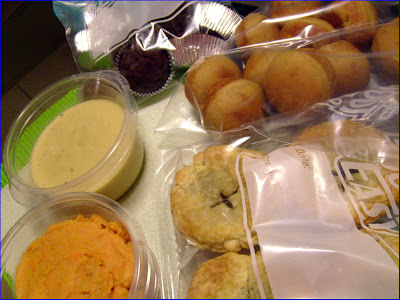 Too bad Chad couldn't make it for Sunday dinner; but hooray for STILL creating phenomenal treats!! :-)

Those pies look fantastic! I'm not sure I'd have the patience to do the crust, filling, topping, etc. But of course I'd be happy to eat them once done :) And I LOVE the idea of 2 (or 3) ingredient brownies!

Wow I just had dinner but I am hungry again looking at all your pics. Good job!

I was actually wanting to make a veggie meat pie or empanada all day today! Unfortunately, the shortening my mom got me was full of transfat so I guess I'm gonna have to wait a while until I find a non-hydrogenated one.

nice!
The pies look great.
I"m sorry you had to eat alone though. :( And that you had to freeze all your leftovers. I can hardly fit anything in my poor freezer!

And, so glad you liked the brownie mix! Hoorah!

I feel so inspired to make some 'meat' pies - a variation on these has been a holiday family tradition for generations, but I'd never really thought of veganizing it. Thanks Diann!

those "meat" pies look amazing, i want to try that now! and the brownies, i have seen that recipe a lot but have been skeptical because even though i love pumpkin, i don't want to taste it in a brownie.

that stinks you had to eat alone... i totally would have eaten at LEAST one of those pies (and that's why i'm on a diet haha). the rest of the meal sounds fabulous as well. and those brownies! so simple. i will definitely be trying that out.

I actually tried the curry veggie pie from Boomerang's over the weekend! I bought it frozen from Central Market and heated it in the oven. It was fairly bland and the filling did not remind me of curry or any other sort of Indian flavor. I love the concept of a hand-held pie, though. Thanks for showing how to make them!

I've also made cookies from cake mix and pumpkin. If there is a good vegan spice cake mix, I'd recommend mixing it with pumpkin and throwing in some chocolate chunks. It was a great combo!

Everything here looks awesome as usual...I am intrigued by the idea of making brownies with pumpkin in them...the pies look yum...

Yikes. Such restraint not to eat even half of one of those pies. Between the pies and the brownies, I can just imagine the fragrance of your kitchen. Too bad your son couldn't make it. I know how disappointing that is.

The crust is so beautiful - I never make crust like that.

Sarah, thanks for your comment. My mom bought a pie from CM too and she said the same thing - bland and not good. Too bad - I enjoyed visiting with the nice owner. And I was thinking like you on the spice cake mix because I love pumpkin flavor. What I made only tasted like chocolate. These are just a little too easy to make, if you know what I mean!

aTxVegn said...
This comment has been removed by the author.
11:50 AM

oh man, sorry Chase couldn't make it for dinner - it looks soo awesome, Diann! that's too cool that the owner told you about the crust! (that would be awesome if he started some vegan options) and the crust looks PERFECT! oh my gosh - just perfect! i love the bi-colored mashers, too! mmmmmmmm! the rolls, the brownies - mmmmmm! it's all glorious, indeed!

I'm completely taken with the 2 ingredient brownies!! You bet I'll be trying those, they look great!

Those little pies look so pretty!

They are the cutest little pies. Like you, I make good use of my freezer, but it's about time to go "shopping" in my freezer and eat up some of the leftovers.

Like your ingredients for curry veggie pie… they are lighter & can be taken alsong with your diet plan.

gorgeous pies! And you have insane willpower, woman, for not biting right into one! I know at least one would have a big bite-mark in it, if I were around. :D

Hey babe! I am awarding you a BUTTERFLY AWARD!
Because You have one of the coolest blogs I know!
Go back to my blog to see the rules :)

I've had that brownie recipe before too-- soooo yummy!

The veggie meat pies are beautiful, and they look so tasty!
YAY for yummy 2 ingredient brownies!

oh my god, those pies!!! that is my kind of food! sorry you had to eat alone on sunday. your son definitely missed out on a piping hot curry pie. hopefully the leftovers still came out good. :)

i love those little pies!!!! how cute are they. i like eating small meals, so these would be perfect for my "snack size" lifestyle. i think that's why i love muffins so much haha

Oh my! I want one of those pies! Actually, I don't think one will be enough. They look so lovely!

Hi! my first time to your blog and I'm so glad I found it! you have some delicous vegetarian recipes here!

btw, I'm hosting a Vegetarian Thanksgiving recipe event, and would love if you could send in an entry or two!:)

those pies are awesome! you're so talented and creative -- i want to move in. can i? i dont mind construction!

Those brownies look really good! And only 2 or 3 ingredients?!