One day when Chase was about 7 years old, I went to pick him up from afterschool care and his teacher stopped me and said, “Well, Chase was sure full of beans today!” I had no idea what that meant, but was certain it was something gross and obnoxious, so I said, “I’m so sorry.” I later learned that it just meant he was acting silly – whew! Our Sunday night dinner was not silly, but it was literally full of beans.

I actually made two very filling entrees. The days are so hectic lately and I wanted to have leftovers for me and plenty for Chase to take home too. I also got to test some more yummy Urban Vegan recipes. I still don’t have kitchen lighting, so once again I made most of this dinner during daylight and reheated it just before serving. 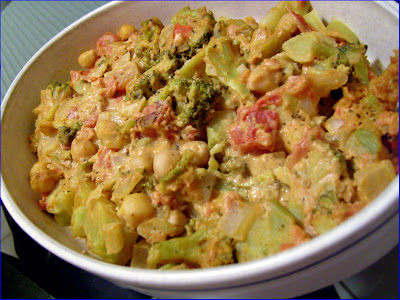 As you can see, it has broccoli and chickpeas, two of our favorite ingredients, in a cashew sauce. Due to tester protocol, I can only say mmmmmmmmmmmmm! I served it over baked brown rice. I have this one bag of rice I’m using up that will only cook properly if it’s baked - I have no idea why. 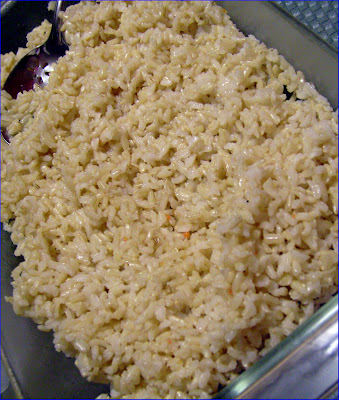 The second entrée was lasagna! I made Black and White Bean Lasagna in a giant to go container for Chase to take home. 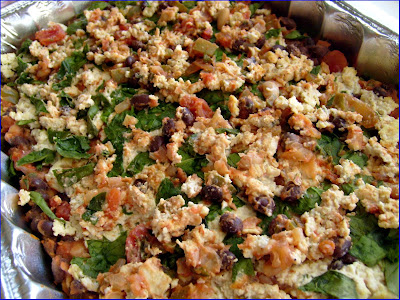 It is full of wheat and soy so I didn’t taste it after it was baked, but I did taste the sauce and the cheese mixture while preparing it and they were good. And Chase loved it. It has just a bit of cilantro in it, but otherwise it’s just like regular Italian lasagna. I made the sauce with mashed white beans, whole black beans, and tomato sauce, and onions and peppers and garlic, the usual tomato sauce ingredients. Then I made a cheese layer with tofu ricotta, tofutti cream cheese, a little tofutti sour cream, and some nooch and other seasonings. I added in a layer of fresh spinach too. I have a recipe if anyone wants it. I couldn’t tell which of the entrees Chase liked best. It was probably a tie. 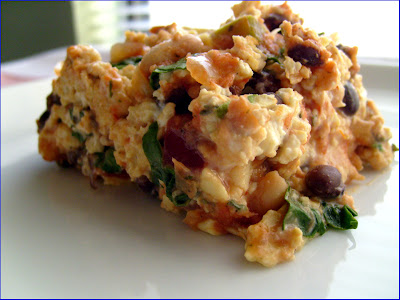 I had a recipe for Black Bean, Corn, and Cranberry Relish I had saved from a 1998 Better Homes & Gardens Holiday Cooking magazine. It looked so pretty in the magazine I couldn’t wait to make it. 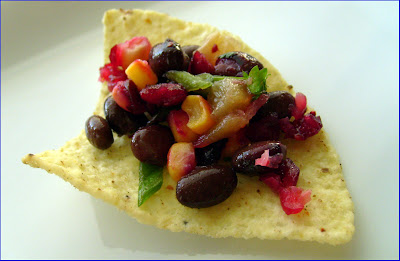 It’s good, but I would like to tweak with the seasonings a little to get it perfect.

I also made up some broccoli slaw. I thought it would be nice to have one food fresh from the oven for dinner, so I decided to make some phyllo wraps with the slaw. I hadn’t worked with phyllo in a while. I should have moved the wraps to the plate with a spatula and not my hands. 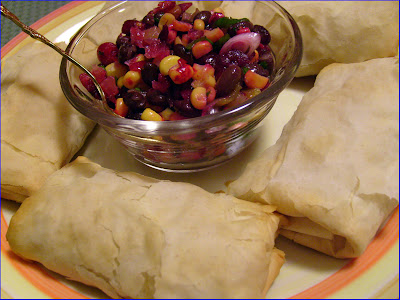 I may have missed out on the lasagna, but I got plenty to eat. I got the leftover broccoli slaw. 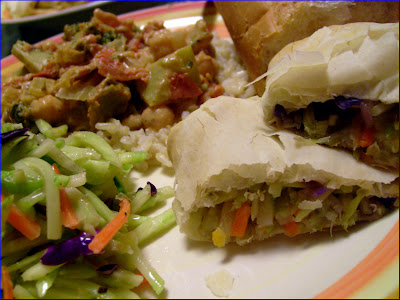 And I had room for dessert! This is a piece of Urban Vegan’s Choco Coco Oat Bars – chocolate, coconut, oats – what’s not to love?!! 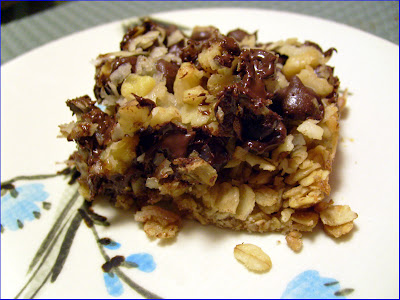 I have a very busy week at work and then I’m off until December 31 – yahoo! I know many of you will be taking finals this week, as will Chase, so study hard, do well, and then look forward to a well deserved break. Everyone else – stay warm!
Posted by aTxVegn at 6:59 PM

I love casseroles, but for some reason I am afraid of making them because they *seem* like they're time-consuming to make. I think I need to get over this fear.

Hope it's warmer in Austin than it is here!!!

Good luck to Chase with his studying!!

Can't believe you still don't have lights!! Yet look at all the amazing creations you've made! Everything looks terrific, esp. that casserole--how weird about the rice!

Oh man, I wish I was eating at your house for this!! It all looks fantastic, especially the curry and the slaw. Yummy stuff!

Julie said...
This comment has been removed by the author.
9:21 PM

I enjoy visiting here now and then. I found you through Edie. I am curious to know if Chase is Vegan too. I know he loves your cooking (and I'm SURE I would too) but I know he's living away from home going to school and just wondered if he eats meat too.

The curry casserole and the black and white bean lasagna look amazing!

The Choco Coco Oat Bars are so chocolaty-gooey on top!

Hi, Julie, and thanks for visiting me. Chase is vegan. In fact, he inspired me to become vegan!

it's good to hear you will be getting a well-deserved break, Diann!

I love it all!!! When I visit my parents (hopefully) next year we need to get together. YOur food is always so perfect! I would lvoe to have your lasagna recipe. Anytime I can incorporate beans into a meal I go for it!

Our favourite expressions were "full of beans", "full of bologna", and "full of condensed monkey milk". When our mum would say that to us we would just crack up!
Enjoy your holiday - time off is such a luxury!

We used to sing this when we were kids:

"Beans, beans, they're good for your heart. The more you eat, the more you fart."

I still think it's funny. Juvenile of me, I guess. But I sure do love beans, and all those beany dishes look fab.

Glad you liked the casserole!

wow! this post is chock full of yummies! that curry casserole looks just scrumptious, as does the lasagna. i have to make a lasagna to take home this weekend as my parents are having a lasagna dinner for my family and, of course, i must bring my own haha... i've never had lasagna with beans! it looks soooo good. and so do the wraps, relish, and oat bars! you are a cooking queen, woman!

wow! this post is chock full of yummies! that curry casserole looks just scrumptious, as does the lasagna. i have to make a lasagna to take home this weekend as my parents are having a lasagna dinner for my family and, of course, i must bring my own haha... i've never had lasagna with beans! it looks soooo good. and so do the wraps, relish, and oat bars! you are a cooking queen, woman!

Haha, there's definitely worse things than being full of beans, in both meanings of the phrase!

I can't wait to try that casserole. Broccoli, chickpeas, and nuts are all foods I LOVE. And those oat bars look so yummy and chocolately.

How funny about being full of beans. The tester recipes both look delicious, as does that bean lasagna! You are always making such colorful, healthy, and interesting dishes!

Hooray for some time off.

Great idea to wrap up the slaw in phyllo. I have had a package of phyllo in my freezer for quite some time now. I really should put it to good use!

Oh, and I meant to say that your lasagna looks too pretty to eat. I'm sure it was extremely decadent with the ricotta, cream cheese and sour cream. Yum!

Hey, I think being full of beans is a good thing -- literally. Especially if they were beans made by you! Being filled up by veggies and beans and lentils is just the best feeling.
I wish I could have sneaked a taste of some of the lasagna you made for Chase. I love broccoli and chickpeas too, and the cashew sauce idea just puts that curry over the top of deliciousness! Yum.

that lasagna looks delicious! (as does everything)..

Everything looks delicious! I've been drooling over the Urban Vegan testers I've been seeing around the blog world. You're so lucky to be testing for her!

your black and white bean lasagna looks so wonderful - i'm dig'n the casserole, too. cashew cream = the best ever! mmmmmm! chickpeas are also my favorite! yay!

that's so strange on the bag of rice being the only one to bake up well. fussy rice! i've never been brave enough to bake my rice. perhaps i need to get over my fear! :)

those oat bars - omg, yuuuuuuuuum! i could eat them all!

Ha, I'm full of beans quite often ... but not in a silly way. More like a gassy way. But that's a whole different story.

The Curry Cashew casserole looks so amazing. I love a good casserole. And is the white bean lasagna your own recipe? You said you had the recipe if anyone wanted it...and um, I'd love to have it. It looks freakin' amazing!

All your eats look lovely, as always, but those bars... Aah! I'll definitely need to have that cookbook once it is released...

Everything looks great! I could sure go for a choco oat bar right about now. :)

I love that story about Chase - how cute!

And I love all of that fantastic looking food, too. I'm a huge fan of beans, regardless of that whole "musical fruit" thing :)

Wow, all of that food is making me sooo hungry. It looks so delicious. Beans are definitely one of my favorites.

Looks wonderful! I really do love beans. Even before I went vegan and I was a bean kinda gal.

I've actually tried that casserole before (I think). It required the use of cashew butter and it was gorgeous!

That's so awesome that you put cilantro on the lasagne :D

That lasagna looks so so good! I think it's about time I made so lasagna! And I just love cilantro, I think my boyfriend would be well happy with that!

I'll take a pound of the casserole and the lasagna each! They looks so perfectly delicious.
In Germany we say that someone has "Erbsen im Hintern" (peas in his bum), when someone is acting silly. And we call chickpeas "Kichererbsen" (giggling peas). Why are legumes related to sillyness?

YUM that lasagna looks soooo good and so do those choco oat bars. You've made me hungry!

You're such a great mom to make a whole lasagna for Chase! It looks delicious, too. The curry cashew casserole looks fantastic, I'm very interested in that recipe. And broccoli slaw! I wanted to make broccoli slaw for Christmas but they don't seem to sell it around these parts.

It does look wonderful for kids of all ages. Thanks for sharing with Urban Vegan. I know my grandson will love eating this...as long as he can use his fingers.