Hey, everybody! I had a great visit with my sister and her family in Alabama. My nephews are 10- and 7-year-old very busy boys, and completely delightful. My sister and I shopped and cooked and spent a good deal of time going through and organizing her recipes, and gathering recipes for our family cookbook.

Some dinners we made that I didn’t take a picture of and are among my favorites were cabbage and mushrooms, everything stirfry, and Three Sisters Stew. My sister enjoyed them as much as I did. The Three Sisters Stew is from 150 Vegan Favorites and I have a picture I took two years ago to show you. It is made with pumpkin, corn, and beans and this particular recipe is really delicious. 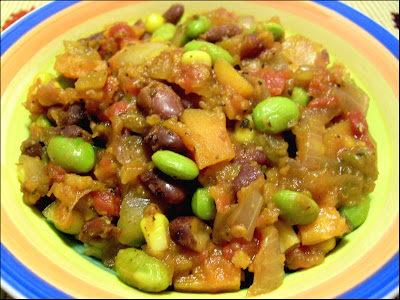 We also tried to make my grandma’s yeasted dinner rolls. Grandma didn’t use a recipe, she just made them, and they were killer. Not vegan (they have egg), but killer. We didn’t get it quite right. They literally took all day to make and my sister says she will never attempt them again. I really want to try to make them without the egg and at a lower oven temp. 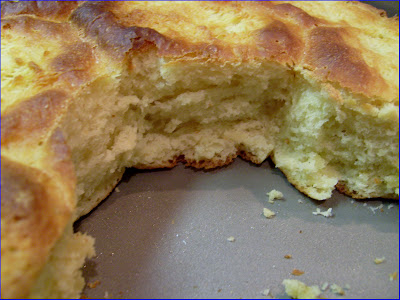 We did make my Beer Bread, which was a huge hit! Thank you to Claudia who left me a comment that her family enjoyed this bread too. Here’s the picture from the last post. 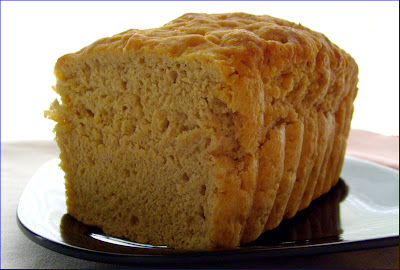 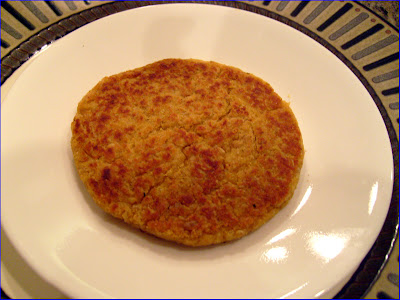 And Zucchini Bread, which was the best I’ve ever had. My sister said so too. (Don’t worry Dynise, I didn’t give her the recipes!) It doesn’t look real pretty due to a mistake on my part, but boy is it delicious. 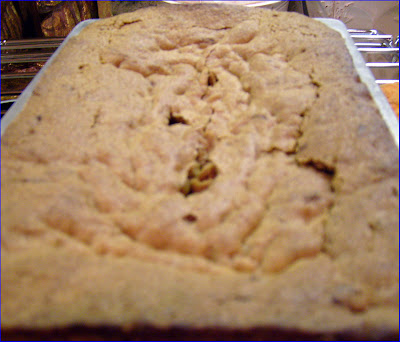 We came across a recipe my mom had given my sister for Five Minute Chocolate Cake. She had never made it, so I said if we could make a vegan version, I was willing to try it. You mix up the batter in a big mug. I called it Cup o’ Cake. 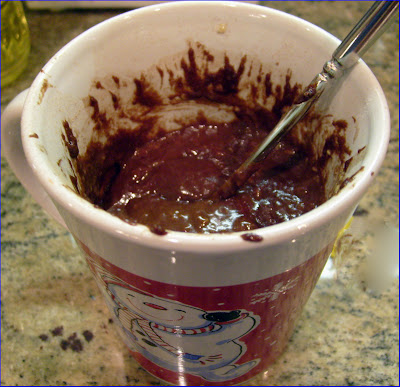 You bake it in the microwave for 3 minutes. 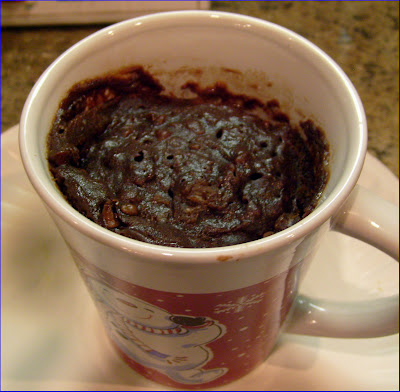 Let it cool, then spoon it out. 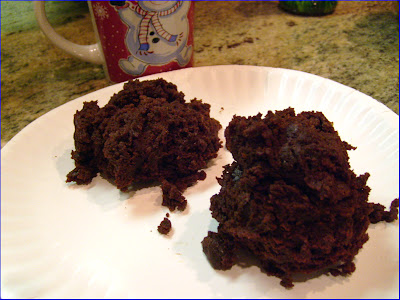 We both said we hoped it wasn’t very good because chocolate cake ready in 5 minutes is dangerous. Thankfully, it tasted like microwave cake. Now it will cure a chocolate craving, especially if you put some good frosting on it. You know you want to try it too, so here’s the recipe:


I was able to bring back a few ingredients I haven’t seen in Austin. Oh, our governor was on my plane from Dallas to Austin! 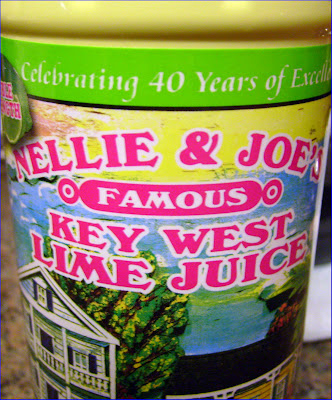 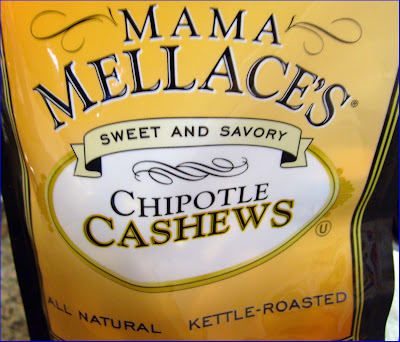 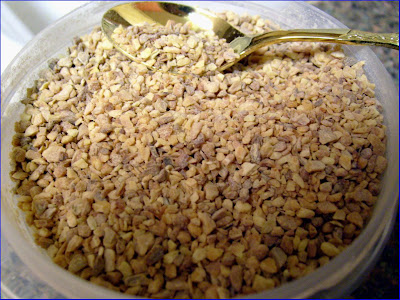 This is roasted minced garlic and I am completely addicted. I cook with them, and sprinkle them on top of my salads and steamed veggies - yum, yum, yum!

One other fun thing that happened while I was gone. Chase’s car kicked it before Christmas, so before I left for Alabama we ordered him a scooter! He got it while I was away and came by to show it to me last night. My camera was about out of batteries, but here’s a shot of him on it. He is so happy! 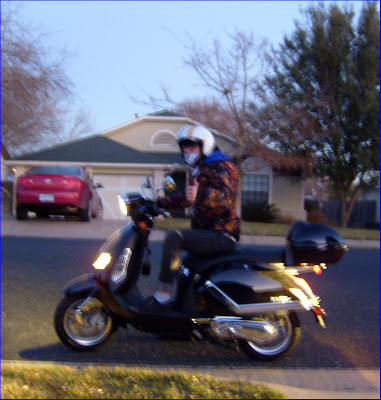 I’m trying to catch up on all of your posts as fast as I can!
Posted by aTxVegn at 6:32 PM


**Just as a heads up: I will not be able to comment on blogs as often now, during this semester, due to work overload (I'm stressed already) - PLEASE know that I'm still loyally reading, but just won't have time to comment. I hope you understand!!

Microwave brownies are my faaaaavorite! I'm sure you've tried the NoPudge brand of yogurt brownies, but these look equally delicious :)

Um, sorry, I lost my train of thought. I can't seem to focus on anything else but that gorgeous cake-in-a-cup!

Welcome back, sounds like you had a great trip!!

I've been meaning to make a vegan version of that mug cake, but something just hasn't made actually DO it. I'm glad to hear it just sounds like microwaved cake!

Welcome back! Yummy overload to enjoy once again :D And cake in a cup? My best dream and worst nightmare rolled into one (worst nightmare only because now I've no doubt I will be making cake all too often :P)

I think it's a good thing I don't have a microwave or I'd be having microwave cake every day!!

sounds like you had a great time cooking up a storm!

I'm so glad you had such a wonderful time! I love to see sisters cooking & baking together - that's fun! There's just too much deliciousness in this post, Diann! I don't know where to start!

glad you're back - and so happyfaced that you had so much fun, too! baking, cooking, organizing recipes, eating yummy foods and getting to spend lots of time with your sister rocks! hooray!

very cool on the scooter for Chase, and i'm loving that roasted minced garlic! sounds so good! how cool that the governor was on your plane, too! :)

glad you had a nice trip and also glad to have you back!

It sounds like you had a fabulous time and some gorgeous food! I think I may have to try that cake!

Welcome back and so glad you had a wonderful time. I made that cake in a cup last week for DH and he too said it tasted like microwaved rubber. After putting it in my nutrition counter and told him the outcome he said even if it tasted good that would be out. It was over 850 calories and 50 grams of fat! Ahhhhhhhhhhhhh! I am grateful I did not try it. Staying away from sugar is a very good thing. :o)

Congrats Chase on your new wheels!

Love the scooter! How great that you and you and your sister are putting together family recipes!

Great lookin' beer bread! and holy cow, a cup of cake?! I'm wishing I had a microwave right now!

A family cookbook sounds like so much fun. My family doesn't really have tried and true recipes that have been passed down from generation to generation. My mom made a few things that were family favorites and I've veganized a couple but that wouldn't make for a very big cookbook (or even a zine). :)

I love Nellie and Joe's Key Lime Juice. It's really terrific. That roasted miced garlic does sound addictive. I wonder if I can find it here.

Those tester recipes are driving me crazy.

I don't have a microwave so I'm safe on the 5-minute cake, but I did fall for the beer bread (we really liked it) and the chocolate cake from your last post! That one is dangerous.

I just heard about chocolate cake in a cup from friends at work! But theirs wasn't vegan. Sounds like a really nice visit for you.

The dinner rolls do look good...

Chocolate dessert in 5 minutes could definitely be dangerous!

Chocolate Cake in 5 mins!!!
Verrrry dangerous.
:)
All those foods look yummy and it sounds like you had a GREAT time.
Happy New year and here's wishing you health and happiness for 2009 and a year filled with lots of love and laughter.
xx

thank you for adding me to your blogroll, i don't know when you did, but i just noticed, so thanks. =)

p.s. that cake looks so delicious and easy, i must make it!

All those breads look amazing! And that chickpea burger!

And I've made microwave cake a few times. It is very very dangerous... I try not to give in to the temptation. :)

I am totally loving that 5 minute chocolate cake!! And the beer bread. I've always wanted to make beer bread, but never do b/c I never drink beer so don't have it around the house to use in a loaf!

uhmmm... I want roasted minced garlic! That looks so good! I'm here in New Orleans, for one more day, and hopefully Kittee will take me to the supermarket for some regional ingredients. It's fun to bring home special ingredients, isn't it?

nice to have you back!

Welcome back, Diann!! You guys were eating in style! I love the name of the Three Sisters Stew.

I make microwave cakes on the road too! Now I'm going to start calling them Cup o’ Cake! :)

that microwave cake had better be too good to be true!

Looks like you had a good time in Alabama!

Five minute chocolate cake could be a dangerous thing... so it's a good thing it tasted like it took 5minutes.

Never heard of the Three Sisters before until looking for info on the history of corn and now I see you have also mentioned them as well. Appears I must try out your stew as it will be such a balanced meal.