I made Quiche du Jour and Pan Bagnat, two of Urban Vegan’s test recipes for her upcoming cookbook, to take to Chase’s apartment for dinner tonight with him and his girlfriend. It was a beautiful, warmish day so I was able to take photos before packing up the foods.

The Quiche has onions, peppers, corn, and tomatoes, and a panko topping. 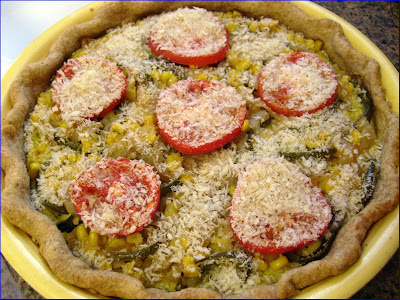 The testers raved and each had a nice big slice like this. 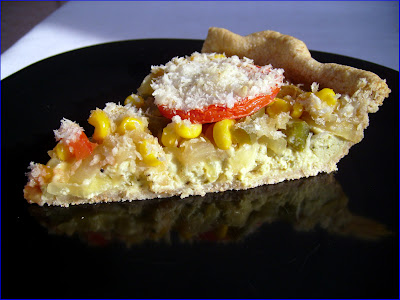 But what they REALLY went crazy for is the Pan Bagnat! 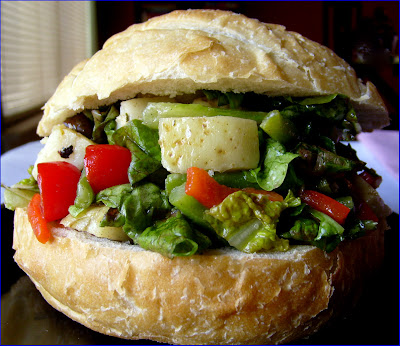 This is a lovely nicoise salad in a small boule round, and the two of them ate this whole thing!
My own contribution to dinner was a Mediterranean style stew of homemade cannelini beans, roasted tomatoes, and zucchini. I took over a big pot and was surprised they had room to eat the stew too. 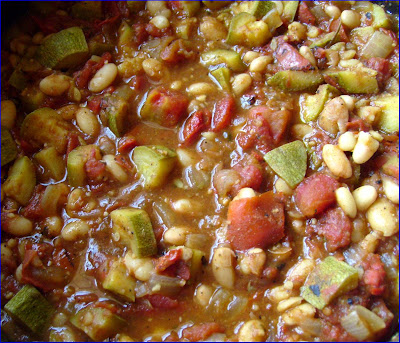 Dessert was another Urban Vegan tester, another winner as well - Coconut Lime Bars that Chase described as ooey, gooey, and chewy with great lime flavor. 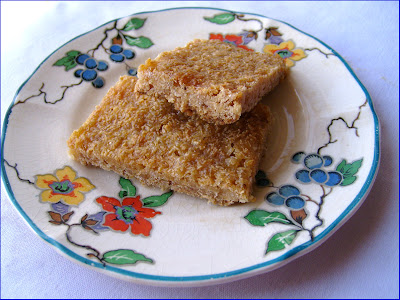 Sorry for such a brief post, but I have to go in to the office tomorrow - no holiday for me. I’ll be back later in the week with a wonderful new product review.
Posted by aTxVegn at 9:29 PM

Oh wow! I want some of that boule! And some of your Mediterranean stew! Yum!

Stop teasing us with these beautiful foods ;p!
Everything looks and sounds so wonderful. I would have eaten a big slice of that quiche, too.

That quiche is amazing! I want to take it off the screen, but my computer's not cooperating with me.

i have a love-hate relationship with tester recipes. i love them because they look so damn good... i hate them because i want the recipe RIGHT NOW! looks so so good....

But your delicious me has at least brightened my morning! Can't wait for UV's cookbook! Now how about one from aTxvegn?

Hang in there with work, Diann!!

what delicious looking tester recipes! mmmmmmm! they're all so pretty! i love your nicoise salad, and the stew looks absolutely awesome! hoooooooooray for some tasty look'n deliciousness!

Wow- I've never seen corn in a quiche before!
I love the sound of those bars! Actually, it all sounds great!

What a lovely dinner! The quiche looks great!

What a great tasty meal, no wonder everyone managed to eat so much.

The book when complete will be amazing from what I have seen of the test recipes.

Your photos are gorgeous!!! Let's see, you could probably get to Portland in time to make me dinner tonight, right? I'm eager for Urban Vegan's cookbook; so many creative recipes!!!

No day off for me either! No fair! My commute to work was quiet and the light rail was empty. Hmpf.

The Quiche looks so tasty and it's gorgeous!

I've never heard of Pan Bagnat before but now I want one! :)

You're such a great recipe tester, you make everything look so enticing!

Yum! All of it looks so good. Chase must live for Sundays!

what a feast! both the dinner tester recipes and your stew sound so delicious. i'm sure they'll keep chase going for at least part of the week! if his appetite is anything like michael's, maybe less, haha... and those bars...ooey, gooey, AND chewy? sounds like something i need, right now!

Coconut and Lime - one of my favorite combinations. Sounds like a delicious feast. One of these days, I promise, I'm going to make it to Austin and you better believe it's going to fall on a Sunday!! ;-)

Lucky you to be testing all that great looking food!

Oh man, everything looks so good! The test recipes and your own! Yummmy :)

Love your Sunday dinners! Everything looks great--lucky you to be a tester!

Key lime and coconut go so well together, I can only imagine how delicious those bars are!

Everything looks really lovely, your Mediterranean stew looks perfect for the cold snowy weather we are having right now :-)

What a lovely meal! Your stew looks really delicious :P

That quiche looks so yummy!