The May Daring Bakers’ challenge was hosted by Linda of make life sweeter! and Courtney of Coco Cooks. They chose Apple Strudel from the recipe book Kaffeehaus: Exquisite Desserts from the Classic Cafés of Vienna, Budapest and Prague by Rick Rodgers.

I had never made Apple Strudel before. It’s just so easy to throw your apples into a pie crust. The challenge in making a strudel is to roll out and stretch the dough until it is paper thin. I didn’t find this challenge too difficult, perhaps because I made a half recipe and my smaller portion of dough was more manageable. I didn’t get creative either, just followed the given recipe, substituting vegan Smart Balance for the butter.

First I made the dough so it could rest for an hour or so. 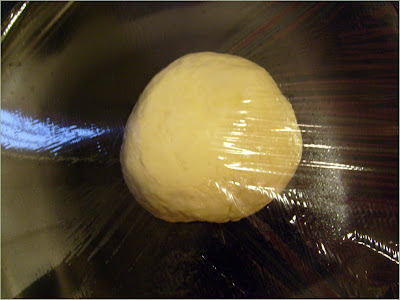 In the meantime I peeled, cored, and sliced 2 large Gala apples and sprinkled them with cinnamon and sugar. 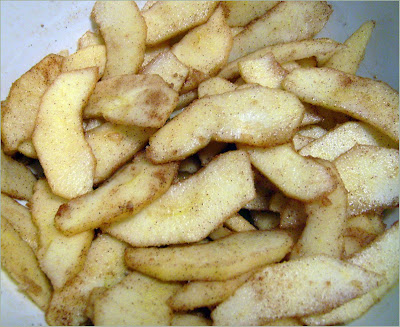 There were also Craisins soaking in brandy to add to the mix, and toasted buttered fresh bread crumbs prepared.

When it was time to roll out the dough, I cleared off the dining room table and got to work. The dough was absolutely beautiful and I found it very easy to roll and stretch with the backs of my hands. We were told holes were okay, an indication of a good stretch. 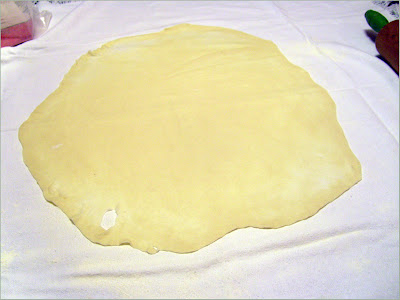 Next the dough was buttered and sprinkled with bread crumbs. Then walnuts were placed at one end, and then the apple mixture spread over the walnuts. The first dough coverage is done by hand, then the rest of the strudel is rolled using the cloth under the dough. Kinda scary, but lots ‘o fun! 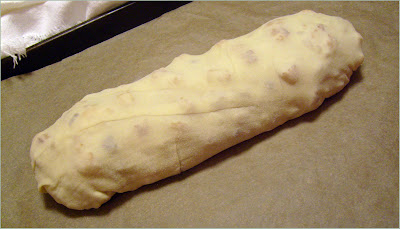 Rats, there’s a wrinkle! But I can’t fix it. I tucked the ends under and it was done. It was easy to transfer to the baking sheet. 30 minutes later… 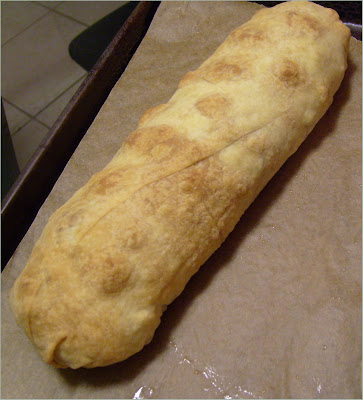 After it cooled I wrapped it in foil and hoped the dough would stay relatively crispy until I could take it to my mom the next day. I cut it right in half for my mom and Chase to share. 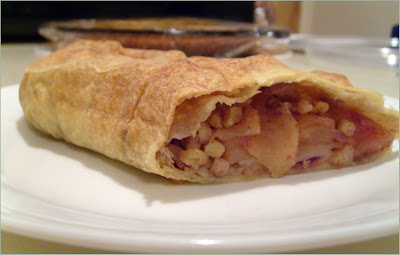 Yay, it still looks nice and flaky! I only ate a pinch of pastry to make sure I had done it right. And now, relying on an old Veggie Girl method, here is my mom’s (completely unbiased) review:

The apple strudel was the best I have ever had! Little old German ladies baking strudel for the County Fair could not have baked strudel this good!!! I loved it! Chase's portion is not going to be long for this world. I cut off half of my piece to eat, then went back for the rest. I put fresh sliced peaches on top - heavenly!

So there you have it. Next time you’re in the mood to bake a pie, bake a strudel instead!

You can find the recipe here. Don’t let the lengthy directions put you off. It only took me 2 hours start to finish. A couple of tips: Increase the amount of cinnamon. Don’t skip the homemade bread crumbs. I only used 3 slices of bread, crusts removed, and cut into big 1/4-inch pieces. They soak up some good buttery flavor and help the layers of dough separate. And I’ll bet a fresh peach strudel would taste amazing.
Posted by aTxVegn at 6:03 PM

That looks so amazing!! Great idea - my dad loves peach pie and cobbler, so I'm sure he's be delighted with a peach strudel! (Especially if it's vegan so I can share it with him!)

Yummy! Reminds me of my German heritage - my great grandmother, great aunt, and grandmother all make fabulous apple strudels.
The only thing I would add is currants.

Wow, that looks so good! Love the flavours.

hooray for another rock'n daring baker's success, Diann! your strudel looks just perfect! looks like you did an excellent job in getting the dough rolled out super thin! yay! i've never considered making a strudel and i think i'm gonna have to! thanks!

It sounds challenging but you did such a great job. Your apple strudel looks so delicious. Wow, it took 2 hrs for you to make it but I think it's really worth it because your mom & your son enjoyed it so much. =D

I had no idea strudel involved bread crumbs! Looks awesome :)

You did a fabulous job on your strudel. I had to fix some creases in mine too once I finished rolling it.

Mmm, you did beautifully with this challenge, your strudel looks flawless! :)

That looks delicious! I made the apple strudel from the Joy of Vegan Baking for Thanksgiving last year and it was a huge hit. I wish I had some now!

BTW, I so admire your gluten-free willpower!

What a beautiful job you did, Diann! You're so sweet to make treats you can't eat for the people you love!

That is a thing of beauty...and you can't get a beter review from your mom than that!

wow, it looks super beautiful and delicious. the crust looks so delicate and flaky! I'm so impressed that you still love to do all this baking, even though you don't eat it. :)

hope you are doing well!

You know, I've eaten plenty of strudels but have never made one. Yours looks like a sweet success.

So glad it worked out so well! It looks beautiful. And I loved your mom's review--too cute!

OmyGosh!! YOur strudel looks amazingly yummy! You are such a pro!!!

In spite of the fact that many critics comment on ed hardy clothing as nothing but tattoo pattrens, being full of unnecessary and useless things, ed hardy clothes is widely acknowledged that ed hardy shirts draws the most attention of both common young people as well as many Hollywood welcomed stars for its punk rock styles. In fact, in today’s world, many ed hardy t-shirtsdesigns are more or less the same with each othre, and ed hardy mens.
China Wholesale
wholesale from china
buy products wholesale
China Wholesalers