Yesterday, Friday the 13th, was my birthday. After so many birthdays it’s not a day I particularly look forward to or feel the need to celebrate lavishly. And though I don’t look it or always feel like it, I still think I’m 35, so I decided to pooh-pooh all the “old” comments and enjoy this week and the attention.

Tuesday evening was a family joint celebration with my baby brother who had a birthday two weeks ago. We had a wonderful time at Sampaio’s, a Brazilian restaurant, with great food and service. The food was not quite as spicy as I thought or hoped it would be, but everyone enjoyed their dinners and it was presented beautifully. The chef wanted to create special vegan fare for Chase and me. On a side note, to all the people I’ve seen comment that they were hesitant to take pictures of their food at restaurants, you should know that our waitress told me that the chef saw me taking pictures of the food and he was just beaming. So fear not and show us your food!

My salad appetizer was greens and hearts of palm wrapped in a grilled zucchini slice and topped with green olive, tomato, and herb vinaigrette. Terribly clever and so delicious. 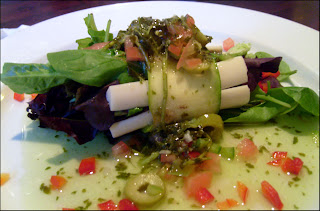 The waitress knew which items were cooked with meat, e.g., the black beans, but I became a little concerned after she asked me twice if vegans could have oil. Chase finally asked her what oil they used, and it was soybean oil. Don’t really get that. Anyway, we were presented with this lovely platter of Shu-shu salad (greens and zucchini in a lettuce cup), grilled veggies topped with the most delicious crispy fried collards, and a roasted red pepper filled with pecan cilantro rice. The chef came out to watch us receive our food, and I gave him a thumbs up. 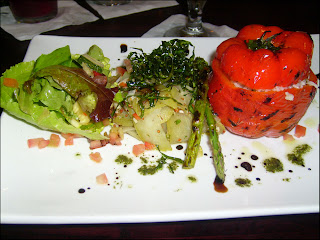 My mom had Oatscreme and vegan mini cupcakes awaiting us for dessert at home, so we didn’t order dessert. But I always ask to hear about them. Along with flan and bread pudding, Sampaio’s serves a chocolate layer cake filled with chocolate mousse and then set afire and presented afterward. I was hoping another patron would order it so I could catch a glimpse of that creation! Here’s a couple of pictures taken at the restaurant. 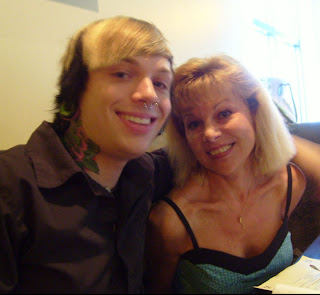 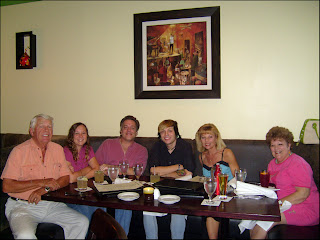 Chase wanted to come visit me Friday after work and bring me a present. I asked him what we would do after that and he said, “Eat?” I knew Friday was going to be extremely busy at work and I would be exhausted, so I planned to pick up the best Falafel sandwiches in town from Marakesh, across the street from my office. On Thursday, I made some things to have with it. 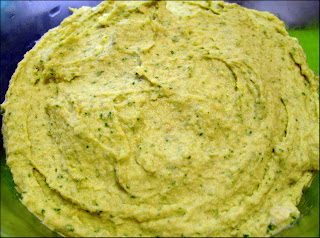 And Lentil Stew with potatoes, carrots, and fresh tomatoes. This turned out really great and was so filling. 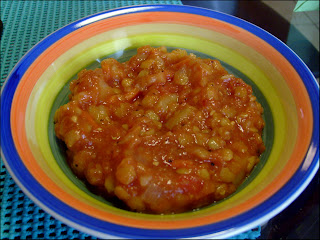 Then on Friday, Chase and Liz and Smokey came over and sent me to my room while they prepared the dinner table. The falafel wraps have 4 huge patties in them. Here they are – bigger than my dinner plates. 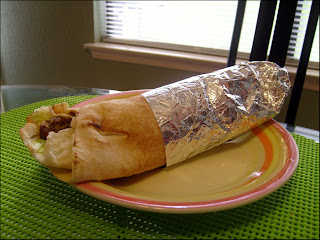 I got some plain patties for myself. 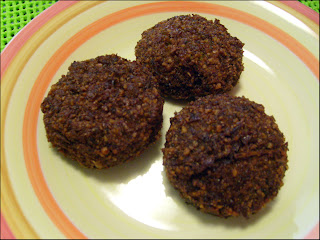 Chase and Liz brought me some lovely flowers, a card, and an ABC Double Chocolate Decadence cookie! 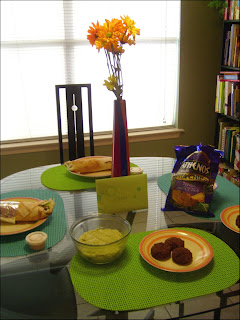 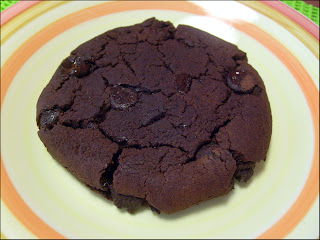 We enjoyed all the food and were very full, and then to my surprise, Chase said they had one more special gift for me. 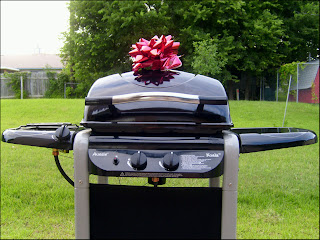 I still can’t believe they bought me a new grill! I’ve been talking about getting one all summer and now I have it. Sadly, the rain is back but we’ve decided we are grilling on Sunday despite the rain.

I guess birthdays aren’t so bad after all.
Posted by aTxVegn at 10:47 AM

Happy birthday again! What a great outing- and such a great gift from Chase and Liz! I can't wait to see what you cook up with your new grill.

happy belated birthday!!! Looks like you had a wonderful celebration. What fun having your birthday on Friday the 13th :0)

Happy Birthday!!! Ahem. A toast to our favorite Texan Vegan - You brighten the blogosphere with your posts and I love reading about your kitchen adventures, so here's to many more fabulous years of family, friends and veggies! (-;

happy belated birthday! it looks like you had such a wonderful one, too! great company and great food = great time, right? that's fabulous that you got a new grill! let me know how you like it - i'm thinking about getting one, too!!

Happy Birthday Diann! You look great! How fun to have your family all together. That is so cool that the chef came out and prepared a meal just for you and Chase.

I love the grill. I told Chuck last week that I would like a grill just for me. I never cook on the family BBQ because they cook meat on it. I need a veggie BBQ!

Chase, you are a very sweet son. I commend you!

happy belated bday to you! I like your idea of throwing spinach in a simple hummus, too. way to get one's greens quota without suffering too much because of it. just kidding, I love my greens.

Wow a grill, that's awesome. I don't think I've ever had a bad birthday in my life, but I guess there are plenty to come ;) Happy belated birthday!

We'll get to see the wondermous grilled creations, I assume? YAY!

That hummus is insane, love it with spinach like that. As well the stew is hearty looking in that beautiful bowl, too!

The table set with that food is really nice, the flowers are such an elegant touch in that pretty vase. Such a super way to celebrate you. Caring family helps make the world easier to deal with...

That grill is STELLAR! Can hardly wait to see what you cook up on that. Tres bien.

You are a wonderful woman, an asset to blogland and to the world of healthy, cruelty-free cooking and eating. Thank you for being you!

Diann, may you have many happy, healthy years ahead. You look gorgeous, too.

Wow! What a fantastic birthday!

Happy Birthday! What a fantastic looking meal you had, that salad is so clever. Nice to hear that it tasted as good as it looks.

Hey - if you can get your hands on some really sour plums, you have to try this sauce, it's delicious on skewers and totally raw: bowl full of plums, pitted + about 10 or 12 cloves garlic, peeled + squirt agave, whiz in blender or food processor. I just have to share it 'cause it's so GOOD!

Happy belated Birthday! It looks like you had a wonderful one! What a wonderful son Chase is for getting you that grill :-D Those falafel wraps look amazing - oh how I love falafel :-)

Happy Happy Belated Birthday Diann!!!!! (I apologize for the late b-day wishes, I haven't been online much lately). That's a lovely pic of you and Chase. Sounds like a wonderful birthday meal out. Woo hoo, a new grill. What a lovely present :)

Happy Happy belated birthday! What a nice birthday dinner- I think the chef was excited to cook for the vegans- made it more interesting for them!

Wishing you all the best!