I planned a simple midweek burgers and fries dinner for our 4th of July food party, but it just kept raining all day – like it has been for the past 3 weeks – ugh! So instead of going shopping or to a movie, I stayed in the kitchen and made way too much food.

I soaked some pinto beans overnight Tuesday to make Crockpot Baked Beans. Aside from using pintos instead of white beans, I basically followed Bazu’s favorite recipe, Julia Child’s Boston Baked Beans. I was making twice as much as Bazu made, so I increased all the spices and added a can of tomato paste and some brown sugar. I didn’t increase the spices quite enough though, and about an hour before dinner added in a cup of spicy bottled barbecue sauce. I wish I hadn’t had to cheat, but these turned out fabulous and are so darn easy! Thanks for posting this recipe, Bazu! 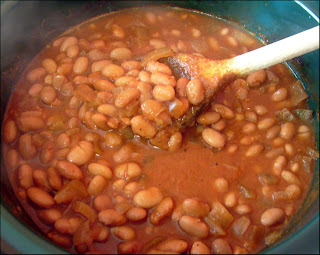 Kate’s Black Bean Burgers were definitely on the menu. I looked at her recipe and I also looked at Sheree’s version. I used Kate’s ingredients and used Sheree’s additional ingredients of extra garlic, veggie broth, and flax seed meal, and her “everything into the food processor” instructions. I also added in a little grated carrot for color, and used one cup of oat flour instead of wheat germ to make them wheat free. I made six large patties. 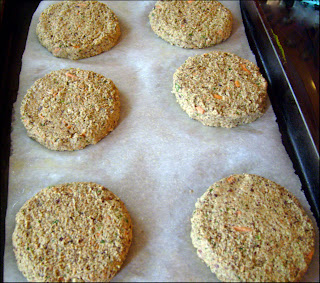 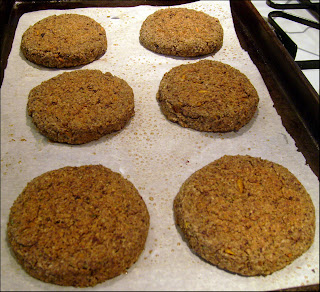 These burgers were fantastic! Not only did they taste great, but they were so firm. They held together better than any recipe I’ve tried so far. I was hoping to be able to grill them, but since it was so wet out, I just stuck the patties in the oven with the sweet potato fries before dinner to heat them. I’m so happy to have found this recipe – thanks, ladies! Look at this awesome burger Chase made. 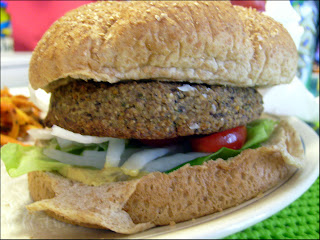 Like I said, I was bored and to kill time made 2 side dish salads. For the first one, I blanched some fresh green beans and added in corn, roasted red pepper, parsley, and onion. I made a balsamic dressing for it. This turned out nice and pretty and quite tasty. 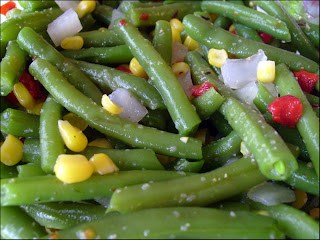 The other salad was inspired by an old VT recipe, Rice Salad with Sweet Corn. I cooked some brown rice in veggie broth, then made my salad by adding in steamed broccoli (no corn), red cabbage, green onions, and orange bell pepper, and dressed it with a lemon vinaigrette. This was really really delicious and again, very pretty as well. 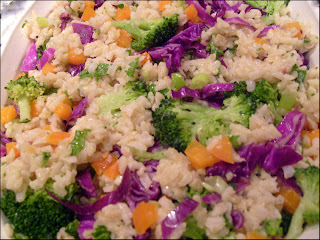 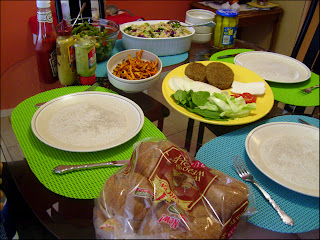 Finally, another must have was Amey’s strawberry peach ice cream. Her recipe is simply cashews, fruit, maple syrup, and a little vanilla all blended in the blender. You could actually stop right there and have the best smoothie of your life! But just take a taste and then go ahead and make the ice cream. I skipped the bun on my burger so I could eat this ice cream. I love it because it’s soy free, but mostly because it’s the best tasting and best textured vegan ice cream I’ve had so far. Thank you so much, Amey, for sharing your recipe! As you can tell from the picture, I had more strawberries than peaches, so my ice cream turned out quite pink. It’s beautiful on our Oreo cones. 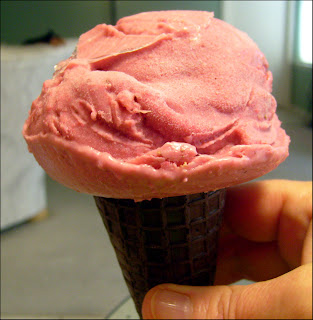 To our amazement, the sun came out while we ate dinner so we decided to head downtown and watch the fireworks display. 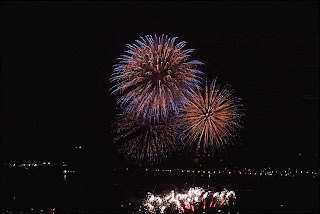 Thank you all again for your terrific vegan recipes!
Posted by aTxVegn at 7:45 PM

What a spread! I'm always amazed at how much trouble you go to in order to prepare a truly satisfying meal for your family. Cooking on a large scale really changes the dimensions of a meal, and it's fun to read your "menu plans."

It rained here almost all day (week) as well...at least the plants are staying nourished! Have a good one!

I love the side dishes you made too and the beautifully pink dessert!

Glad you got to see the fireworks display!

There's nothing ordinary about that 4th of July dinner- as usual, I wish I could be at your house and eat all your food! I'm glad you liked the baked beans- I'll give pinto beans a try some time- they are my favorite beans! That bean salad looks so fantastic. Ooooh, but the ice cream takes the cake. Do you have an ice cream machine or did you just chill it in the freezer? No matter- I want some of that beautiful pink ice cream action!

Wow, looks like I missed a few good posts with lots of great food!

The bean burgers sound really good, I just may try them this weekend. Does your ice cream have any 'milk' in it, or just cashews? Sounds interesting.

Judy and Bazu - no "milk" in the ice cream, and I made it in my ice cream maker. It's so good!

great spread you've got there!! I love how we can all share recipes with each other, and gain inspiration to use in our own kitchens - so great!

Hey! I actually forgot to give you credit on my blog, but I found out about Dhaba Joy by visiting your blog. I didn't know about it, so when I read that you liked the place, I decided to go. I wish I would have tried to oatscreme though.

Happy 4th Diann! I can't believe I missed the pizza post. I wish I had seen your burgers before the 4th, as we had a cooked food fourth (I've been "bad" for the last few weeks but now am getting back into it kickstarted by a juice fast this weekend). They look perfect.

I have green beans in my garden that I have no idea when to pick. Being a rookie gardener it's tough sometimes, to know when to pick the food.

Smokey looks big enough to start that thing rabbits do where they lick your neck when you're sweaty. Or maybe that was just an odd habit of the bunny I had when I was a kid. I hope Smokey does it for you - it tickles like crazy!

I have to try that ice cream and those burgers some time. What an impressive spread of food you have!

Everything looks wonderful. I have been craving baked beans so I am making these tomorrow! I am so glad your burgers turned out. We had the black bean burgers too! Yours look great. I will need to make your version too! Can't go wrong with burgers.

what could be more wonderful than your cornucopia of vegan treats? It all makes me drool, especially the ice cream.

mmmm!
What a feast you had! I'm so glad that you made the ice cream - and loved it! Looking at your post makes me want to make it again. I broke my ice cream maker, but my replacement part just arrived this week. Maybe I'll celebrate by making some ice cream for tomorrow! mmmm.

Also, just wanted to let you know how glad I am to see you posting and cooking, and not drowning! I've been thinking about you and all the rain... while we have boiling hot weather. Weird stuff.

Sounds like an excellent spread! Too bad about the rain, but at least it cleared up for the evening. As for me, I was praying for rain, but alas... Nothing. You picked out some great dishes to make an attractive meal that makes me almost wish I had celebrated at your place!

It all looks so good.. I have to check out that ice cream recipe... black bean burgers are one of my favorite things.... and wow... yours look great!

Looks like some great fourth of july food! The weather was (and still is) a bit of a downer. When will the rain stop?!?
I haven't tried making my own burgers yet, looks like fun. Love your salads and especially the ice cream!

Oh wow, those bean burgers look so good... Everything looks so good!

I am so glade you liked the black bean burgers, I really like what you did with the recipe to make them wheat free. Let me know how they hold up when you grill them.

Looks like a very fun Fourth of July in your part of Texas! What a great shot of the fireworks...and all the food.

You have been eating well my friend! (the pizzas look especially interesting loaded up with veggies that way) I am catching up on all your posts that I missed...