This post is a bit unusual for me in that it begins with a drink recipe. I’m sure I’ve mentioned my strict, self-imposed rule to never drink my calories. I don’t do smoothies or drink juices. I don’t drink beer. I might have a glass of wine or champagne on occasion, but generally, unless my ice cream melts has melted, I prefer to eat my calories.

But this is a special time. It’s Halloween. It’s the last day of the Vegan Month of Food. Tomorrow is my 3rd Veganniversary. Tomorrow is also Dia de los Muertos (Day of the Dead), which in many parts of the world is more special than its eve. So tonight I begin this post with a recipe from local chef and food writer Lucinda Hutson. You may remember earlier this month I posted her recipe for hummus and a picture of her fabulous purple bungalow. She wrote a guest feature in the paper about the traditional drink of Dia de los Muertos, Champurrado.

Friends have come to expect this frothy hot chocolate to accompany the Day of the Dead breads that I purchase at local bakeries. For centuries, Mexicans have devoured versions of this tasty and nutritional beverage; after all, chocolate is a New World offering. A cup of champurrado tastes both soothing and invigorating on a cold night. Spiked with chile, cinnamon and yerbanís (Mexican mint marigold) or anise seeds, its essence will surely awaken the dead.

Although traditionally made with water, milk makes it even richer, especially when whisked to a froth with a molinillo (a hand-carved wooden Mexican chocolate beater) twirled between the palms.

In a medium saucepan, mix together masa harina and 1/2 cup warm water and blend until smooth. Add remaining ingredients; simmer on low heat, stirring continually until chocolate and piloncillo are melted and mixture has thickened (add more water if needed). Whisk with a wooden molinillo or eggbeater until frothy. Pour immediately into small mugs and sprinkle with cinnamon.

I prepared a ¼ portion of this recipe, omitting the anise seeds (ick) and using several more tablespoons of brown sugar, because as much as I love dark chocolate it’s got to be just a little sweet. The warm Champurrado is thick from the corn flour and chocolate, and I couldn’t manage more than a couple of sips. How they eat a hunk of sweet bread with it I’ll never know. Oh, wait. I think I read somewhere that you can make it into an adult beverage by adding a shot of whiskey, so maybe that’s how! 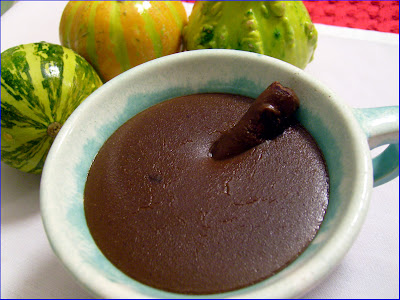 HOWEVER!... As any good foodie would do, after it was cold and before I put it away, I gave it another taste test. I tasted what was one of the best chocolate puddings I’ve ever had. It wasn’t creamy like a tofu pudding, but more like what I imagine the chocolaty oatmeal concoctions so many of you are enjoying. The masa flavor was unique and even though I was already stuffed, I wanted more. I probably won’t ever make it as a hot drink again, but it so quick and easy to make I will definitely make it as a pudding again. So do give it a try if you have an intense chocolate craving and want to try something different.
For your Halloween treats, let me show you more of the goodies I’ve tested for Ricki, and remind you once again to be on the lookout for her cookbook in a couple of months. Everything I’ve made has been incredibly delicious, and these were no exception.
Orange Tea Biscuit 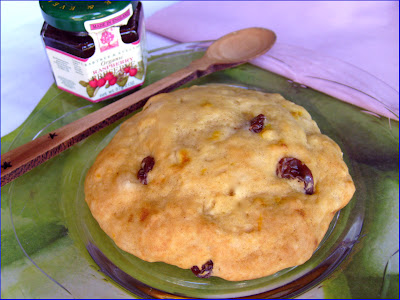 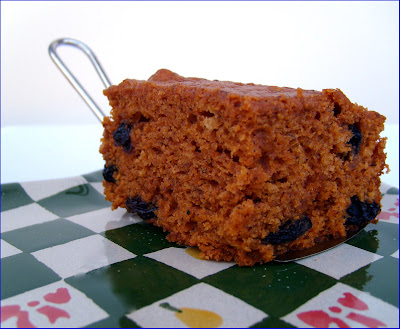 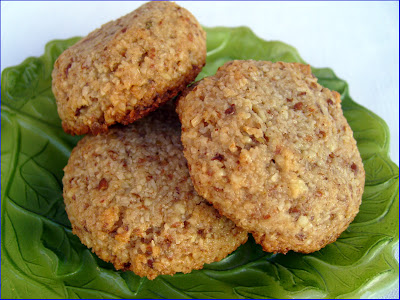 Finally, as this is the last day of MoFo, I just want to say how much I’ve enjoyed this incredible month of vegan food sharing. I’m amazed at how many fabulous chefs took part in this event! I think back to when I first started blogging about 2 ½ years ago. I tracked about 20 blogs. Now I can hardly keep up with the 200 I try to follow. I know many of you are used to posting daily, but I am not. I hope you don’t mind if I take a few days off, and then I'll resume my normal 2 posts per week.
Posted by aTxVegn at 6:09 PM

You were AMAZING for MoFo, Diann!! As always, you featured tantalizing, innovative, and delicious treats :0)

You definitely deserve a few days off from blogging!! Enjoy!!

Congrats! You made it! I just watched a Halloween show on the food network and watched them make this chocolate drink. I too like to eat my calories. In the winter I do love a cup of hot chocolate on holidays. Take a few days off and we will see you next week.

Diann,
I like that idea of not drinking your calories. I second that. I need all the fiber I can get. But you Nov. first treat would be a great exception to the rule!

everything looks so delicious!! just found your blog not too long ago and i thoroughly enjoy each and every visit!!

What an interesting philosophy - I would think you would be the queen of healthy smoothies (since you're the queen of everything else that's tasty and healthy). (: But the occasional chocolate pudding/cocoa sounds delicious. Happy Halloween!

Congrats on your first veganniversary! All of your MoFo posts have been amazing including this one. I had a lot of fun reading your blog.

I have loved your posts and am in awe of your tenacity - so many posts! Congrats to you! I totally understand if you need a few days off, I know I do!

Interesting recipe and post. I like your idea of using this as a pudding rather than a drink. And I'm definitely with you on not drinking the calories—except on special occasions. Add my ick vote to yours for anise!

glad i'm not the only one who's not the biggest fan of anise seeds. that's too cool that the recipe worked great as a pudding. i might have to try this as it's sounds really yummy!

thanks for all the rock'n MoFo posts too, Diann! wahooooooo!

i want those orange tea biscuits!!! they look amazing. and those macaroons are neat looking. i've never seen ones like that. are they made with almond meal or flax seeds?

You have definitely earned a vacation from blogging! You posted amazing posts every day for the whole month!
That champurrado looks so good! I had never heard of anything like that before.
Ricki's goodies always look delicious!

I love the look of that pudding. I'd never heard of Champurrado before! And I love that green plate under the macaroons--which look great (like all your testers--thanks so much!) :)

Enjoy your time off. We'll miss reading your posts and will look forward to your return.

the Champurrado sounds very intriguing. I almost bought some masa yesterday but decided I have TOO much food in the pantry!

Congrats on getting through veganmofo!

Mmmmmm, that chocolate drink sounds lovely! I am afraid I have no such resolve when it comes to drinking calories. Oh well :)

happy veganniversary Diann!!
I hope you're enjoying the day off after 31 days straight of blogging. I know I am!
:) (finally time to read a few blogs!)

I totally forgot about champurrado! Thanks for posting the recipe.

Ooo that Champurrado looks delicious!! (and so does that spice cake, you have me hanging out for that cookbook!)

Congrats on finishing VeganMoFo! You did an awesome job and I really enjoyed your posts.

The pudding and all your tester treats look amazing!

oh my word. look at the impeccable texture of that champurrado thing!

oooh yummy treats! and i, too, do not like to drink my calories! though i do make an exception for beer, oops. and the only way i'll drink a smoothie is if it IS my meal haha... so i'm with ya on that one. food is so much more worth it, anyway.

woah, that looks intensely good, that champuraddo stuff! I don't usually drink my calories either... but I love the pudding route. oh, and those testers!! yum. :P~~

i love !!! champurrado here is one of the most traditional beverages and in these cold days is very warming!:)

That looks like chocolate happiness. Great mofoing. I'm glad I found your blog.

Happy veganniversary! I loved all 3 of those Ricki recipes you mentioned. :)

All that chocolatey goodness has my mouth watering...awesome...the orange tea biscuit looks pretty yummy too...looking forward to seeing the recipes when the book comes out :-)

Those Macaroons look so great. I want them!!!