This weekend’s MoFo Iron Chef challenge was to create a recipe using pears and nuts. This was a no-brainer for a salad lover like me. I hope you don’t mind another salad recipe.

To make the spiced pears and pecans, put 1 cup water, ¼ cup sucanat, and 2 teaspoons cinnamon into a small pot. Bring to a boil, then lower the heat and simmer about 5 minutes, until thickened and syrupy. While the syrup is simmering, slice one pear thinly and put into a small glass casserole. Add in some pecan halves. (I estimated one pear and about 15 pecan halves for 4 people.) When syrup is ready, pour over pears and pecans and refrigerate for about an hour or until chilled. 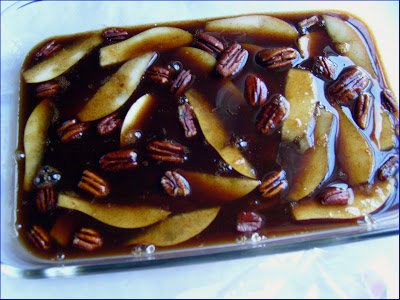 When ready to serve, plate some greens, add the pears and pecans, and use the extra syrup for dressing. 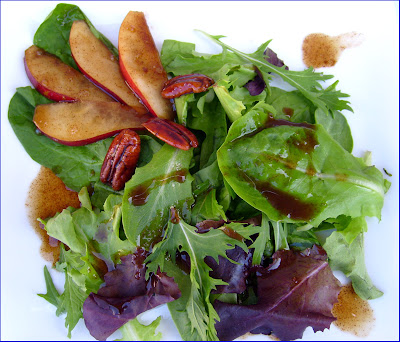 It is a perfect salad. I don't think I will try this with canned pears though I will just have to wait until the grocery store and I have a date. :o)

That does look like a lovely salad. I rarely eat fresh pears (usually bake with 'em) but this looks worth trying.

This looks so good — easy, too. We have a ton of pears from our CSA as well as salad greens. Will try this tomorrow. I bet a little crystallized ginger would go well with this.

What a beautiful salad! Your use of the pears and nuts is so creative! YAY!!

Oh my gosh, yum! I bet that would be good over a baked sweet potato as well.

That is making my mouth water!

That's a fabulous challenge and I really like what you came up with! Thank you for sharing this.

What a fantastic way to use those ingredients. That looks so delicious!
Well done.

Oh my! Pears are just so wonderfully tasty. Thanks for a great couple of photos. Yum Yum.

Such a classy salad! Could we ever get tired of your salads? I'm thinking NO!

i agree with shelly - very classy! and creative. mmm..pears.

of course i don't mind another salad post! i loooooooove salads - and this one is no exception - it looks AMAZING! mmmmmmmmmm!

What a wonderfully simple and creative recipe,I absolutely love this...there is an award waiting for you at my blog,please check it out :-)

I don't know why, but I don't like my sweets (fruits) in one bowl with savory stuff (veggies), but this looks appetizing even to me!

that salad looks so elegant. i'd probably end up eating the pears and pecans out of the pan haha i'm definitely a "sweets" person.

That looks awesome! I just threw out a couple of over ripe pears today out of frustration, I wish I had known how to make this.