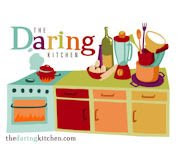 The Daring Bakers has expanded and now includes Daring Cooks! This is the very first challenge - Ricotta Gnocchi.

The recipe was chosen from the cookbook by Judy Rodgers, named after her restaurant, The Zuni Café Cookbook.

You may have noticed that I rarely post meals featuring pasta. I have never been a big fan of pasta, or cheese for that matter. That fact made this challenge extra challenging, as I have never made pasta of any kind. Shoot, I have never even eaten gnocchi and I’m old! I think I can say I have now eaten gnocchi – at least what I made looked like gnocchi – but this was one of the weirdest cooking experiences I have ever had. Fun, but weird.

First I needed vegan ricotta. I’ve had the crumbled tofu ricotta before, but I decided this time I wanted to be able to eat my creation. I found an outstanding nut based, cooked ricotta from Chef Jason of Vegan Culinary Experience, February 2009 edition. This was the lightest, fluffiest, freshest tasting ricotta ever. I will make this again for pizzas and lasagnas, and I’ll give you the recipe at the end of this post so you can love it too! This was the weirdest part of the challenge, but the most rewarding. I cooked cheese! And it was so easy. I apologize that this is the only picture I have of the ricotta. It was taken when it was just done boiling and it is actually much whiter than this. (It was also on my taco salad on the previous post.) 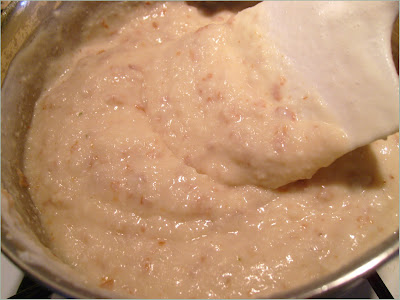 The gnocchi recipe we were given called for beating eggs, cheese, butter, and herbs of your choice into the ricotta. Next you form the gnocchi, then coat it with flour. I think I used chickpea flour. Then the gnocchi is boiled, and then ultimately fried. I didn’t use any egg replacer or fake parm or margarine, because my ricotta was already so fluffy, but I did mix in parsley and oregano. And I would have been happy skipping the boiling step completely and going straight to the frying pan. But I did boil. Here’s the *tester*. I was unclear about the timing of this instruction, whether boiling for 3 minutes began as soon the gnocchi was dropped, or after it floated back up to the top. 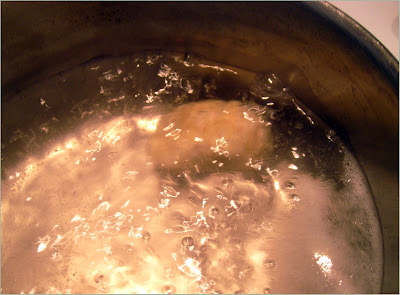 I left the tester gnocchi in too long and it fell apart. 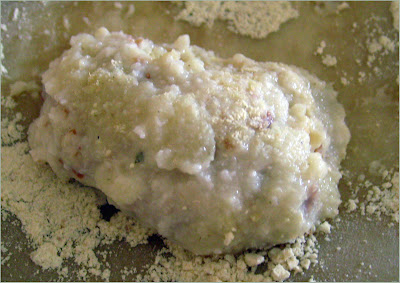 I only made six gnocchi, including the tester. (The rest of the ricotta did not go to waste!) The remaining gnocchi boiled up just fine and I was able to fry them up nicely. 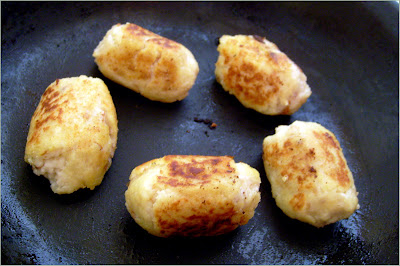 I made myself a hearty veggie sauce and had a delightful dinner. I’m not such a gnocchi virgin to not know that sauce goes on top of the pasta. I merely wanted to taste the gnocchi naked. And besides, the cheese goes on top, right? 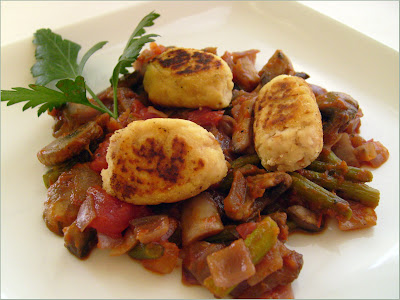 Now for that recipe!

Directions:
Bring the water to a boil and blanch the almonds for 1 minute. Place the almonds and the hot water in a food processor and process until very smooth. This will take a minute or two. Add the rest of the ingredients and process again. Place this mixture into a small saucepan over low heat and stir until thickened. Remove to a bowl and refrigerate until set.

I think this made about 2 cups and should be enough for a pan of lasagna. Enjoy!
Posted by aTxVegn at 6:30 PM

This ricotta does sound easy. I think I'll give it a try.

And your gnocchi look so cute nestled on top of the pasta. I thought gnocchi were made from potato dough — didn't realize they were made from ricotta as well.

I loooooooove gnocchi!! I will definitely be trying this at some point, looks awesome :)

Your dinner looks so delightful!
I've never eaten gnocchi before but it sounds easy to make. I would give it a try soon, thanks for the recipe. =D

Soy free vegan ricotta gnocchi. How creative. Personally, I would have been afraid that they all would have fallen apart. I think, in my case, I will stick to the potato variety and buy them in a store. Why you are a daring cook and I am not.

Very cool to see how you veganized this recipe, it definitely sounds like a challenge! I wish I could have join as well, but I just don't have enough time for another commitment... Oh well, I'll just live vicariously through you and fawn over those delicious pictures of yours. ;)

I made mine with nuts and tofu- I'll have to try your's - it looks delicious!

Really impressive outcome. I would never have figured out how to adapt it.

Your gnocchi look wonderful! I'll be sure to try that ricotta recipe very soon

Oh yum! I LOVE gnocchi!! And yours turned out beautifully! I've only made them once and it wasn't very long ago....it was quite a process.

And thank you for the ricotta recipe! I can't wait to give it a try!

This is so cool, Diann! I am going to have to try this recipe - I knew there was a way to get around the tofu!

I finally found whole wheat lasagna noodles, so I hope to try out this ricotta recipe soon!

Those sound (and look) fabulous! I am definitely giving that ricotta recipe a try.

My fave raw ricotta ever, I like it so much better than tofu ricotta:

Oh neato! I've always loved the daring baker blog posts, but I feel like I could actually participate in a cooking one. I'm not the world's best baker, but I feel confident in my cooking skills. I'll check it out.

I love how you've roasted your gnocchi! Perfect :)

i can totally see this baker’s challenge as being tough for you with not caring for pasta and having never made it, but i’m glad that you took on the challenge, Diann! that ricotta looks amazing – fluffy and yummers, fo ‘sho! i think your gnocchi is the cutest! i love ‘em all sitting in the pan together; they’re adorable – and i love your idea to put the gnocchi on top of your scrumptious sauce so that you could really taste them! mmmmmm! thanks for the ricotta recipe, Diann! totally going to have to try this soon – once the summer brings us tomatoes and squashes we’re going to make a summertime lasagna and use your ricotta recipe! i can’t wait!

Wow. This looks amazing, and I'm so impressed that you veganized something containing crazy amounts of dairy and eggs, and also managed to make it soy-free! Major vegan props to you, Diann!

(P.S. I'm now not regretting my decision to skip joining the daring cooks for the time being. Holy heck those gnocchi sound complicated! What happened to plain ol' potato and flour versions???)

yum! i'm drooling over yours, for sure. i love the bed of chunky veggies!

Yum, that sauce looks like a ratatouille! It's definitely the kind of sauce that that gnocchi goes on top of!

Thanks for the ricotta recipe! And the gnocchi looks so nicely browned. Yum.

Sounds like you really lived up to the "daring" name!! Your gnocchis look perfect.

I don't think I've ever had gnocchi...it's just not something that ever appealed to me. I'm a pasta girl for sure. The ricotta sounds fantastic though! I always default to tofu ricotta, so next time I'm craving it I'll have to try this one.

Our family recipe for gnocchi does not call for cheese or much of anything outside of potato flour (or potatoes).

These look more like cakes than the gnocchi I know BUT that doesn't take away from the fact that they look (and sound) delicious!!