I finally got to serve dinner from my own kitchen on Sunday night. We had the Oscars on, but since we hadn’t seen any of the movies that were up for awards we weren’t exactly glued to the tv. I know many of you watched and prepared clever party foods, but I told Chase I wanted to make Barbecue Sandwiches. He picked all the sides.

I apologize for these rather boring food photos. They are just candid shots hurriedly taken so hungry diners could start eating.

For the barbecue I made seitan, chopped it up in the food processor, then let it sit in barbecue sauce overnight. I used the recipe and method from Chef Jason of Vegan Culinary Experience. I was hoping for a more shredded style seitan, but chopped worked out fine. 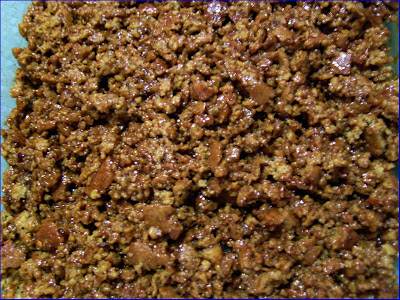 I warmed it up before serving it on burger buns. Chase built his on an upside-down toasted bun with crispy broccoli slaw and hot hot hot sauce. 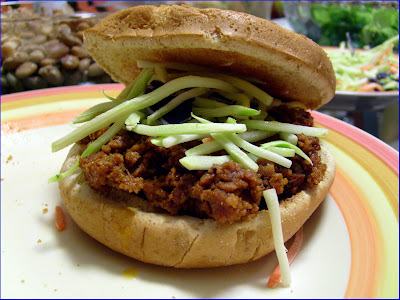 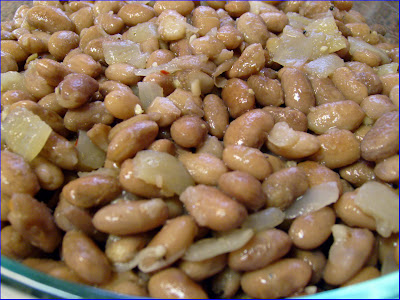 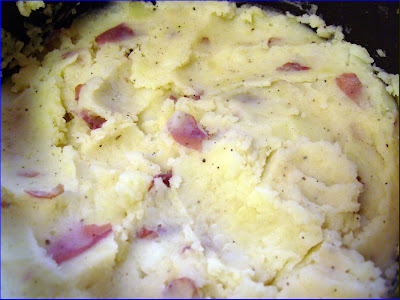 ... and a great Macaroni Salad. I used a recipe from La Dolce Vegan as a guide. I started with my favorite Eddie Spaghetti veggie corkscrews. 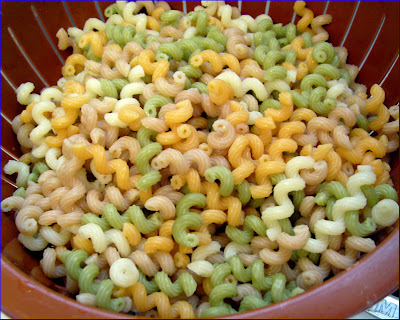 I added in carrots, green onions, red bell pepper, and chopped fresh spinach, then made a dressing with Tofutti cream cheese, milk, vinegar, agave, and lots of herbs. So tasty. 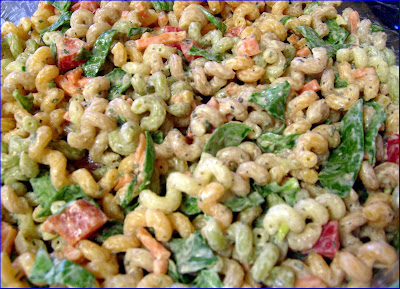 I’m glad everyone like it cuz I made a big huge bunch of it! 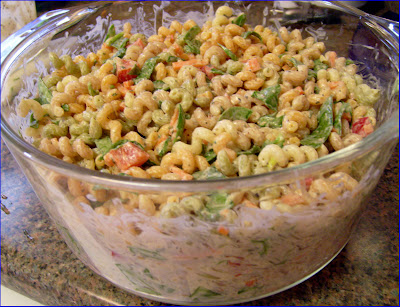 Broccoli was served too. Here’s our table full of food. 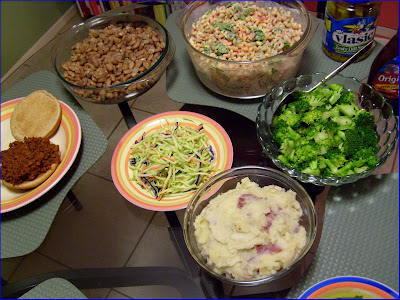 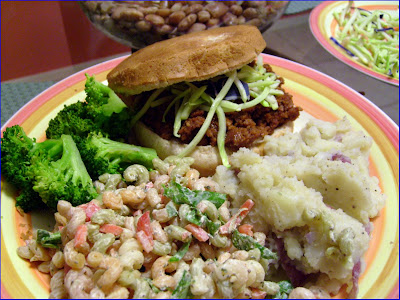 Since wheat meat on whole wheat buns is not for gluten free folks, I had a bunch of broccoli, pintos, and leftover mushrooms. I made myself a mushroom stirfry the night before with my Asian market purchases and it was heavenly. Fresh shitake and enoki mushrooms, snow peas, daikon, and onion. I adore shitake mushrooms and stirfried daikon! 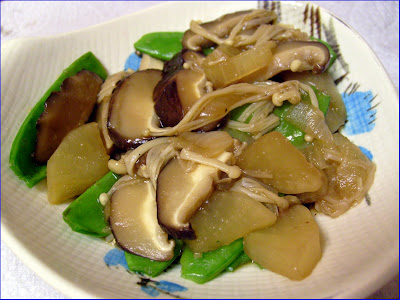 We had dessert too, but it can’t be revealed until Friday. See you then!
Posted by aTxVegn at 7:06 PM

I always look forward to your Sunday dinners!

Not Another Omnivore said...

Oh wow, that BBQ "pork" plate looks great, it's too bad you can't eat it. Although your alternative looks equally delicious!!

The barbecue looks tempting as does the rest of the meal. Makes me wish I had more time to cook. I love your Sunday dinner idea. It's great that you have so much family around.

and I always love your Sunday dinners.. I told my kids (my oldest is senior) about your Sunday dinners and how we have to figure out a way when they graduate to have a Sunday dinner like you do! I even showed them pics of Chase so they could see I'm not the only vegan blog mom out there! lol.. I have to admit, I am scared to death about my kids growing up! Or sad... and excited all at the same time! Was it hard for you when Chase left home?

Re your comment.. I have taught so many cooking classes and cooked for personal chef clients, so packing up for a big cooking session is second nature to me... in the beginning it was quite overwhelming to remember everything...

That pasta salad looks delightful! I'm usually not a fan of heavily dressed salads, but I would make an exception for yours :)

Glamorous- perhaps not, but delicious- oh my goodness yes! What an amazing looking spread, as always!

yum my mom and i actually had a personal cooking class with jason at our house over the summer! he's such a nice guy and we made that exact same barbecue seitan recipe, i couldn't stop eating it, just with a spoon!

i wanna come to your house for dinner! this is a lovely feast!

That pasta salad is calling out to me! Love the comfort food theme.

I didn't watch the Oscars at all (no that's a lie, I watched them walk in for about the first 2 minutes).

I was planning on having some kind of bbq seitan this week. I love the idea of marinading it overnight! I'll have to try that. I desperately want one of those burgers!

That's a perfect barbecue plate indeed!
I saw "Milk" exactly the night before Sean Penn won the Oscar. On the Other hand, I didn't watch the Oscar night because here it is indeed in the middle of the night ha ha.

Your mac salad is so colorful! And the potatoes looks so decadent. Yum.

i can't wait to read about (and see) the dessert! your spread looks so gooooood! the pinto beans 'n mashed taters are my fav - and the veggie corkscrews are the cutest! what a pretty macaroni salad! mmmmmmm!

that is quite a spread. those mashed red pots looks great. and i like the idea of the shredded seitan... kind of like pulled pork. hmmm....

What a great meal! the Macaroni Salad is so colorful and pretty!

Those BBQ sandwiches look scrumptious! (but without the hot hot sauce because I'm a wuss). :)

Everything you make always looks so good! I've never seen pasta like that before- totally adorable! I never make anything out of La Dolce - I should check out that recipe.

it all looks so wonderful! i like that bbq seitan idea, i'll have to try that!

Everything you posted looks so delicious! I love pinto beans, and that mac salad and the mushrooms look soooooo good. Yum!

The pasta salad looks so good! My favorite pasta salad is also from LDV, but it's a different one, with balsamic vinegar.

Now you've got me craving bbq.

That sandwich plate is heavenly!

Wish I had been there Diann :)

I am pretty sure that you need to make me Sunday dinners now too. I shall patiently (and eagerly) await the dessert.

The Macaroni Salad looks so good! Would you mind sharing the proportions of the ingredients you used to make it?