I thought I would get off a quick post before dinner on what I’ve been cooking lately. 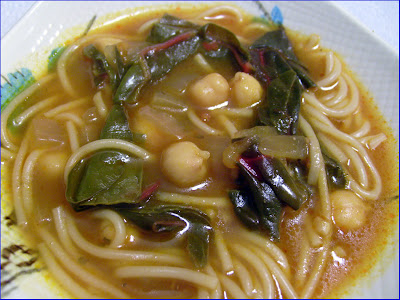 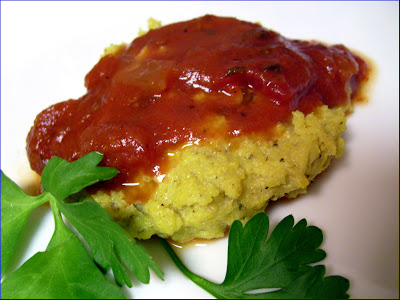 Spicy Indian Eggplant. Only Dynise could turn me into a fan of eggplant! I also made another soup from Nava’s new book, Vegan Soups and Stews for All Seasons. This is the Curried Lentil, Potato, and Cauliflower Soup. I added in some carrots and a little cumin. It’s delish! 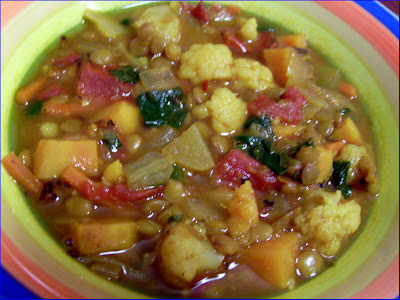 A stirfry, something I make at least once a week. This one has broccoli, peppers, onions, shiitakes, and daikon. 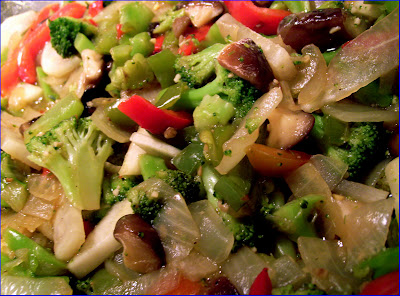 With my last purple carrot, I made a savory oatmeal. I’ll be making this more often. It is very filling and a great new way for me to enjoy oatmeal. 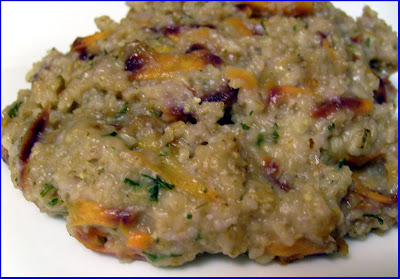 I found a new veggie burger at Costco yesterday. They were sampling them and after I had a taste, I had to buy a box. Keep an eye out for these! 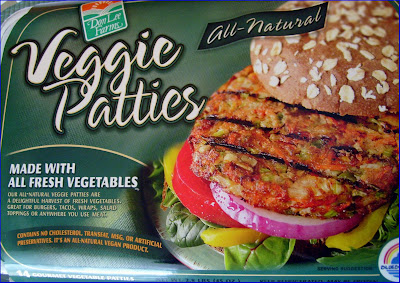 Tonight I’m taking Greek food to my mom’s for dinner. I made Vcon Moussaka. It looks like it turned out just right. 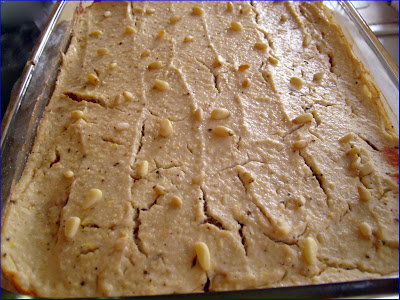 See you later this week with a Greek dinner review!
Posted by aTxVegn at 4:38 PM

I have been eating those veggie burgers from Costco for forever-best store bought ones I have found. I grill them up extra crispy on the outside, cut into sticks and eat as fries.

Are those veggie burgers gluten-free and soy-free, by any chance??

That oatmeal is so surprisingly colorful and pretty!

Your soups look awesome too, you're making me hungry :)

VeggieGirl, oops, there is a little wheat in these. Guess my portion will go to Chase :(

Oh my goodness, this ALL looks and sounds so fanastic. Can you come cook in my kitchen?

Those burgers look delicious as does everything! I can't wait to hear about the Greek dinner!

Mmmm I love the look of that herby polenta! And those burgers and YUM! Why haven't I made the moussaka from V'Con yet? It looks amazingly good!

All of those photos looks great! Can't wait to hear how Greek night went--I cooked southern greens & beans & grits for my mom tonight. She was pleasantly surprised by liking it!

You are such an awesome recipe tester! Everything looks amazing, and your soup from Nava's book looks so chunky and perfect! So does your stir-fry, I am a big fan of colorful stir-fries!

Thank you for the veggie burger tip, I'll remember to buy them if I see them!

I just LOVE the idea of that savory oatmeal!! Sort of like a pilaf, but with oats. . .sounds amazing. And I'd be a fan of that eggplant, too, I'm sure.

yum yum yum for everything! especially the herby polenta!!

those are some tasty tester yummies! i really like the lentil, potato, and cauliflower soup - nice call on the additions, too! mmmmmmmmmmm!

the moussaka looks great & i look forward to the Greek night review!

that so cool on the tasty new burgers! i'll keep an eye out for them!

glad i'm not the only one putting carrots in my oatmeal! sooooo delicious! i love it!

That moussaka is so good - I only made it once, but loved it!
You're making such delicious things, I need to hang out at your house!

i'm looking forward to your Greek night review post! That VCON recipe is on my list to try.

Those chickpeas in that soup look beautiful! I love chickpeas, but some tinned ones can be hard. They put something in them to keep them from getting soft. I have found a brand in the UK called Natco. They're grown in Italy and they don't add anything to the chickpeas so that they cook up big and plump and soft, and they make the best curries! We love chickpeas--I'll have to try your soup recipe!

Purple carrots! How cool is that! I'm a fan of the savory oats as well.

And I love that moussaka! I made it awhile back and scarfed it all down by myself.

i'm so excited for this book with all the great eats i've seen on tester sites!

Everything looks so delicious, especially the savory oatmeal. Could you share the recipe?

I'm seeing eggplant everywhere this week... I must get some!

Potato and cauliflower are sooo perfect for any type of curry except Thai where I tend to use broccoli more.

I absolutely LOVE the idea of putting veggies in a savory oatmeal. Although I usually make oat bran instead. I will definitely keep this in mind as a use-up-the-veggies-in-the-fridge kind of meal.

I know that this is an older post, but is there any way that I can get these recipes? Especially the savory cookies. Yum!

Kelly H: I'm sorry but I make it a policy not to post recipes that I've taken from cookbooks.

And the savory oatmeal is not in cookie form. I know it kind of looks like a cookie, but it's just a bowl of oats that I added veggies to.