This was the most pie fun I’ve ever had! I baked a giant snickerdoodle cookie you eat warm, all sugary and cinnamony. It’s not healthy, it’s not gluten free, but it is vegan and incredibly delicious. There’s gooey cinnamon covering the crust, then super soft white cake, then crispy gooey cinnamon on top. I only wish I had thought it up myself. 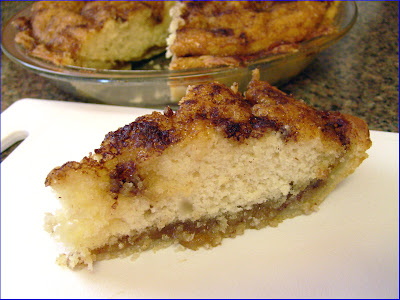 I veganized this recipe. Here’s the vegan version.

* I used the pie crust recipe from Sinfully Vegan and I do not recommend it. It’s oil based and this pie needs a margarine crust. Also, this crust wasn’t sturdy enough. It kept sliding down the rim.

Directions:
Heat oven to 350 degrees. Prepare your pastry and put into a 9-inch pie plate. Brush with melted margarine.

Mix together the raw sugar and cinnamon. Sprinkle 1 teaspoon over the pie crust.

Make a syrup by combining the ¼ cup margarine, brown sugar, water, corn syrup, and ½ teaspoon cinnamon in a small sauce pan. Stir and bring to a boil, then boil gently for 2 minutes. Stir in 1 teaspoon vanilla. Set aside.

In your mixer, beat the softened margarine for a minute, until creamy. Stir in both sugars, baking powder, salt, and cream of tartar. Mix until well combined. Stir in egg replacer and vanilla. Slowly mix in milk, then flour. Spread evenly over crust. 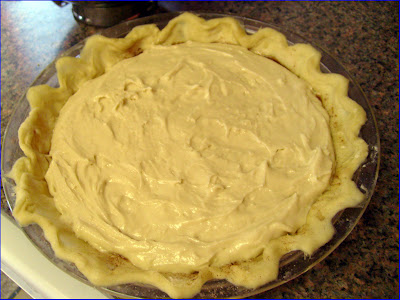 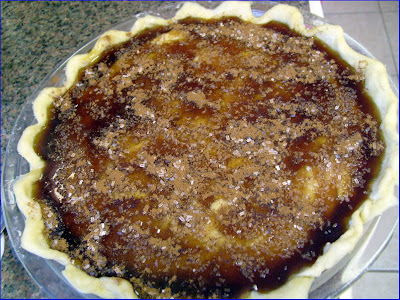 Cover edges of crust with foil.

Owning a pie shield makes me a complete baking geek, doesn’t it? 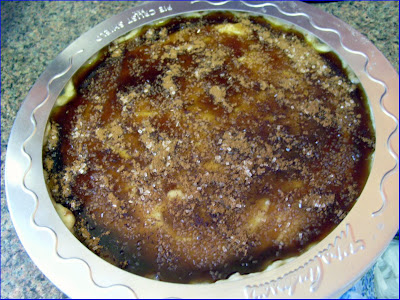 Bake 25 minutes, then carefully remove the foil. Bake 15 – 20 minutes more or until top is puffed and browned and a tester comes out clean. Cool 30 minutes. Serve warm.

It looks kind of funny when it comes out of the oven, but it smells divine. 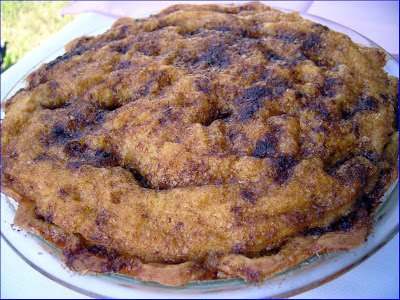 Better go make it now, then have yourself a nice warm slice. 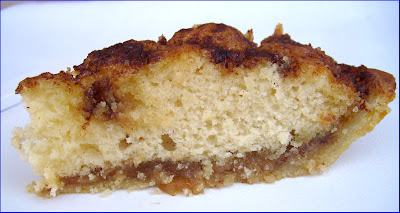 **faints of a sugar-induced coma**

Holy Batman, that looks totally gorgeously delicious! I wish I could beam over and steal a piece of your counter top. Mmmmmm.

By the way, I have two pie crust shields, and I used them every time. They really help!

I need a piece of that pie! Well, I need the whole pie actually! :P
Thanks for the recipe!

OMH is right!! That looks amazing.. I can only imagine how wonderful it smelled and tasted!

Wow - look at that gorgeous sugary cinnamon brown top! Cookie in pie form, what could be better?

This is ridiculous! in a great way... so i think i'm taking some baking recipes from one of the old bakers who worked at dabha joy/classmate... i'm pretty excited for it... :)

I'm hoping to develop more recipes for ppl to test...

What a fabulous idea! My mom used to make a pie called "Chocolate Cake Pie" or "Chocolate Cookie Pie" or something--similar idea, with basically a cake baked inside a pie shell. Yummmmmmmm. And I LOVE that crust shield--I think I need to get one now! ;)

this looks so wrong but oh so right!

O. My. Gosh. That looks amaaazing!

This is just AWESOME!!
What a FANTASTIC recipe!
You've just blown me away!

That looks so amazing! Can't wait to make it - thanks for the recipe!

this does look super yummy! but...isn't it...a cake? on a pie crust? or am i being too technical here and should just shut up and make myself some damned snickerdoodle pie already?

Allularpunk - it IS cake in a pie crust, but it holds the goo together. It's okay to be technical. Think of it like fudge pie or brownie pie. How do you feel about Boston Cream Pie? ;)

i LOVE a snickerdoodle...so I imagine this creation is beyond words!

Oh wow! I can't even think of the words to say how good that looks!

don't even get me started on boston creme pie!

snickerdoodles are one of my fave cookies! i bet this pie is so so delicious!!!!!

Dang! I love pies that are made from other desserts. It looks like it could almost be a bread pudding kind of thing but even better because it's go the snickerdoodle action going on.

That's so awesome! It would be a perfect "birthday cake" for my snickerdoodle-loving friend!